Nature Education At Happy Kids Budapest: Why Do We Let Children Play With Sticks 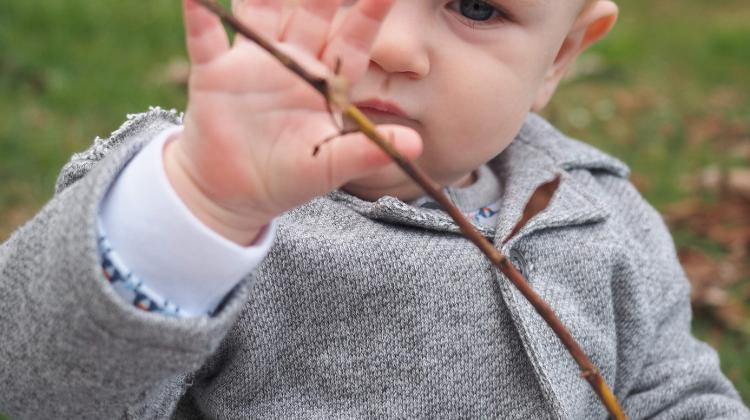 A world without sticks... Based on parental requirements and rare unfortunate events new laws are created on a regular basis that further limit the ways children can engage with the world around them. As a society we tend to react and leap to every worst possible conclusion in every case scenario. Parents, educators see a children reaching heights, discovering their own limits and the first thing they think of is how the children can be affected for life when they might slip, and a summary is easily stated and it does not sound "Look at how well they exploring their own knowledge!" rather “Close that area off and adjust a risk assessment to eliminate this activity!”

The idea seems, indeed harmless, meaning they try to protect children from every possible source of danger, however, it is, indeed more harmful than a fall could be: they also prevent children from having the kinds of experiences that develop their sense of self-reliance, their ability to assess and mitigate risk, and their sense of accomplishment, resulting in limited skills and knowledge for life.

From an educator or parent point of view there should be nothing more exciting than to see little children taking initiative for their own learning, planning their activities and gathering the necessary supplies prior to heading for their desired places. When young people are engaged in their learning on this deep level, they will their voice due to adults giving them the power of choice and teaching them how to make good choices.

The longer young children plays the more meaningful their play becomes. When an open-ended play opportunity is extended both short term and long term, meaning they will be allowed even encouraged to play for longer as many times as possible, the more the children discover, the more creative they become, and the more they “make”, “do” and “understand”.

Nature play is probably the best possible kind of open-ended play: for its richness in resourses, for its healthy environment, for its any stage and any age accommodating quality. In his book Last Child in the Woods, Richard Louv states that being in nature was not understood and seen as a passive activity in the beginning of the 20. century, the focus was rather on “doing something”. Being in the nature meant: being able to fully engaging in the environment and interacting with it.

Natural resources, especially sticks probably are the world’s oldest toys, even animals play with sticks. Children, almost any child, will find sticks an endless source of make-believe fun. Sticks can turn into magic fairy wands, bows and arrows, kindling for fire and building material. When children incorporate sticks into their play, they plan, they solve problems, they share and manipulate, and their creativity and imagination develops effortlessly.

They discover nature as they trying to find the required stick for the defined purpose, act gain meaning and real successes emerge. Children engage in sports with sticks, they create, they tell stories and remember. Stick are original building blocks for developmental play, both physically and mentally. Sticks, being completely open ended promote meaningful free play—the freedom to explore, invent, try, study and correct – doing so without the need for prior planning.

Coming in different sizes, weights, lengths, shapes and forms sticks encourage even the shyest of children to look around. Sticks are all over the world, they are natural, sustainable and free. Nothing proves more the versatile nature of sticks that artists, craft professionals, designers and even architects find use of sticks in master pieces, baskets, household items, and buildings. Playing with stick is an irresistible activity from for both children and grownups, from fishing with a rod, through drawing with a pen to using a wooden spoon, all derives from the same roots, from centuries ago.

Despite of the changed physical, social, cultural, economic and political landscape children of today still have the complex, innate connection to natural world what is biologically driven and instinctively determined.

Sticks in other worlds...

Research studies of animal species reveal that there are many ways to play with sticks: a study group that looked at wild chimpanzees in Uganda has found that the young females were using sticks as dolls, they were holding the sticks while they slept and patting them like babies, making a separate nest for a stick, twice as thick and long sticks as those that they use as probing tools, to hit each other, or poke into holes looking for water or honey.

This behaviour, they claim has never before been seen in the wild and appears to be unusual among non-human primates. Birds also drop and then catch sticks again whilst they are flying, certain types of fish jump over floating sticks for no particular reason.

Members of the above mentioned research group, Sonya Kahlenberg and Richard Wrangham who spent 14 years watching these animals suggest, that the stick-carrying chimps are playing at being mothers. Their sticks are the chimp equivalents of human dolls and the chimps treat them like pretend infants as the sticks have no other obvious use. Also, they observed that females carry sticks more often than males, even though they’re not more likely to use sticks in general. This aspect of the research, I think, could be biased.

Public believes that boys, and mainly boys, like sticks because they are serving multiple purposes that are needed to accomplish boyish behaviour, like make-believe wars —a long, thin piece of wood can serve as an imaginary arrow or sword –, like sizing up power or aiding sports.

There is no particular research carried out proving why exactly children like sticks and do boys like sticks more girls that relevant to this question, so stating that boys are more inclined to play with sticks preferring it over other researches is simply based on observation. However, it is probably very simply the outcome of the common belief, as adults think boys like sticks more than girls, therefore accept boys playing with stick more readily than they acknowledge it as valuable playtime for girls.

A boy playing with sticks is often overlooked as “boys just being boys”, and more open-minded parents would even provide opportunities for boys to pursue this need, whilst – simply – they will not encourage girls to do so. Boys with sticks could also be seen as a result of the fact that boys are very particular when selecting resources for their self-initiated activities.

Studies of children's self-directed choices and preferences even show that boys tend to avoid certain items in free play, whilst girls are flexible and are likely to engage whatever draws their attention at the time, from a very early age (an experiment has found that even 3-month-old boy babies spend more time staring at trucks than dolls).

To some extent I think the preference of boys is purely cultural: parents provide what they class as gender appropriate toys for children from a very early age. Therefore, it is likely to happen that a 3-month-old boy already stares at a car with a feeling of familiarity (whilst he has not seen a doll before), possibly being in the process of internalising society’s unspoken rules about which objects should be used and which ones he should avoid, based on the parents showing approval for certain kinds of play but not others.

Sticks really provided an open-ended curriculum. There is not an age group, not a development area where sticks cannot be used, including both indoor and outdoor activities. The following ideas illustrate the versatile nature of sticks as educational resources.

Communication and literacy: Make a talking stick to pass around the turn of being able to speak, make stick figures and create their story (e.g. where did they come from? What are their names? What would they say if they could talk? Who would they send a postcard to? What would they write on it?), find rhyming words in the Stick Man story and create the group’s own rhyming dictionary, turn the Stick Man story into a manuscript of a play and change parts of the story or the outcome, make a list of the different ways that sticks can be used, make up a game that uses sticks and write the instructions

Use sticks to create children’s family, create (with sticks or with drawing) a map showing and acting out the journey that the children take to the setting, make a timeline showing the different events of children’s lives, make an animated version of the story about a stick by taking a video of the children playing and speaking and by using children’s own images (drawings and photos), make a “Nursery Stick Man” that children can take home and tell its story in their houses on the following day, make a family tree for the children from sticks and photos, try to create faces and facial expressions using stick or personalising own stick men

Physical development: Try to copy the movements of Stick Man from Julia Donaldson’s story (e.g. scratch, scrape, wiggle, jiggle, poke, shove, nudge, hop, jump), explore with the children what other words can be used to describe movements, observe animals as they use sticks and try to mimic their movements (e.g building nests) to develop directionality and body image, use large sticks for dent building to encourage gross motor development, hand-eye coordination and laterality, provide opportunities for weaving to develop fine motor skills

Understanding of the world: Think about how do humans and animals use sticks, collect sticks in the nature and note where they can be found, think about why things float, test and measure different materials to see if they float, explore how sticks were used throughout human history, set out on archaeology trips (dig holes and see if sticks could be found underground), observe sticks from different places and different trees, using sticks, twigs, and leaves, glue parts on a piece of paper and label the parts of a tree

So let’s stick together...

What stick are really good for, however, is beyond these activities. Sticks represent reconnecting to the natural world that the lack of which is producing ill effects in both mind and body. Sticks represent the well-meant, forward-thinking parenting and educating that can close “the kid-nature gap” as Richard Louv called it: "We should not think of a child's experience in nature as an extracurricular activity, it should be thought of as vital to children's health and development."