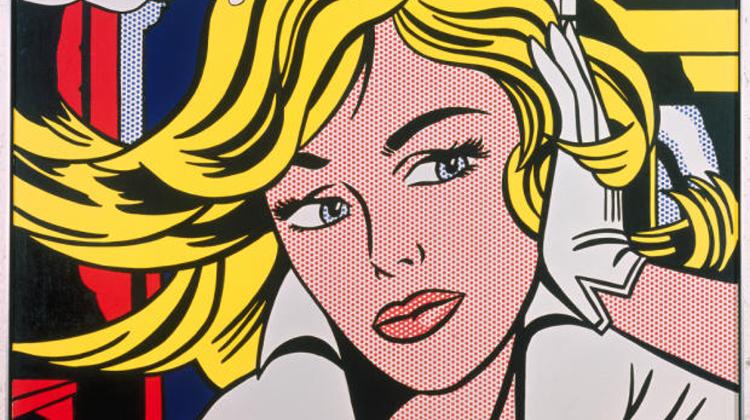 Until I came to this sensational exhibition at the Ludwig Museum I didn’t know I liked Pop Art. Basically I only knew Warhol’s Campbell Soup and Lichtenstein’s comic strips which are here as well, but I was unprepared for the arresting impact of this huge collection of art works whose artistic quality, it seems to me, outweighs what they call in marketing meetings here the “Vow Effect”.

I have been a fan of the Ludwig ever since I arrived in Budapest and like the museum itself I arrived 25 years ago. It used to be housed in the building to the left of the Royal Palace museum on the Var in a red marble colossus right out of a film by Fritz Lang. It has since found the perfect setting in the Palace of Arts with its soaring white walls flooded with sunlight.

I came on a Saturday morning and the place was full of attractive young couples with small children. This is because on Saturdays the Museum organizes a children’s programme where younger visitors draw kneeling on little round red mats or do creative things with tissue paper under the supervision of friendly and attentive young women.

This is to enable parents to wander around the art works undisturbed, which might be a good thing as some of the exhibits need a bit of explaining away.

Peter and Irene Ludwig owned a chocolate factory but they were both art historians and devoted much of their time to acquiring thousands of art works from all over the world and of every period from the Medieval to the Pre-Columbian to the Russian avant-garde. At the height of their careers they were acquiring a work of art a day.

They donated these works to museums all over Europe, helping to restock the Nazi-ravaged museums of Germany and persuading a reluctant Eastern Germany to exhibit decadent pop art in return for massive consignment of chocolate.

Between twenty and thirty museums in Europe bear their name.

But their main focus was Pop Art which they are credited with bringing to Europe for the first time. This is a splendid collection which includes a whole range of Pop Art from the one time Eastern Bloc which is why the subtitle to this exhibit is East Side Story.

I have never been disappointed by the exhibitions at the Ludwig and have gone away uplifted and rather less of a Philistine than when I went in. I particularly liked their retrospectives of photographers like Robert Capa and Martin Munkacsi.

However, on the top floor there is also the permanent collection which is well worth a visit and is included in the ticket price.

The Ludwig goes Pop exhibition will close at the end of the year.