Now On Until 31 December: The Lonely Cedar – Csontváry’s Genius, Budapest 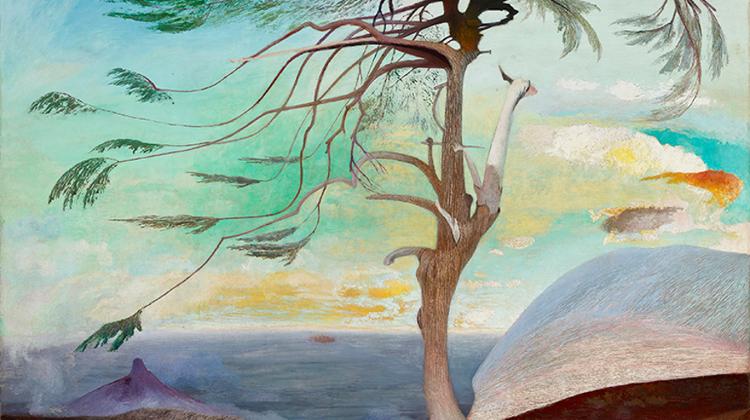 After several years’ preparation, a comprehensive retrospective show of the painter Tivadar Csontváry Kosztka opened in the former Army Headquarters building of the Buda Castle. <br><br>Tivadar Csontváry Kosztka (1853–1919) is one of the most influential figures of Hungarian fine arts. The exhibitions he meticulously organised by himself practically never elicited any critical response from his contemporaries. His works did not arouse any public interest or critical acclaim in his lifetime.

Yet, the first book-length study of his work was published as early as three years after his death, and the 1930 retrospective in Ernst Museum was a considerable success. In 1936 several new artworks of Csontváry were introduced to the Hungarian public, which showed a growing interest for the painter’s work.

In 1956 a large-scale exhibition was organised in Brussels, Fifty Years of Modern Art, where Csontváry’s painting Horse Ride by the Sea (Tengerparti sétalovaglás) was presented side by side with the works of Van Gogh and Gauguin.

His 1963 retrospective show in Székesfehérvár (which was later taken to Budapest) was a huge success. In 1973 the Csontváry Museum in Pécs was opened. After much preparation, a series of international exhibitions was organised in 1994; however, the highly anticipated foreign success still did not come about.

Most of Csontváry’s works are kept in public collections, such as the Hungarian National Gallery, the Janus Pannonius Museum at Pécs, the Herman Ottó Museum in Miskolc, the Damjanich János Museum in Szolnok, the National Gallery of Bratislava (Pozsony), the Museum of Lucenec (Losonc) and the Budapest History Museum. Several of his works can be found in private collections.

The exhibition venue is the former Army Headquarters in the Buda Castle. This is a symbolic building, erected in the late 19th century in order to embody Hungarian greatness.

This was also the time when Tivadar Kosztka decided that it would be the guiding principle of his life to extend this national greatness by his own efforts and show it to the world. However, the four-storey neo-Renaissance building with its splendid towers could not stand in all its glory for long.

It was hit by a bomb in the Second World War, after which it stood in ruins for several decades. It was only last summer, fifty years after the war’s ruins were cleared away from the streets of Budapest, that its gates opened again.

The exhibition is presented in seventeen halls. More than 1200 square meters of screen walls were built specifically for the show. As the different halls are closely tied together by the curatorial concept, the visitor’s journey through their spaces is one directional.

Apart from reading the printed information on the walls, one may also watch films at the exhibition. With the help of the director Mispál Attila, a series of feature film spots were created, representing decisive aspects of Csontváry’s life and work in a condensed, comprehensible way. The exhibition also features a documentary film consisting of seven interviews with artists, art historians and critics who studied Csontváry’s oeuvre.

The show also includes contemporary artworks. One of the key parts of the exhibition is a corridor of light, Erik Mátrai’s work, that leads the visitor from a group of early works to ones in which light plays a decisive role both as a principle of composition and as a motif.

Visitors are also helped by interactive devices. One can learn about Csontváry’s personal relationships or the significant geographical locations in his paintings on touch-screens. One information-wall includes a glossary as well, explaining the unusual terms and expressions in Csontváry’s oeuvre.

The show is made possible by an art rental agreement with the Hungarian National Gallery. As the majority of artworks kept at the Csontváry Museum in Pécs are the property of the Hungarian National Gallery, this single agreement regulates the use of most works, including the so-called great pictures, such large-scale works as Taormina, Baalbek and Mary’s Well (Mária kútja).

In this respect, the fundamental concept of the show is very simple: its aim is to present everything available. However, there are several works of doubtful authenticity – none of these were selected for the show. There is one more interesting detail about the works’ presentation: the title cards also indicate whether the piece presented was included in the shows organised by Csontváry himself, or were only found later.

The safe transportation of some artworks require exceptional attention. Having consulted a board of art restorers several times, the organizers decided that rolling up the big canvases would be too dangerous. Therefore, these were transported on their current frames, in a carrier box especially made for this purpose.

About one third of the known Csontváry oeuvre remains hidden. This is a very high percentage, especially when one takes into consideration that both the artist and Gedeon Gerlóczy, the person saving the artworks, were determined to keep the works at one place, preferably in public collections.

Some of these lost works were taken to the Soviet Union by the Red Army from the safes of the Hungarian National Bank as booty, but the majority of these works are probably kept in Hungarian private collections. There is a separate hall assigned for these pictures, where they – or rather, their absence – can be exhibited.

The show does not follow a chronological order; rather, it is made up of thematic units. The themes are connected with the characteristic motifs of Csontváry’s works: the relationship between the built environment and nature, the heritage of antique ruins, the unfolding of light, the events of the sky, the path of the sun, the transubstantiation of man.

The show is accompanied by a representative, album-like catalogue. Apart from the reproductions of the recently taken photographs of the pictures (made by György Darabos), the curatorial article, and the usual index of works, one can find the most comprehensive exhibition list and bibliography of studies on Csontváry’s works that has ever been published.

There is an independent museum educational programme made specifically for the show. Museum educator Gabriella György has also written and edited a guidebook for these programmes, which can be purchased at the show. Groups, individuals and families are all welcome to sign up for these events.

The international conference organised in December is an important part of the exhibition’s professional programme. The symposium will be open to the general public, and it will mostly feature invited speakers. However, there will be a section where anyone can apply with a résumé and a brief professional biography. The papers presented at the conference will be published in an edited volume.

The exhibition is open for the public in the usual museum opening hours: 10 to 18 each day, except Mondays. As the fire department limited the maximum number of visitors in the building to 200, entrance tickets are valid for specific time slots. Tickets are also available online. Prices and discounts are listed on the website.

The exhibition The Solitary Cedar – Csontváry’s Genius is under the patronage of the President of the Republic of Hungary. The show may be an unforgettable experience for all kinds of visitors, professionals, art-lovers and the educated general public as well.

The exhibition is organised by Várgondnokság Nonprofit Kft.