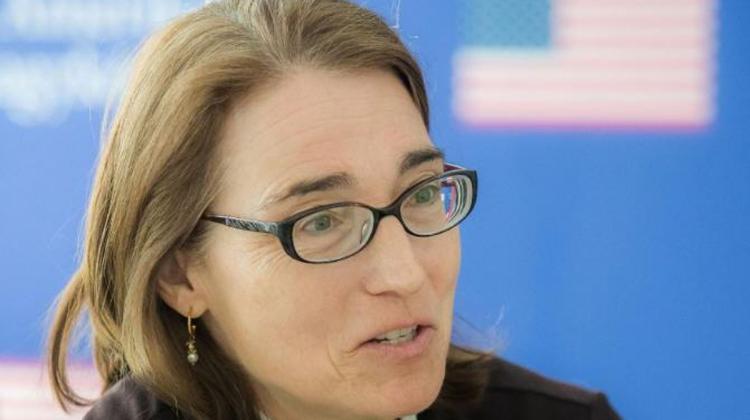 Sarah Sewall, U.S. undersecretary for civilian security, democracy, and human rights, paid a visit to Hungary at the end of May. As one of the Hungarian papers noted, she was the highest-ranking U.S. diplomat to visit Hungary since the summer of 2011, when Secretary of State Hillary Clinton made a quick trip to Hungary.

Before Sewall was appointed to this post in February 2014, she taught at the Kennedy School and at the Naval War College. She served as deputy assistant secretary in the Department of Defense during the Clinton administration. She is a graduate of Harvard College and as a Rhodes scholar got her Ph.D. at Oxford.

Sewall’s name should be familiar to those who follow U.S.-Hungarian relations because, for about a week at the end of 2014, Hungarian papers gave her extensive coverage. The reason was a speech she delivered at the Carnegie Endowment for International Peace.

In it she announced that the U.S. government had set aside $100 million to combat corruption in Central and East European countries because “corruption alienates and angers citizens, which can cause them to lose faith in the state, or, worse, fuel insurgencies and violent extremism.” Therefore, helping these countries fight corruption is in the interest of the United States. The Hungarian reaction to her speech was antagonistic. Viktor Orbán interpreted the U.S. “action plan” as a hostile act by which the United States had declared Hungary to be a “field of operation.”

Sewall’s visit to Hungary was a first for the undersecretary. She met with government officials, opposition leaders, journalists, and judges. She delivered a speech at the Magyar Újságírók Országos Szövetsége (MÚOSZ), which was described by the English-language government propaganda publication Hungary Today as thinly-veiled criticism of the Hungarian government. Magyar Idők sent a journalist to the event, but his summary of the speech was brief and greatly toned down.

Since the speech is available online, it is not necessary to summarize it at length, but here are a few snippets. Sewall emphasized that democracy must be defended “not only against threats from without, but also inevitable pressures from within.”

Or, “we have seen how demagogues can exploit difficult moments for political gain by playing to our worst human impulses and targeting the constitutional rights and institutions designed to limit the power of those impulses.” Or, “We all know that, at times, democratic majorities can stray from democratic values. By upholding individual rights, however, democracies protect the few from the abuse of the many, and empower them to challenge majority views that conflict with democratic values.”

Or, “as undemocratic forces seek to consolidate power and escape accountability, they often target independent media and other checks and balances.” Or, “They also use corruption to corrode the rule of law and buy off opponents. Or they push through significant changes to laws and the constitution with little or no consultation with citizens and opposition parties.” Surely, anyone who’s familiar with the situation in Hungary will recognize that Sewall was talking about the Orbán government throughout her speech.

Ádám Csillag, the man who without any compensation records all important events staged in defense of Hungarian democracy, also videotaped the speech.

Of course, I quoted only a handful of sentences from Sewall’s speech, but the undersecretary covered issues like free elections, free media, checks and balances, and the need for an independent judiciary. She fielded questions concerning the independence of the Constitutional Court and the electoral law, which cannot be a guarantee of fair elections. Her staff had prepared her well because she even knew that “a Hungarian television station reported that government officials had ‘instructed’ senior managers on which politicians to interview and which topics to cover.” She was talking about the head of HírTV.

We also know quite a bit about what transpired between László Trócsányi, minister of justice, and Sarah Sewall. Magyar Idők summarized the ministry’s side of the story, from which we learn that, in addition to Trócsányi, Gergely Prőhle was also present. Prőhle is one of those diplomats who was dismissed during the summer of 2014 when, during Tibor Navracsics’s brief tenure as foreign minister, the administration got rid of close to 200 diplomats from the ministry and replaced them with political loyalists.

Prőhle, as far as I know, for months didn’t know what his fate would be, but eventually Zoltán Balog, minister of human resources, created a post for him. He is now deputy undersecretary responsible for international and European Union affairs. What that means in a ministry dealing with education, healthcare, sports, and Roma affairs I wouldn’t know. It seems, however, that whenever the Orbán government wants to produce “a moderate face” for foreign consumption, they drag out Prőhle.

Even from Magyar Idők’s summary it is clear that Sewall brought up uncomfortable questions about the state of constitutional guarantees. Trócsányi assured her that all disputed questions had been settled during the second Orbán government and even Hungary’s “European partners” consider the case closed. The minister gave a lecture to Sewall on the new Hungarian constitution and the institutions that safeguard basic rights.

As for questions concerning the freedom of the media, Hungary settled all those issues with the European Council and the Council of Europe. The last sentence of the communiqué stated that “the two sides agreed that Hungarian-American relations are very extensive and they are solid foundations for further cooperation which both sides find important. There was also consensus about the necessity of a dialogue in the spirit of alliances.”

Sewall’s own report on the meeting wasn’t that upbeat. She described the meeting to Magyar Nemzet as “an honest and occasionally tough talk.” Both sides had an opportunity to explain their positions, but “there are many points where the Hungarian and the American positions differ.” After probing for specifics, Sewall brought up the legal changes introduced in the last few years. She also expressed her dismay over the conspiracy theories the Hungarian government concocts. She specifically objected to János Lázár’s accusation that President Barack Obama wants to flood Europe with Muslim immigrants.

I often comment on the inordinate number of articles that can appear on Hungarian-language internet sites in response to certain events. Literally hundreds in a day or two. On Sarah Sewall’s hard-hitting speech, however, I found only a handful. Few reporters showed up at her speech in the headquarters of the Hungarian Journalists’ Association. To my great surprise, HVG didn’t send anyone to cover the story. The short article they published was based on reports by Origo and Népszabadság. As for the parties, Fidesz reprinted the ministry of justice’s communiqué but MSZP didn’t consider Sewall’s visit important enough to mention.

The only party that issued a statement of its own was the Demokratikus Koalicíó (DK). Attila Ara-Kovács, head of DK’s foreign affairs cabinet, gave it a witty title: “The United States sent a message that Orbán would also understand.” It is a takeoff on the latest mega-poster of the government that encourages Hungarians to vote in the forthcoming referendum on “compulsory quotas.” The poster reads: “Let’s send a message to Brussels so they would understand.”

A footnote to this story. Right beside Ambassador Bell was an invited guest: János Martonyi, former foreign minister of Viktor Orbán. I would love to know why American diplomats feel compelled to invite him to all functions in which there is an American presence. Why do they think that he, unlike other members of present and past administrations of Viktor Orbán, is a perfect democrat?

All told, this man served under Viktor Orbán for eight years and served him loyally. I have never heard him express any misgivings about the direction in which Viktor Orbán was taking the country. He defended him at every turn. Yet, regardless of whether Republicans or Democrats run the United States there is János Martonyi, everybody’s favorite. If I just knew why.