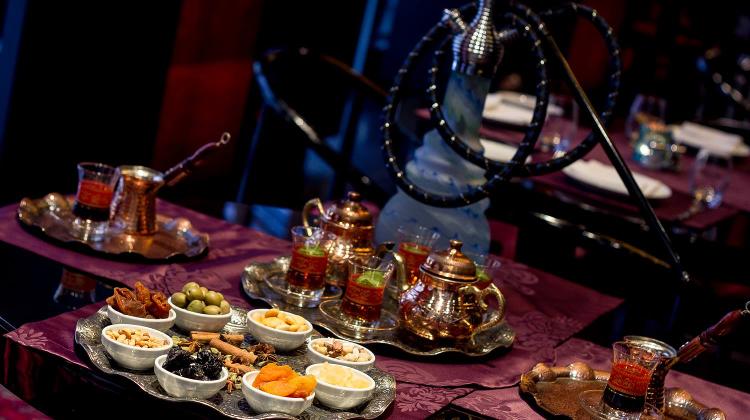 Baalbek, a traditional Lebanese restaurant opened at the Buddha-Bar Hotel Budapest Klotild Palace - the Mellow Mood Group’s first 5 star hotel. This new hip place of the oriental cuisine lovers - which got its name after a Lebanese city situated at a hilltop in Bekaa Valley - welcomes its guests in the heart of Budapest. Besides this connection, the other inspiration for the name came from the famous Hungarian painter, Tivadar Csontváry Kosztka’s monumental painting called Baalbek.

The restaurant that lines up the finest of the Levantine cuisine prepares all dishes halal, putting the emphasis on traditional recipes, fresh and premium ingredients and last but not least on exquisite serving.

The restaurant’s Executive Chef – whose passion is the authentic Arabic cuisine – is the guarantee that every guest of the restaurant will have the impression they are on a gastronomical journey to the Middle-East.

”With opening the restaurant our aim is to bring the Middle-East’s most exciting cuisine a bit closer to our guests. It really is exciting because our menu offers delicious dishes with a hint of Mediterranean and a touch of Turkish flavours, all of this served in a traditional atmosphere with matchless Arabic hospitality” – said Judit Blandl, general director of Mellow Mood Group.

”Besides that I truly believe that locals and tourists are equally open to such novelties. The Buddha-Bar restaurant has already become a favourite place for the Asian fusion food lovers, and an original Lebanese restaurant can only extend the Klotild Palace’s inimitable blend of flavours” – added Tamás Fazekas, general manager of Buddha-Bar Hotel Budapest.

Baalbek, with its cosy winter terrace, offering a wide range of premium shishas and traditional Arabic tea, will undoubtedly become a must try restaurant in Budapest.

The downtown located hotel features 102 first-class rooms including 27 suites, state-of-the-art conference facilities completed with high quality catering services, as well as the relaxing Buddhattitude Spa, which is a perfect place to smooth all senses. The unique Buddha-Bar Restaurant, Bar & Lounge is celebrated for its Asian-fusion cuisine and authentic Buddha-Bar DJ music.

Combining the modern Asian-colonial interior and a historical palace, the hotel has received the Best International Hotel Interior Award in 2013.

Why Baalbek?
The new hip place of the oriental cuisine lovers got its name after the Lebanese city situated at a hilltop in the Bekaa Valley. Considering the origin of the name Baalbek, in some interpretations it means God of the Town, and the city’s trademark is the monumental columns of an old temple, built in the times of the Roman conquest. These epic columns are reflected in our logo as well. When choosing the right name for the restaurant, the other major inspiration was the famous Hungarian painter, Tivadar Csontváry Kosztka’s monumental painting of the city, which is also known as the last painting of his expressionist era. The original painting is exhibited in Pécs at the Janus Pannonius Museum.