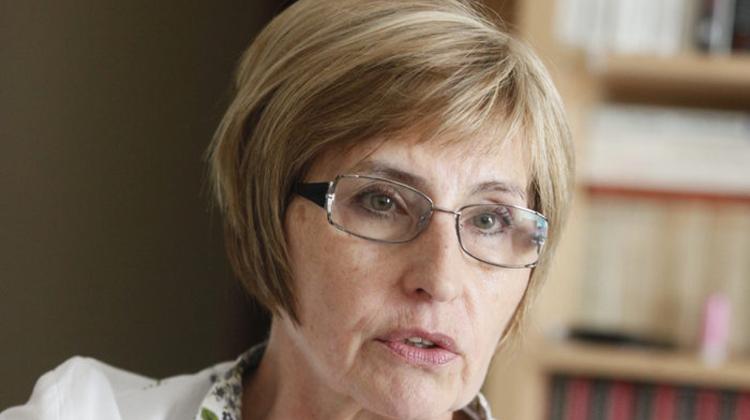 Translation of György Nej’s interview with Hungarian economist Mária Zita Petschnig published in 168 óra on 18 July 2014 under the title “National Tragedy: We may leave the EU.” President Áder János signed into law the agreement pertaining to the the Paks II loan agreement, although the Hungarian Wire Office (MTI) neglected to report it. Was it really so unimportant? The project, together with interest and equity, could amount to 7 trillion fortints (USD 2.5 billion). Economist Mária Zita Petschnig says it will be repaying this loan until 2047.

– The whole thing is like under socialism when some decided on the country’s matters and parliament put its stamp on it and we acknowledge it.

– The decision making mechanism was precisely the same as during the period of great crisis (Depression, WWII-transl.). Mihály Varga already indicated in March that parliament may not change the terms of the loan agreement. Parliament was not able to learn the opinion of the Budgetary Council, not to mention expert information. We learned of the agreement (in January 2014) from the Russian media which was signed in March by undersecretary Gábor Orbán.

– But it is still not apparent from these why Paks II is being built and at what cost. There are to theoretical declarations and nothing more.

– The contracts were concluded based on the preparations made by a group of experts. 40 people are working in the secretariat of government commissioner Attila Aszódi. Members of Hungarian government didn’t even know about the preparations. Only János Lázár, Gábor Orbán, Mihály Varga and Péter Szijjártó formed the secret negotiating team. The Atomic Energy Authority and experts in the field were left out. MVM (Hungarian Electric Company) and the National Development Ministry were only technical consultants. Two foreign advisory offices played a rule in the matter: the Bavarian Rothschild Bank and another German company.

– The Constitutional court rejected the (joint) referendum initiative of (opposition parties) Együtt and PM (Dialogue for Hungary) on the grounds that and international contract cannot be the subject of a referendum. But isn’t this a private contract? A minister and the head of a (state-owned) company signed the contract.

– An intellectual argument is taking place over this. In any event, last summer János Martonyi still spoke about issuing an international tender to renovate the atomic energy plant. Bernadett Szél has been asking for the preparatory materials for months. First they said they had been classified for ten years. Then it turned out over the course of a lawsuit that studies weren’t even prepared. (Minister for National Development) Miklós Seszták declared that preparatory work existed, but experts say that what has been released was prepared for an earlier concept.

– The Hungarian government and the government of the Russian Federation appear in the final version of the agreement submitted to parliament. Without signatures! Was the reason for this that we could back out of the whole thing?

– That cost of that would be enormous because if the work has already started terminating the agreement would trigger the loan being called in. Moreover, we would be left with the unfinished work completed o date.

– We’re getting a EUR 10 billion loan to build two new reactors and we only have to invest equity of 20 percent. Árpád Kovács, the president of the Budgetary Council called the debt payment obligations manageable and easy to fulfill. He believes the economy will grow and by the time we have to start repaying the debt in 2016 the state debt will have decreased to the point where the debt repayment is acceptible. Your previously declared that the Hungarian economy will never be able to repay this debt. Are you not mistaken?

– I don’t think so. Minimally the Hungarian economy must grow 5-6 percent in the following years, which is out of the question at the moment. If it were to increase by this much, then it would only be possible to spend money on Paks and nothing else. Furthermore, the 2o percent equity also encumbers the budget, so the debt grows from year to year. And how much with the related projects cost? Regulating the course of the Danube, a new wier, the containers, the expansion of the electrical network, the closure of other power plants, the transportation and storage of the fuel rods. I estimate that we are spending between 1.5 trillion and 3 trillion. Altogether we are talking about some 9 trillion forints, which is one third of GDP! The costs, the debt service, the interest, and the operating costs will burden the national budget for decades before being paid off by 2037. And in the case of building atomic power plants, they can never keep to the planned budget. This risk burdens everyone. This is a national tragedy.

– You suggest that if the Constitutional Court takes into account the Fundamental Law ’s passage forbidding any increase to the state debt, then the contracts are null and void, and we avoid the expansion.

– Experts claim that the energy generated this way will be expensive, and that the surplus will be unsellable. Furthemore, the existing reactors may continue operating until 2032. Surveys indicate that the majority of Hungarians are opposed to the expansion. The news is even bigger and more difficult to digest than the Bős-Nagymaros (hydroelectric damn project on Danube-transl.) And still they swallow it. Why?

– Not everyone. Some politicians and NGOs are developing enormous energy to exposing he project both at home and in Brussels. The government has cleverly diverted society’s attention with the Szabadság square memorial. People see more problems in the HUF 240 million Simon scandal than the communicated 3 billion Paks one.

– If nothing else, the secrecy, the concealment of documents and contradictory declarations, the lack of parliamentary debate clearly shows that something really stinks. Who bought who? Is it something like the Gripen matter?

– You said it. There was a national strategic, geopolitical issue of “we don’t conclude bad deals”, which was a condition of the mandatory household utility cost reductions. But nobody has seen any calculations or studies. The whole thing is being urged by the Russians for domestic political reasons. Putyin sensed the Ukrainian crisis could escalate and he needed a member of the European Union to ally with, a European little sister as they refer to us in the Russian press. The demand for energy is decreasing in Europe. The Russian economy is in decline which Putyin is trying to offset by building an empire. Rosatom needed a market and business. After Fukusima it did not have any contracts.

– Putyin dressed it up with a EUR 10 billion loan. And Orbán? They say that he will distribute this to his own. But this is not a revolving line of credit, but rather fixed like concrete.

– He can still hand it out. No one has yet to figure out what the interest of Hungary is in all of this. I can’t either.

– Is it not in the interest of Hungary and most specifically the government to begin its next four years in office with a new capital injection? It already made 3 trillion forints confiscated from the retirement funds disappear!

– There was a financial dimension to Paks II. At the end of 2011 the ground was burning and we had to reinvite the IMF. But it turned out that we cannot get an unconditional loan. The give and take lasted a year and a half. Meanwhile, Töröcskei was sent East to get money from the Russians, the Arabs, the Chinese, and the Indians. Putyin also comes to mind from whom we asked EUR 5 billion even though he offered ten billion during the summer of 2013 together with Paks. But only after signing the first agreemen did the Russian ministry of finance start looking for he money. For a while, Orbán though the loan could be freely used and the equity only had to be paid at the end. However, that is no what the contract provides for. The information I’m collecting indicates that they misled Orbán.

– As well as the country! On January 13th the government spokesman said Viktor Orbán was in Moscow to discuss the economic results of the past four years. The next day the president of Rosatom and Mrs. László Némth signed the first agreement just after it arrived to Brussels for approval of is peaceful energy use. That’s how important it was. Putyin’s domestic political reputation improved signfiicantly.

– At what interest rate are we receiving the euro?

– I haven’t read anything about it, but I guess the market rate, which carries with it the double risk of inflation against the Rubel and the Forint as well.

– You said recently that this road would lead us out of the European Union.

– If we do not fulfill the Maastrict criteria and the state debt and deficit numbers, and Paks II will make this impossible, we can only avoid consequences if we leave the European Union.