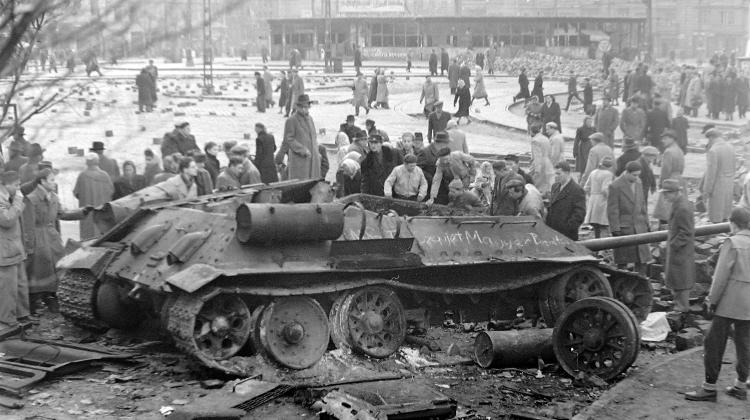 One month from now, sixty years ago on 4 November 1956, a large Soviet force invaded Budapest and other regions of the country. The Hungarian resistance continued until 10 November, during which time 2,500 Hungarians and 700 Soviet troops were killed in the conflict. Below are key insights into what happened on 4 November 1956, over the next few days, and then afterwards as 200,000 Hungarians fled as refugees, with mass arrests and denunciations continuing for months thereafter.

At 03:00 on 4 November, Soviet tanks penetrated Budapest along the Pest side of the Danube in two thrusts: one up the Soroksári road from the south and the other down the Váci road from the north.

Thus before a single shot was fired, the Soviets had effectively split the city in half, controlled all bridgeheads, and were shielded to the rear by the wide Danube river. Armoured units crossed into Buda and at 04:25 fired the first shots at the army barracks on Budaörsi Road.

Soon after, Soviet artillery and tank fire was heard in all districts of Budapest. Operation Whirlwind combined air strikes, artillery, and the co-ordinated tank-infantry action of 17 divisions.

At 05:20 on 4 November, PM Imre Nagy broadcast his final plea to the nation and the world, announcing that Soviet Forces were attacking Budapest and that the Government remained at its post.

By 08:00 organised defence of the city evaporated after the radio station was seized, and many defenders fell back to fortified positions. During the same hour, the parliamentary guard laid down their arms. Free Kossuth Rádió, stopped broadcasting at 08:07.

Between 4 and 9 November, the Hungarian Army put up sporadic and disorganised resistance, with Marshal Zhukov reporting the disarming of twelve divisions, two armoured regiments, and the entire Hungarian Air Force.

The Hungarian Army continued its most formidable resistance in various districts of Budapest and in and around the city of Pécs in the Mecsek Mountains, and in the industrial centre of Dunaújváros (then called Stalintown).

Fighting in Budapest consisted of between ten and fifteen thousand resistance fighters, with the heaviest fighting occurring in the working-class stronghold of Csepel on the Danube River.

Hungarian civilians bore the brunt of the fighting, as Soviet troops spared little effort to differentiate military from civilian targets. For this reason, Soviet tanks often crept along main roads firing indiscriminately into buildings. Hungarian resistance was strongest in the industrial areas of Budapest, which were heavily targeted by Soviet artillery and air strikes.

The longest holdouts against the Soviet assault occurred in Csepel and in Dunaújváros, where fighting lasted until 11 November before the insurgents finally succumbed to the Soviets. At the end of the fighting, Hungarian casualties were around 2,500 dead with 20,000 wounded.

Budapest bore the brunt of the bloodshed, with 1,569 civilians killed. Approximately 53 percent of the dead were workers, and about half of all the casualties were people younger than thirty.

On the Soviet side, 699 men were killed, 1,450 men were wounded, and 51 men were missing in action. Estimates place around 80 percent of all casualties occurring in fighting with the insurgents in the eighth and ninth districts of Budapest.

Although some very senior officers were openly pro-Soviet, the rank and file soldiers were overwhelmingly loyal to the revolution and either fought against the invasion or deserted. The United Nations reported that there were no recorded incidents of Hungarian Army units fighting on the side of the Soviets.

By January 1957, the new Soviet-installed government had suppressed all public opposition. These Soviet actions, while strengthening control over the Eastern Bloc, alienated many Western Marxists, leading to splits and/or considerable losses of membership for Communist Parties in the West.

Public discussion about this revolution was suppressed in Hungary for more than 30 years. Since the thaw of the 1980s, it has been a subject of intense study and debate. At the inauguration of the Third Hungarian Republic in 1989, 23 October was declared a national holiday.