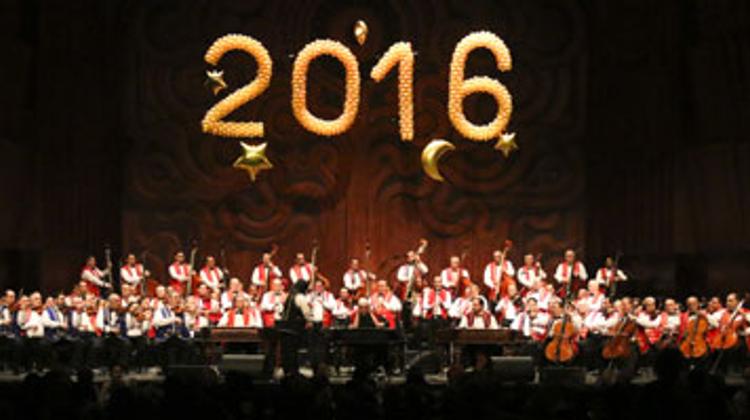 It has become a tradition for The 100 Gypsy Violins to give a gala concert on December the 30th. The audience will get the chance to hear the pieces of Liszt, Brahms, Strauss and Khachaturian in the interpretation of outstanding musicians.

The worldwide unique 100 Gypsy Violons was founded in 1985. Those establishing the Orchestra aimed to unite the best of the famous musician dynasties and to ensure a place and workshop for them, their offspring and other talented young musicians.

Saving the traditions of Gipsy and Hungarian folk music, the survival of classical folk music through performing it within the repertoire are among the main goals of the Orchestra. These outstanding musicians and first violins, thanks to their high qualification and the everlasting beauty of Gipsy music.

Next to the repertoire of Gipsy and Hungarian music, they offer popular pieces of the notables of international classical music as well.

The formation of the Hungarian Heritage Prize winner 100 Member Gipsy Orchestra thirty years ago was inspired by a tragic event.

All of the country’s Gipsy musicians gathered for the funeral of the outstanding “primas king” (gipsy soloist) Sándor Járóka Sr., and played on the ceremony. The idea of a grand concert orchestra, to fill the remaining artistic and intellectual gap, was born.

The Orchestra debuted within the Budapest Spring Festival on March 22, 1986 at the same place of today’s concert, the Patria hall of the Budapest Congress Center.

The premiere was recognized by both the Hungarian and international professional audience. The 100 Member Gipsy Orchestra began its way to world fame becoming the gift of the Gods for the people. From 2016 they named as The 100 Gypsy Violins.