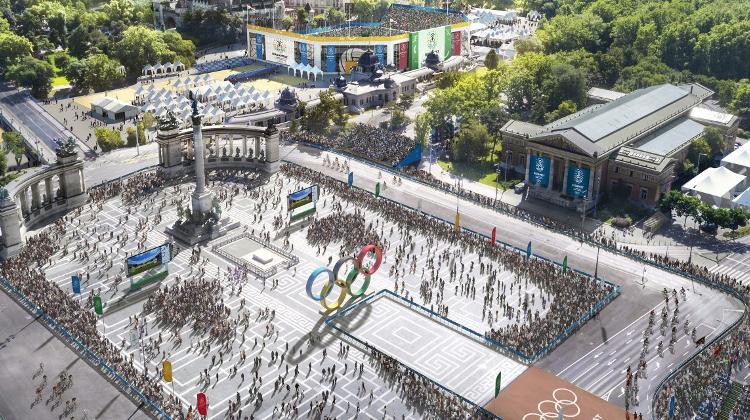 The proposal sponsored by Mayor István Tarlós and deputy Mayor Balázs Szeneczey includes converting temporarily the Kincsem Equestrian Park into a pentathlon complex and organising the mountain bike events at Testverhegy hills instead of the originally planned site of Hármashatárhegy.

The proposal was passed with 21 votes in favour, four against and four abstentions.

The assembly rejected a motion submitted by LMP representative Antal Csárdi on initiating the withdrawal of Budapest’s Olympic bid.

Csaba Horváth told a news conference before a meeting of the assembly that smog caused the deaths of several thousand people each year and Tarlos had not considered a proposal among others to make public transport free of charge during periods of heavy smog. He also noted that “two weeks after one day of snowfall”, many roads and pavements were still in a dangerous state because they had not been cleared of ice.

Whereas in 2010, 130 vehicles were deployed to clear snow, only 75 have been put into action this year, he added.

On the topic of Budapest’s bid to host the 2024 Olympics, Horváth said “a small, power elite” are deciding arrangements for the Games, flying in the face of democratic principles, and the possible impacts and risks associated with hosting the event have not been presented to the public.

“We are not against the Olympics; we are against corruption and in favour of a referendum,” he said. On the subject of the recent findings of Europe’s anti-fraud office OLAF into the circumstances surrounding construction of Budapest’s fourth metro line, Horvath said until the report is published, no one can know whether allegations made by the government are founded or not.

He said the Socialists demand immediate publication of the OLAF report.

This would hand Budapest residents a “positive motivation” to choose public transport, a scheme that has proven successful in several cities in other countries, he said.

Jobbik will call on the Budapest assembly to ask Budapest Mayor István Tarlós to start talks with the national government on making travel by train and distant bus services free of charge within the capital’s administrative districts.

Commenting on Budapest’s Olympic bid, Tokody said Jobbik upheld its “yes in principle” to supporting it. But he argued that a national referendum would have made sense before submitting the application. He said Jobbik will stop backing the bid if the proportion of Hungarians supporting it in a survey to be carried out by the Hungarian Olympic Committee is lower than 60-70 percent.

LMP Opposition LMP representative Antal Csárdi said LMP supported making public transport free of charge during periods of smog and he called current regulations such as banning cars with certain number plates “uncontrollable and unviable”. Commenting on the Budapest Olympics, he told a press conference that LMP had been the first to reject the bid, arguing against the excessive costs

The budget earmarked for the 2024 Games would be better spent on education and health care, she told a press conference. In connection with the OLAF report, she said DK it made no sense for the government not to release the document “unless it contains details detrimental to the government”.