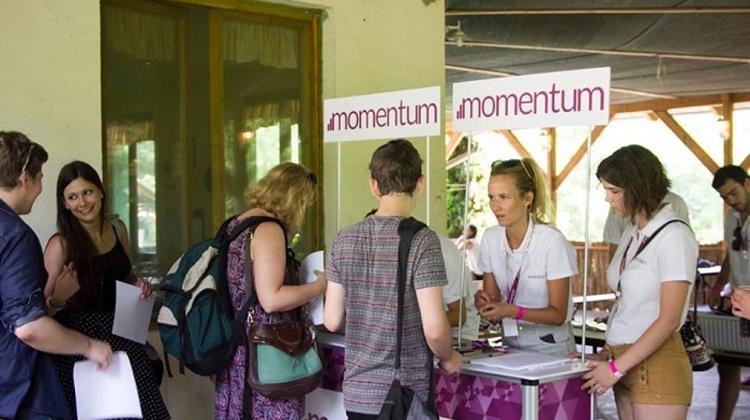 “No to the Olympics, yes to our future!” - A political youth organization suddenly appeared in Hungarian headlines last week with a plan to derail government ambitions to host the 2024 Summer Olympic Games in Budapest. The Momentum Mozgalom (Momentum Movement) kicked off a media campaign called “NOlympics” to gain support for its opposition to hosting the games, and on Thursday will begin gathering the 138,000 signatures required to initiate a citywide referendum on the matter.

But the group doesn’t plan to stop there: according to its own admissions, it plans to form a political party with the intention of unseating Fidesz in 2018 elections.

The Momentum Movement, which “brings young people together from the new political generation that want to do something to solve Hungary’s systemic problems,” was formed in 2015 and officially became an association last year. According to its website, it offers “not ideology but solutions. The age of ideological battles is over, it’s the 21st century already. The left must accept national consciousness, and the right must learn solidarity.”

Momentum made a name for itself only last week when the Budapest Elections Commission verified a referendum question the group’s president submitted in December.

“Do you agree that the Budapest City Government should withdraw its application for hosting the 2024 Summer Olympic and Paralympic games?” the question reads. The Curia, Hungary’s highest court, approved the legality of the question, and from Thursday the Momentum Movement will have 30 days to collect the 138,000 signatures of Budapest residents required to hold a local referendum. Several hundred volunteers have responded to the group’s appeal for assistance in collecting signatures, which they plan to do in 25 transportation hubs around Budapest and door to door.

“This is a very important question, it involves a whole lot of money and we think that in such a far-reaching question it is important to ask people’s opinion on whether they would really like for Budapest to organize the Olympics in 2024,” said Momentum co-chair Anna Orosz. “This can’t wait any longer, time is passing and money is pouring into this project already.” The group’s leaders say hosting the Olympics in Hungary would be “complete nonsense” as long as economic and social problems plaguing the country have gone unresolved.

Estimates of the real cost of hosting the Olympics vary widely, but according to a feasibility study, some HUF 774 billion (USD 2.69 billion) would go into the games, not including many infrastructural improvements that would have to be undertaken in the years preceding the event. Including those costs, economists predict that the total amount could be up to three times that much or more, in which case the event could cost the country somewhere around 6.5 percent of its annual GDP.

“This would not be the people’s Olympics but rather Fidesz’s,” Orosz said. “We like the Olympics, we don’t want to go against them. But the Olympics should be organized in the kind of country which can point to a decade’s worth of success stories, and not when there are burning questions in the country in the health system or in education, for example, for which solutions must be found. All the money which we are sinking into the Olympics doesn’t go toward us creating 21st-century education, or toward them resolving the problems of the health system, and so on,” she told investigative journalism site atlatszo.hu.

The government has already invested substantial amounts of money in the Olympics through conducting feasibility studies, promotional campaigns, and paying expensive application fees. While the government hopes the games would bring recognition and prestige to Hungary, it seems almost certain that the country would suffer economically: the last profitable Olympics were in 1984 in Los Angeles, and that might have been a historical anomaly (the games were boycotted by the Soviet Union).

Last year’s games in Rio de Janeiro were expected to lose at least USD 4.6 billion after Brazil invested a total of some USD 12 billion. Concerns over corruption also threaten to taint the Budapest games: it was recently revealed that the government secretly spent HUF 16.55 billion (USD 57.3 million) on a property it plans to use for an Olympic stadium, and other sites and development deals have already been awarded to oligarchs close to the government.

The five rings of decay

Momentum was formed in the spring of 2015 by its president András Fekete-Győr Jr. and 8 other activists, with the intention of eventually dethroning the Fidesz regime and becoming a serious actor in Hungarian politics.

From the beginning, the group acknowledged its goal to become a registered political party, and to participate as such in the 2018 national elections, but according to organizers, it consciously avoided publicity until now, opting instead to focus on building its base.

It is composed of several hundred official members, many of whom are university students, teachers, environmental scientists, lawyers and entrepreneurs, and in addition to membership in Hungary, it has members in London, Paris, Berlin and Brussels.

“If you ask us, ‘What is Momentum?’, we could say that it is a new political force which looks to the future, and its members are tied together by their common feeling of responsibility and opposition to the system, because we were not organized on an ideological basis,” Fekete-Győr Jr. told Magyar Narancs.

“In most of us, the flame of political and social engagement was awoken, and we began to seek each other out, seek out those people who believed that civil initiatives cannot succeed in Hungary today and can’t change the whole system, and that a political movement is necessary.”

He said it is not merely a university movement, and that while George Soros of the Open Society Foundation is not behind their activities, they would accept assistance from any left-wing party, or from far-right Jobbik, or even from disaffected Fidesz voters if they were able to provide valid petition signatures.

The group decided to jump into the political spotlight with the Olympics issue because they say it is symbolic of many of the problems in Hungarian politics, and draws attention to serious issues facing the country: the group has taken the five Olympic rings as symbols of five issues they say should be invested in before considering hosting the games.

The healthcare system, education, housing, standard of living and transportation should all be addressed first, they insist.

Momentum says they would accept the result if people voted to remain in the running for hosting the games, but they believe the people must be asked their opinion in a democracy. When asked why they decided to hold a local referendum rather than a nationwide one, the group said that previous attempts to do just such a thing had been rejected by the National Elections Office (NVI), and they didn’t want to make the same mistake. They referred to a local referendum held in Hamburg about hosting the Olympics, in which city residents voted in a very close result to withdraw their application.

Indeed, three previous attempts to initiate a referendum on the Budapest bid have been rejected by either the NVI or the Curia, and the government has ignored polls showing that half of Hungarians oppose the plan to host the games. 75 percent of Hungarians think that the Olympics would cost way too much money, and 64 percent of those surveyed believe that Hungary is too poor to be a host country. Six out of ten believe that nobody but businessmen loyal to Fidesz would benefit from the money pouring into the country.

Momentum leaders say they are optimistic: they are preparing promotional materials, campaigning in the streets and door to door, and have made it possible to download the signature sheet on the internet. If they manage to gather the required signatures, they expect a referendum to take place before the International Olympic Committee announces its decision in Peru in September. They’ve got a separate campaign team, and a legal department, if they need it.

“We know that there will be brakes in the system, and unfortunately not the kind that [political philosopher] Montesquieu dreamed of,” said Momentum member Miklós Hajnal. “But I think we’re ready for anything.”

Paris and Los Angeles are vying with Budapest for the 2024 games. Rome has joined Hamburg in withdrawing its bid.