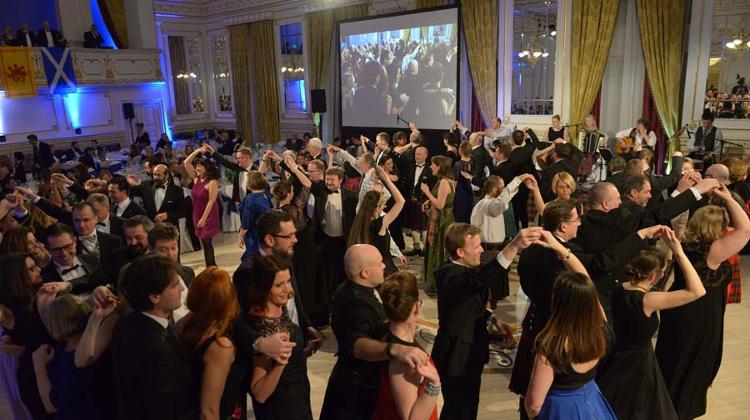 It’s that time of year: freezing temperatures, expats in tartan and many men in kilts drinking whisky, bagpipers and the customary haggis. Yep, it’s the big Burns Supper in Budapest, which has raised Euro 1m for charity over the years, held again with much success last Saturday at the fabulous Corinthia.

As always we were treated to some wonderful Scottish food and drink, followed by group dancing courtesy of the Budapest Scottish Country Dance Group, plus impressive Transylvanian folk-dancing added a special Hungarian element to proceedings.

I’ve been to many Burns events and Budapest's 'big one' really does take some beating. The magic formula is lots and lots of hard work by Douglas Arnott and his team, plus a 5* venue and lots of generous guests, with millions of forints raised for good causes as a result.

Overall HUF 8 million was raised this time, which will be donated to the 2nd Deptartment of Paediatrics in Tűzoltó utca, the Péterfy Children’s Hospital, a children’s nursery in Zabar, Nógrad county, and the Miskolc hospital, with further projects to be announced by Robert Burns International Foundation.

Special thanks from the organisers go to the British Ambassador, WhiskyNet, Arran Distillery, CocaCola, Cushman & Wakefield, Dreher, Mercedes-Benz, Takler Winery, Zwack and Kékkúti Ásványvíz, not to forget all those who contributed to the raffle and the auction including XpatLoop.com

Each year this annual event gets booked up well in advance, with the attendance this year pushing three hundred and fifteen people, who, I truly believe, all had a great time, and will just about have recovered in time for the next one in 2018!