Xpats Stir Up A Soup To Help Homeless 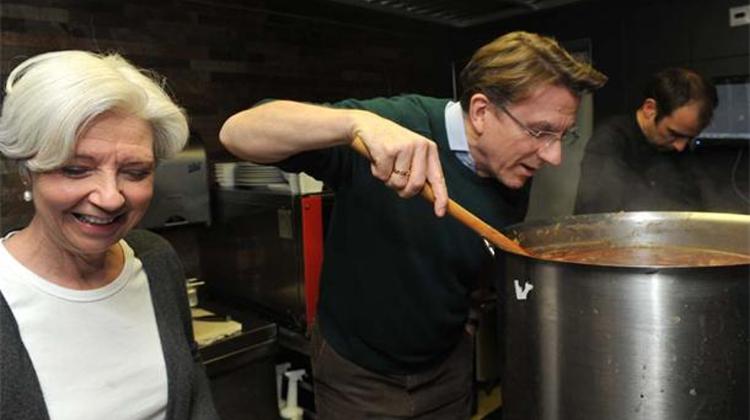 Hungarians make jokes about Scots being a bit thrifty, but the team at The Caledonia might make them reconsider... With temperatures plummeting to nearly -20°C, local staff and expat customers of this Scottish pub have been donating ingredients and time to make hundreds of litres of soup for the homeless in Budapest.

Throughout the day customers donate ingredients and spend a few hours chopping and peeling, while The Caley chef gets the burners fired up and the soup ready. 'The Age of Hope' charity volunteers then distribute the hot soup to homeless Hungarians every evening.

The Caledonia is one of the city’s popular watering holes with expats, and has a tradition of charity work. Co-owners Patrick McMenamin from Edinburgh and local Zsuzsanna Bozó (pictured below) both previously worked in Scotland for the youth charity Young Scot, before embarking on their first business venture here 10 years ago.

"We've always wanted to look at ways to give something back to the community that we are part of," explained Patrick. "We are very fortunate that our customers are keen and willing to support our efforts." (As readers in the loop know, we refere to expats and cosmopolitan locals as Xpats, hence the title of this article - Ed)

Falkirk-born Iain Lindsay OBE, the British Ambassador to Hungary, was on cooking duty this week with his wife Bridget (top picture) to help prepare a hearty lentil and sausage soup for the hungry homeless.

"It's great to see the expat community coming together with our Hungarian friends to provide urgent support to those less fortunate than ourselves." said Ambassador Lindsay. "Credit to The Caledonia for stepping up to the mark, and for the likes of Tesco and many of the patrons of the pub for helping out,” he added.

Scots in Hungary have a long and proud tradition of helping their Hungarian friends. With Burns Night approaching The Robert Burns Foundation in Budapest will host its 20th Annual Supper, having raised over €1 million for children's hospitals in Hungary to date.

So maybe the next Hungarian quip about the Scots should include, "Have you heard the one about the Scottish Pub in Budapest that made hundreds of litres of soup for the homeless in Hungary..."

"There have been several expats who personally donated money, food and most importantly their time to it and did a lot of work towards keeping this thing going. There has been a real community effort on this and there is quite a network of organisation.

The Caledonia are so marvelous to spend their time, shopping, collection, cooking and getting people to have some input in this. The guys who work for the charity that distributes to the homeless are out until 3am in the morning in the cold giving out food and persuading homeless people to take refuge in the hostels.

It costs just 45,000 HUF to feed 300 people so if anyone wants to donate any cash or even a bag of potatoes get over to the Caledonia so they can keep this thing going until the cold weather has gone away, " adds expat Chris Clarke.

The Caley is still taking donations of fresh vegetables and meat, if you’d like to help out you can get in touch via caledonia.hu.