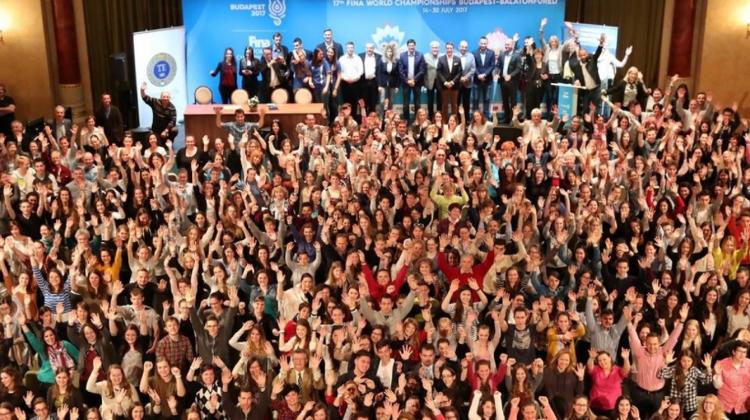 The first training session for volunteers at the 17th FINA World Championships and the following 17th Masters World Championships kicked off on April 23, 2017. More than 8000 people have joined the volunteer programme by BP2017 so far, after the selection process about 3500 volunteers will assist the organisers of the WCH and participating athletes.

The greatest sporting event of all times in Hungary will take place between 14 and 30 July, 2017 in Budapest and Balatonfüred. Millions will follow the FINA World Championships and the following Masters WCH worldwide.

The 800 volunteers taking part in the first session were welcomed by dr. Tünde Szabó, Minister of State for Sport, who said, „It has always been clear for us that we are able to unite and face challenges but this time we have the opportunity to prove that nothing is impossible for us and to show what our nation was meant for” – she added that April 23 marked the first day of the preparation programme for volunteers, who wish to be part of this wonder and are eager to pursue active roles in this global event through their assistance and effort.

Tamás Gyárfás, Vice President of the International Swimming Federation said briefly that now he really feels that the WCH are approaching. Lajos Mocsai, Dean of the University of Physical Education (TF), responsible for the organisation and training of volunteers pointed out that -professionalism rather than perfectionism shall be sought.

The Dean has emphasized and asked volunteers to understand that they are the real managers in their own areas. Finally, he wished that in the future they would think back to this period as one of the most remarkable and unforgettable experiences in their lives.

Éva Szántó, Executive Director at Bp2017 Nonprofit Ltd. informed in her presentation that seven thousand accredited participants are expected to the WCH between 14 and 30 July, 2017 whereas the number of athletes expected to the Masters WCH between 7 and 20 August, 2017 is around 12-14 thousand. Highly coordinated work by volunteers is a prerequisite for organising the WCH efficiently.

Thanks to the recruitment (started last July) and to effective publicity more than 8000 people have registered already, coming from all over the world. About 3500 volunteers will assist organisers and athletes during the WCH. The planning and delivery of volunteer programme by BP2017 is conforming to the methodology of international global tournaments.

The online registration platform for volunteers of the BP2017 Volunteer Programme has been available since June, 2016, volunteers joining the programme may choose from 30 areas and 6 disciplines. The training for volunteers consists of a whole-day General Training and Specialised Trainings.

The training is obligatory for all volunteers. During the General Training volunteers learn about national and international federations, associations related to the FINA WCH, disciplines and venues, the guests and target groups of the WCH, the conduct of the event, international protocol, cultural differences and conflict management.

Organisers have received a lot of positive feedback from the participants of the first training session. Ágota Dorottya Demeter travelled straight from Brussels to the event: „It was a truly elevating and inspiring experience for me.

I believe that those who had any doubts before the training are now convinced that it was worth taking the plunge and start this adventure, as we will become part of something remarkable. Presentations have demonstrated that this team can accomplish the impossible, we can organise and conduct such a great event in half of the usual time.”

The second and third training sessions will take place on 29 and 30 April, 2017 in Budapest Kongresszusi Központ. The 17th FINA World Championships taking place in Budapest and Balatonfüred between 14 and 30 July, 2017 are one of the most complex sporting event in the world.

Athletes of six discipline will compete in five venues while the WCH operations must at all times be smooth and fluent. In addition to sporting venues, volunteers will have to assist at the airport, in hotels, training venues, conference and media centres.