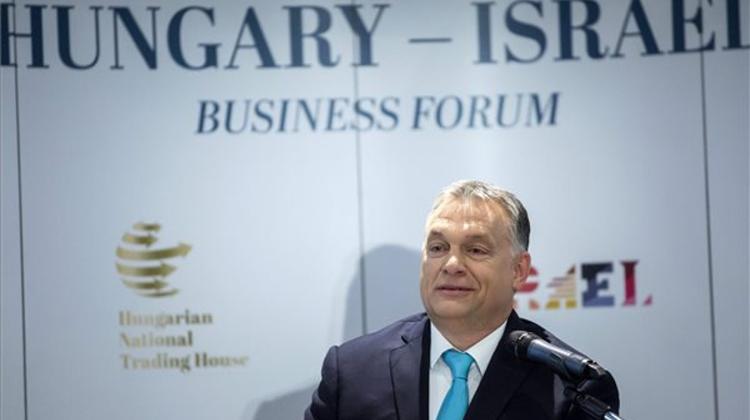 All political obstacles to Hungarian - Israeli economic cooperation have been cleared, Prime Minister Viktor Orbán said at a Hungarian- Israeli business forum that was also attended by Benjamin Netanyahu, his Israeli counterpart. In his closing remarks to the forum Orbán said Hungary’s Eximbank had opened a 600 million dollar credit line to support partnerships between Hungarian and Israeli companies.

He said Israel is Hungary’s third largest investor, noting that Israeli investments in Hungary totalled 11 billion dollars at the end of 2014, making up 12% of foreign investments in the country. He said there are 172 Israeli companies present in Hungary employing 4,570 people. Bilateral trade turnover was 525 million dollars in 2016, up by 12% from 2010, he said.

Orbán said the global economy had entered a new era in which success depends on countries’ ability to incorporate technology into their economy. He said this was the most important area of Hungarian-Israeli economic cooperation, arguing that the Israeli economy is “excellent” at making use of technology while Hungary “has a long way to go”.

Netanyahu assured the forum of the two governments’ support for business activities between Israeli and Hungarian companies. He said Israel and Hungary could learn from each other and offered that Israel would host IT fellows from the V4 countries so that they can master the most advanced cyber technologies in Israel.

More than one hundred Hungarian and Israeli businesses took part in the forum organised by the Hungarian National Trading House.