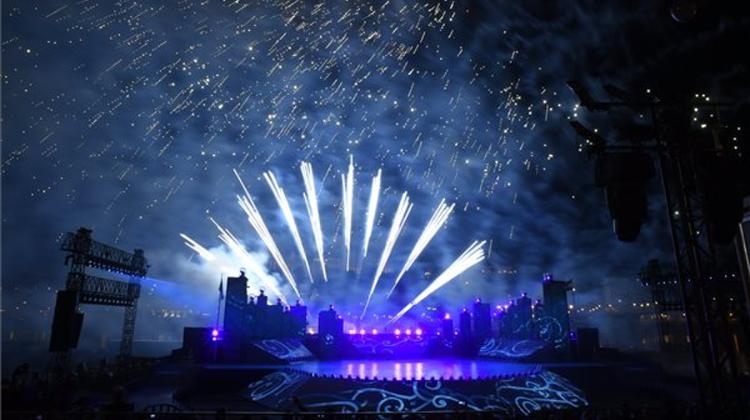 The event began with a choral work by Kossuth Award winning world famous Hungarian composer Péter Eötvös called Sound of the Danube, which he wrote at the age of 12, with new lyrics written especially for the World Championships by poet Dániel Varró.

The work was performed by the Cantemus children’s choir on the huge stage set up on the Pest bank of the Danube at the foot of Chain Bridge.

The performance was followed by a presentation on the link between water and culture in Hungarian history. The “journey in time” began in the Roman city of Aquincum and continued with important episodes from the time of the Hungarian conquest of the Carpathian Basin, renaissance Buda, King Matthias and the era of the hussars.

Next came an excerpt from the opera Háry János by Zoltán Kodály with the involvement of 160 dancers, after which the opening ceremony remembered Franz Liszt, whose favourite places to compose music included the bank of the Danube.

Sports came to the forefront following the cultural-historical block, beginning with an homage to the first Hungarian winner of an Olympic gold medal, swimming legend Alfréd Hajós, after which the National Anthem was played in honour of Hungary’s most successful aquatic athletes.

Next came an introduction to the Budapest World Aquatics Championships’ venues, followed by a procession of flags from the participating countries, ending with the flag of Hungary, which was taken onto the stage by Olympic and world champion water polo player Dénes Varga.

In his opening speech, President of the Republic János Áder recalled that Hungary’s first Olympic champion, Alfréd Hajós was also the first ever winner of an Olympic swimming event, and in addition to being an outstanding athlete, was also an excellent architect; one of venues of the World Championships on Margaret Island bears his name.

Following the speeches came the oaths of the athletes and judges. In the presence of divers Flóra Fazekas-Gondos and Villő Kormos, synchronised swimmers Szofi Kiss and Anett Schwarcz, and water polo players Manhercz Krisztián and Orsolya Takács from the Hungarian team, the oaths were spoken by two young swimmers, Olympic bronze medallist Tamás Kenderesi and ten-time junior European champion Ajna Késely, while starting judge of the swimming finals Viktor Bodrogi took the oath in representation of the judges and officials.

The World Championship logo also appeared for the first time as one of the highlights of the top sporting event ever held in Hungary, launched by one of history’s best ever female swimmers, five-time Olympic gold medallist Krisztina Egerszegi. The Fontana logo will appear at all future FINA World Championship events.

The opening ceremony ended with a rendition of the official song of the World Championships, performed by Gigi Radics and Nikolas Takács, followed by a concert by three-time Grammy award winning American artist CeeLo Green, who performed his hit songs Bright Lights Bigger City and Crazy.

The event was followed by a colourful firework display.

Some 2000 athletes from over 180 countries will be competing at the FINA World Aquatics Championships between 14 and 30 July in six disciplines: swimming, diving, synchronized swimming, water polo, and open water swimming.