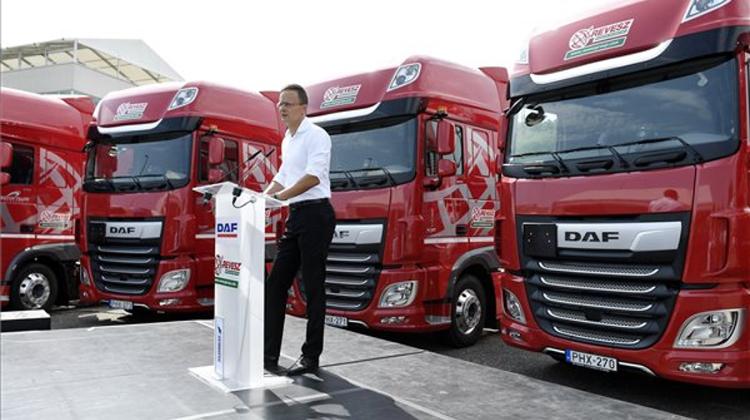 Hungary’s foreign minister has welcomed that the Hungarian-owned transportation and logistics company Révész Group would purchase 370 new trucks from the Dutch company DAF.

The deal announced on Sunday signals the growth potential of the Hungarian economy, Péter Szijjártó said at the Hungarian race of the FIA European Truck Racing Championship on Hungaroring in Mogyoród, near Budapest.

Szijjártó said that the output of the Hungarian automotive industry is expected to hit a record of over 8,000 billion forints (EUR 26.4bn) this year, putting the country among the “flagships” of the sector in Europe.

According to the Minister, the announcement is also an indication of the Hungarian economy’s development potential in view of the fact that one of the economy’s most important questions is how products get from “A” to “B”, and this requires logistics companies and infrastructure.

“If a country’s logistics capabilities increase, it is also an indication of the existence of major expansion prospects”, he added.

With reference to the diplomatic dispute with Holland, Mr. Szijjártó said he wasn’t worried that the foreign affairs disputes would endanger economic cooperation with an important European country, as also exemplified by today’s announcement.

In reply to a question, the Hungarian Foreign Minister repeated: on Friday he received a telephone call from the Dutch Foreign Minister, who disassociated himself from the negative comments about Hungary made by the outgoing Dutch Ambassador and stressed that those in no way mirror the standpoint of the Dutch Government, adding that he had accepted the disassociation and on Monday would be consulting with Hungary’s Ambassador to the Hague, who had been ordered home, to enable the necessary decisions to be made more rapidly.