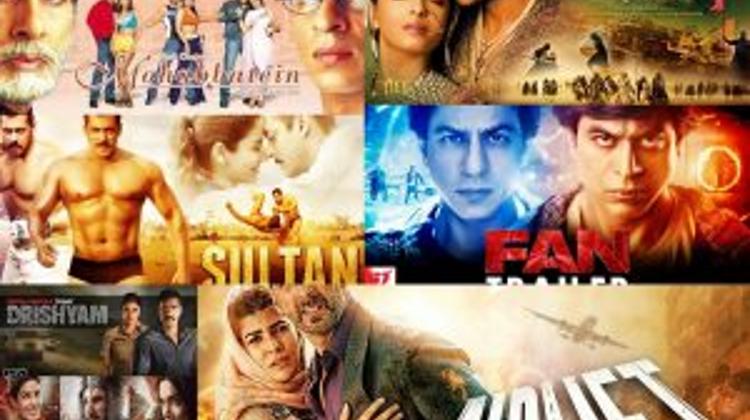 70 years ago, on 15 August 1947 India gained independence. Throughout the years 2017-2018, the Embassy of India and the Amrita Sher-Gil Cultural Centre celebrate this auspicious anniversary by organising a variety of special events. Joining the colourful repertoire on this occasion, we are holding an Indian Film Week between 5 – 11 October, 2017 in Puskin Cinema. Please note: The screenings are in Hindi language with Hungarian subtitles.

Among the contemporary Indian motion pictures, our selection for the Festival features classics from the last 15 years as well. The programme is inaugurated by H.E. Mr. Rahul Chhabra, Ambassador of India to Hungary on 5 October, 2017. During the Festival’s 7 days, we are presenting 7 Hindi language productions with Hungarian subtitles for our audience.

About Indian movies:
The Indian movie industry, which has the highest annual film production figures in the world is one of the most dynamically developing movie production machine; around one fifth of the 900-1000 films made every year in the country is made up by the so called ’Bollywood’ movies shot in Hindi language in and around Mumbai.

These movies represent a unique colour in the world’s cinema market, as the traditional pieces called ’masala movies’ which feature an eclectic mixture of different genres is a typical Indian product not found anywhere else in the world. Its roots spring from Indian cultural traditions going back several thousands of years.

Bollywood movies are dazzlingly spectacular, colourful and present many a different genres (like romance, comedy, action scenes, melodrama) making them capable to speak to and touch all social and age groups.

No Bollywood movie is complete without music and a usually lavishly staged dance scene shot in amazing sets and venues in which the stars dazzle the audience with a huge band of background dancers all performing in a myriad of exotic costumes.

In the past decade, Indian movies have incorporated all manners of influence coming from the West which only made the already versatile Bollywood industry even more diverse: in addition to the classic masala movies the repertoire now also offers youthful, modern romantic comedies, professionally choreographed action movies packed with special effects or satirical and realistic pieces similar to indie movies which enjoy huge popularity in western festivals.

Sanjay Leela Bhansali, known exclusively as the author of grand-scale, epic motion pictures, adapted the love story of two historical figures also woven through with legends to make Bajirao Mastani. His story is set in the first part of the 1700s and its hero is Bajirao, the Peshwa (Governor) of the Maratha Empire, who is considered the most prominent general in India’s history. Bajirao was of Hindu religion who truly loved his wife, however, out of political reasons, he also married a Muslim princess. And so Mastani came to live in the court, where, on account of her religion, Bajirao’s family never accepted her as their own. The man, having tender feelings for his second wife never lost a battle in his life, but it seems he won’t be able to conquer the obstacles threatening their love.

Bajirao Mastani, breaking box office records features the superstars of today’s stage of Bollywood. In the title roles, stars Ranveer Singh and Deepika Padukone while Priyanka Chopra plays Bajirao’s first wife. Nurturing his vision since the beginning of the 90s, Bhansali finally succeeded in realising his dream in 2015; a movie which, at the time of its debut was rated the most expensive production ever been made. At the most prestigious Indian movie Gala, the Filmfare award ceremony, Bajirao Mastani was presented with altogether 9 awards including Best Movie, Best Director, Best Actor and Best Actress.

Gaurav Chandna, a young man from Delhi has been living under the spell of Bollywood actor, Aryan Khanna since childhood. After winning an Aryan look-alike contest, he travels to Mumbai to meet his idol. Here the plot thickens with an unexpected turn: when Aryan is dragged through the mud in the press by his fellow actor, Gaurav takes kidnaps the man and forces him to make a public apology via a video uploaded on the internet. Gaurav is arrested and then, the momentous meeting finally happens: the disappointment, however, is all the bitter and cruel when Gaurav realises that not only Aryan does condemn his actions but also confess to be the one who handed him to the police. The disillusioned Gaurav is overtaken by his thirst for revenge, and swears never to let Aryan breath freely: either travel to London or to the Mediterranean, the actor who pushed him away can never escape him.

Almost as two elements of his own person, Shah Rukh Khan, the ’King’ of Bollywood portraits his own on-screen alter-ego and an obsessive fan in the rewarding dual role of the tense psychology thriller. The fascinating story of Fan keeping the level of intensity till the very end, tells about the glamour and the dark side of celebrity worship – the flesh and blood human behind the star’s mask and the obsession bordering on insanity that can be fanned up to flames in the average man.

Raj Aryan, the young music teacher applies for a job in the eminent boarding school for boys in Gurukul which is run with iron fists by the dreaded principal, Narayan Shankar. The young teacher, full of life tries to loosen the strict rules and regulations of the school which forbid the boys to leave school premises, to socialise and compel them to live in complete seclusion from the world. In secret, Aryan helps three of his students, Vicky, Sameer and Karan to go out and win the heart of their loved ones, the defiant and wilful wealthy heiress, Ishika, the bubbly chatterbox Sanju and Kiran, the young widow living in devastating loneliness in her father-in-law’s house. For these actions, Narayan Shankar is in constant battle with Aryan, however, as the story goes on, a secret buried in the past that they both share is revealed.

Mohabbatein is the second film of young success, Aditya Chopra which reinstalled the superstar status of 70s movie legend, Amitabh Bachchan whose star had been in decline in the previous one and a half decades. The shared scenes of Amitabh Bachchan and Shah Rukh Khan have become legendary by now, their duo is completed by Aishwarya Rai, however, the colourful and delectable act of the six young actors and actresses is what makes the movie a real delicacy. Mohabbatein is an epic piece of Indian cinema, which won three Filmfare awards (including one-one for the portrayals by Amitabh Bachchan and Shah Rukh Khan) and was further nominated in seven categories.

Receiving divine inspiration, the great Muslim conqueror, Jalal-ud-din Muhammad Akbar decides to marry the daughter of a Hindu King, Jodhaa Bhai to expand his empire and consolidate his power. Although every nerve in Jodhaa’s body protests against the political marriage, she agrees to marry him on the condition of being allowed to keeping her religion. After the wedding, however, despite her request granted, she still keeps her husband far away and therefore, among political intrigues, battles and other problems, the emperor also has to figure out how to win the heart of his beautiful wife.

Several contemporary accounts and legends telling the tale of the life of Akbar, one of the most notable emperors in the history of India have survived to these days. Basing his movie on historical facts and myths, in 2008 Ashutosh Gowariker created one of the most magnificent cinematic epics ever, shot in original locations with lavish and authentic costumes and jewellery, grand battle scenes and enchanting music composed by Oscar-winner A.R. Rahman. In the title roles, the movie features the two superstars of Indian cinema, Aishwarya Rai and Hrithik Roshan.

Vijay Salgaonkar is the manager of a cable TV service provider who often chooses to spend his nights far away from the bliss of family life watching movies in his office. One day, his elder daughter receives blackmailing messages with her compromising photos from a teenager, who, as a result of a tragic accident loses his life during a confrontation. The uneducated but streetwise Vijay armed with tricks borrowed from movies devises a brilliant plan to provide alibi for his family. However, none of them expects the mother of the victim to be a dauntless and hell-bent police officer. A ruthless cat and mouse game starts, in which men of law begin to lose sight more and more of the rules themselves.

The umpteen adaptation of the 2013 Malayalam movie of the same title revolves around the subject of crime and punishment; a gripping game of morality and, at the same time a thriller of twists and turns keeping surprises till the end.

Sultan’s life takes a new turn when he first catches glimpses of Aarfa, a state-level wrestling champion. Although, the girl very much likes the man coming from low social class, she wishes to marry only an accomplished wrestler like herself. So Sultan decides to win the girl’s heart, and if needed dedicate himself to intense training and win the state-level wrestling tournament. Eight years later Sultan is a middle-aged ex-wrestling champion living a mediocre and lonely life. When requested to join a private mixed martial arts league, he bluntly refuses to do so. The son of the team’s coach starts an investigation to shed light on how Sultan’s successful life reached such a low.

The third movie of Ali Abbas Zafar is a story told with spectacular action scenes about love, dedication and risks to be taken to reach success. The movie, which hit the theatres in 2016 and was nominated to five Filmfare awards is now the 6th highest-grossing movie of India.

Ranjit Katyal is a successful Indian businessman living in Kuwait who only looks after his own interests and he even sells out his own friends in favour of a good business. He and his circle are shocked at receiving the news of Iraqi troops overrunning Kuwait in August 1990, when the Indians suddenly find themselves in the middle of a war zone. Thanks to his business connections with the Iraqis, Katyal enjoys a certain degree of protection which enables him to somewhat protect his family, friends and employees. However, he is genuinely surprised when more and more Indians are seeking his help and soon realises that several thousand of his fellow countrymen and women are looking at him for protection and escape from the country ravaged by war and constant life-threatening danger.

The thrilling war movie, based on real historic events presents the infamous conflict from the point of view of foreigners trapped in Kuwait and focuses on the hero’s psychological drama. The movie, in which Akshay Kumar is thought to have given the best performance of his career yet received several awards and nominations and is noted as the 4th highest-grossing Bollywood movie of 2016.

The screenings are in Hindi language with Hungarian subtitles.

Tickets are available at Puskin Cinema from the end of September for HUF 1300.