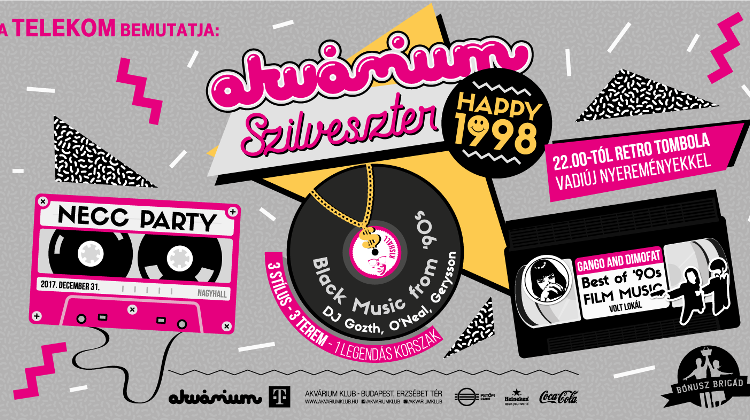 Three rooms, one entry ticket and mass time travel to the 90s – that’s what Akvárium Klub has to offer for this New Year’s Eve.

From the organisers: Following the already double sold-out December gig, the favorite series of the festivals and the Budapest party scene, Necc Party returns to the Main Hall of Akvárium Klub decorated with vinyl records and tape cassettes to see off the old year by playing the most embarrassing music of the period.

In the meantime, you can shake your ass to the greatest black RnB and hip-hop hits in the Small Hall amongst glitterballs and gold-chain adorned balloons, whilst VOLT Lokál will feature the iconic film hits of the era in the company of the images of famous movie stars.

It’s worth arriving on time since if you enter Akvárium between 8:30 and 10:00 pm, your ticket will automatically be included in the raffle draw starting at 10:00 pm, offering valuable prizes. The range of treats on offer include one pass each to the Sziget, VOLT, Balaton Sound and STRAND Festivals, a wine dinner for two at HáziÁllat, Bónusz Brigád gift vouchers, and a whole lot more.

Time traveling amongst glitterballs, tape cassettes and streamers is best done wearing a costume, so dress up as one of the greatest pop stars of the 90s and be Britney Spears for the night, or perhaps don the role of the well-known characters from Pulp Fiction. And if you’re looking for some change in your life, then our Wall of Resolutions is just what you need.

You can share what you want to do differently in the next year with the rest of the world and we’ll also have a Polaroid photo wall to make sure the last party of the year remains a lasting memory.