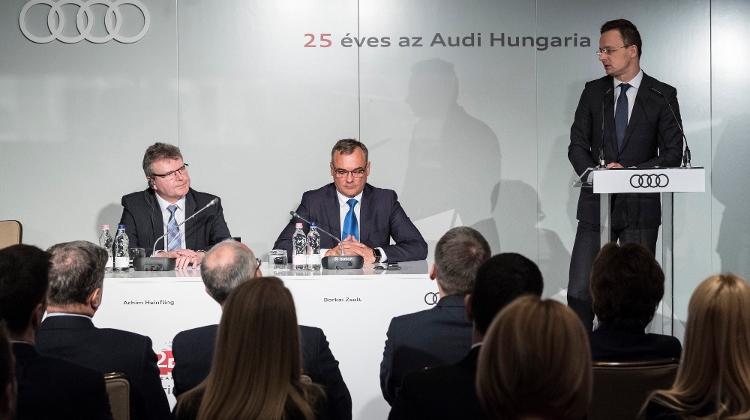 “Audi will be establishing a new research and development centre in Győr with an investment of 6.15 billion forints (EUR 19.7 million), one fifth of which is being funded by the Hungarian Government”, Minister of Foreign Affairs and Trade Péter Szijjártó announced at an event in Budapest to celebrate the 25th anniversary of the establishment of the automotive giant’s Hungarian subsidiary.

“30 new development engineers will be employed at the facility, which will be researching and developing e-motors and next generation internal combustion engines”, he told the press, adding that the automotive industry is the flagship industry of the Hungarian economy, the production value of which exceeded eight trillion forints (EUR 25.7bn) last year, providing 28.7 percent of the country’s industrial output.

According to Mr. Szijjártó, last year Hungary’s automotive industry exports increased by two percent and domestic revenues increased by 7 percent year-on-year, while the ratio of exports was 91.8 percent.

A quarter of a century ago, few people would have believed that by 2018 Audi would be investing over eight billion euros in Hungary, he said, highlighting that the company employs 12 thousand 300 people directly and including suppliers indirectly provides jobs to a further 30 thousand people, operates the world’s largest engine plant and is the country’s largest export-orientated company that generates the highest turnover.

Achim Heinfling spoke about the fact that Hungary made history in Hungary when in 1993 it established its first plant outside Germany with a factory floor of 65 thousand square metres and 700 employees, with a planned production capacity of two thousand engines-a-day.

During its 25 years of operation the factory in Győr has produced 33 million engines and, since production began in 1998, 1.15 million cars.

With respect to the future, Mr. Heinfling said “we will be continuing what we know best: manufacturing motors and cars at the highest possible level of quality”, indicating that series production of electric power sources and Audi’s new Q3 model will begin in Győr this year.

He also stressed the importance of the fact that the company maintains an excellent cooperation with both the city and the government, and said that the country’s economic environment, including its committed workforce, has played a major role in enabling one of the centres of European car production to be established here in Hungary.

At the event, Mayor of Győr Zsolt Borkai stressed that the fact that the company could count on the diligence, talent and perseverance of the Hungarian people and on the opportunities inherent in the city had played an important role in Audi’s decision 25 years ago, emphasising that in addition to the economy, Audi is present is many other areas in the city and is operating in close cooperation with it, whether with regard to culture, education, sport of healthcare.

The Mayor highlighted the fact that the successful cooperation between the company and the city also required a suitable approach on the part of the Government, with which it is possible to make plans and take the necessary action.

Without Audi’s committed employees, neither the plant, nor the city, nor the country would be as successful, he added.