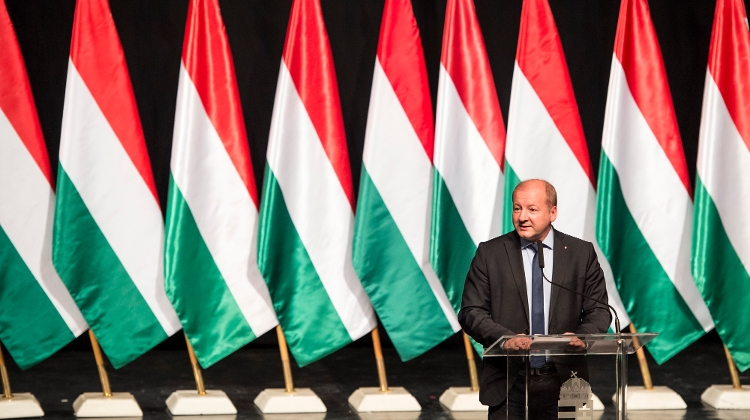 Speaking at the ceremonial staff meeting of the Military National Security Service (MNSS) in Budapest on Monday, Minister of Defence István Simicskó stated that covert threats present the greatest challenge.

According to István Simicskó, the detection and identification of these covert threats – together with timely warning and the preparation of decision-makers – are highly important tasks.

Speaking at the ceremony held on the centenary of the establishment of the independent Hungarian military national security service, the Minister of Defence also thanked the staff of the MNSS for Hungary’s being one of the safest countries today.

While many acts of terror are carried out in several countries of the world and Europe, the people of Hungary can live their everyday life in security, the minister explained, adding that this is the result of the efficient work done by the military and law enforcement organs as well as the military and civil security services.

István Simicskó pointed out that the meaning of “misinterpreted threat” has been known since the Trojan horse, and noted that these phenomena often result from “abusing people’s good faith”.

The Minister of Defence also said that the leaders of the European Union have entered an “incomprehensible competition” for seeing who can receive the most migrants.

Hungary and several other countries, however, believe that this is a wrong direction. Together with its allies, Hungary is competing for the protection of the European Schengen borders, because, as the minister said, “this is the token of our survival”.

Speaking about the latter, he announced that a decision has been made to establish a cyber defence command in the Hungarian Defence Forces, adding that the preparations for it are already under way.

Furthermore, the defence technology research center will also be further developed. In the interest of strengthening military diplomacy, offices of defence attachés will reopen in a number of countries, István Simicskó explained.

The minister said that these days there are conventional military and modern, hybrid warfare challenges as well. Hundreds of thousands of attacks may be launched against any country in cyberspace on a daily basis.

István Simicskó said that they intend to increase the active service strength of the Hungarian Defence Forces, so that they can have an active strength of 30,000 by 2026.

During the ceremony held on the centenary of the establishment of Hungarian military national security, the Minister of Defence and Chief of Defence General Dr. Tibor Benkő presented commemoratives to Lieutenant-General József Kovács, the Director General of the MNSS.

The event was also attended by, among others, representatives of the Ministry of Defence and the organizations of the Hungarian Defence Forces, as well as by the Director Generals of the civil services – the Constitution Protection Office, the Information Office and the Special Service for National Security.

As explained on the MNSS homepage, independent national military intelligence and counterintelligence services have been functioning since the dissolution of the Habsburg Monarchy.

The MNSS homepage also informs us that the integration of the two military national security services – MIO and MSO – began at the end of 2011. On 1 January 2012, the Military National Security Service was created with the merge of the MIO and the MSO.

In the structure of the MNSS, parallel organizations and tasks have been ceased, the speed of information flow has increased and the capabilities of the two former services complement each other.