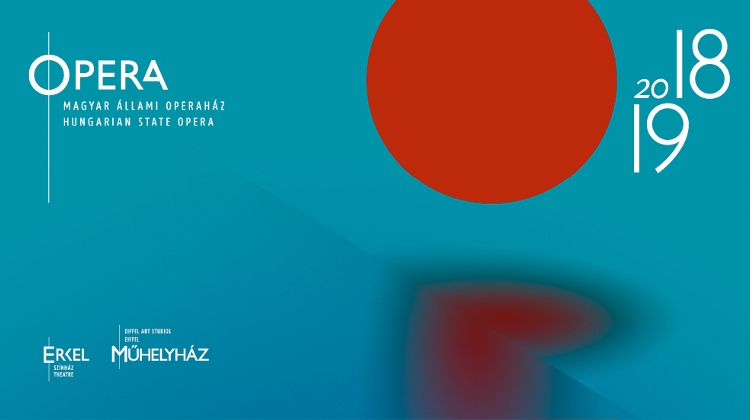 16 premieres, 60 repertoire pieces, the inauguration of the Eiffel Arts Studios as well as the reopening of the Opera House are all featured in the 2018/19 season of the Hungarian State Opera.

Until these venues are opened the resident companies of the Opera carry on touring: apart from guest appearances in county towns and Hungarian settlements beyond the borders of Hungary, the Opera is to visit New York, Berlin, the capitals of the Visegrád Group, and several Italian places that played an important role in the life of Puccini.

The thematical season of 2018/19 entitled “Puccini’s Italy” focuses on the composers of the turn of the previous century while putting emphasis on the life and work of Puccini, the most popular opera composer of the 20th century.

La fanciulla del West is to be staged by Vasily Barkhatov, a young director sought after on German and Russian stages.

Audiences can also enjoy a new version of Manon Lescaut directed by Máté Szabó, the first staged version of Edgar at the Hungarian State Opera directed by Ádám Tulassay, and for the first time ever at the Opera, La rondine in a production by Ferenc Anger.

Puccini’s contemporaries are also included in the programme.

Ponchielli’s La Gioconda is also staged by Ferenc Anger while La bohème by Leoncavallo and Il principe Zilah by Alfano can be seen in concert versions.

To crown the season, the thematical Puccini Festival will coincide with the reopening of the Opera House. Uniquely, all of Puccini’s operas will be performed at the month-long festival alongside song recitals, church concerts, ballet performances, screenings, and verismo operas.

The Choral Artist’s Mini Festival will take place again during this period, and the closing event of the festival will be the Hungarian debut of the leading Italian tenor, Vittorio Grigolo.

On the birthday of Mozart, 27 January, 2019, the Bánffy Stage at the Eiffel Art Studios will be inaugurated with the world premiere of a Mozart piece. L’oca del Cairo, ossia Lo sposo deluso is a pasticcio directed by Attila Toronykőy based on an idea by Szilveszter Ókovács using two unfinished comic operas by Mozart.

This new location will partly become a rehearsal stage apart from being a venue where mostly baroque, modern and contemporary performances can take place.

The Hungarian National Ballet expands its modern repertoire further with The Vertiginous Thrill of Exactitude by William Forsythe, and Bedroom Folk by Sharon Eyal and Gai Behar as parts of the ballet evening Triple Dance.

George Balanchine’s Sylvia Pas de Deux (based on Léo Delibes’s piece) will be featured in the OMG ballet night. All three choreographies will make their Hungarian debut.

The grandest ballet premiere of the 2018/19 season is Sir Kenneth MacMillan’s Mayerling (with music by Franz Liszt).

The choreography based on the tragic story of Archduke Rudolph and Maria von Vetsera returns to the repertoire after 13 years in a new production based on original designs.

Audiences can welcome many stars of the opera world at the Erkel Theatre.

In two performances of Lucia di Lammermoor the title role will be sung by Edita Gruberová, who appeared in this production during the Japanese tour of the Opera last year.

Elīna Garanča will return to Budapest with an aria recital, whereas the young Bulgarian soprano Sonya Yoncheva will make her Hungarian debut at our annual carnival gala.

Some of the Opera’s own stars will celebrate their jubilees as well: Eszter Sümegi, who has recently been awarded the prestigious Kossuth Prize, will celebrate 25 years on stage, whereas Mihály Kámándy’s 30-year jubilee will be celebrated with a special performance of Rigoletto.

The new season will see the Hungarian State Opera Orchestra accompany several international stars. They will appear in Veszprém, at the gala concert of José Cura, Erika Miklósa, Andrea Rost and Ramón Vargas. At the Margaret Island Open-Air Theatre, they will accompany Erwin Schrott.

The Orchestra is to continue the collaboration that started last year at Waldbühne Berlin with Anna Netrebko and Yusif Eyvazov, this time in Zurich and Cologne. Further concerts are announced with Juan Diego Flórez at the Royal Opera House in Muscat in Oman, and Joseph Calleja at Müpa.

Due to the constructions made on the Opera House and the Eiffel Art Studios the artists of the Opera continue touring in Hungary and abroad in the 2018/19 season.