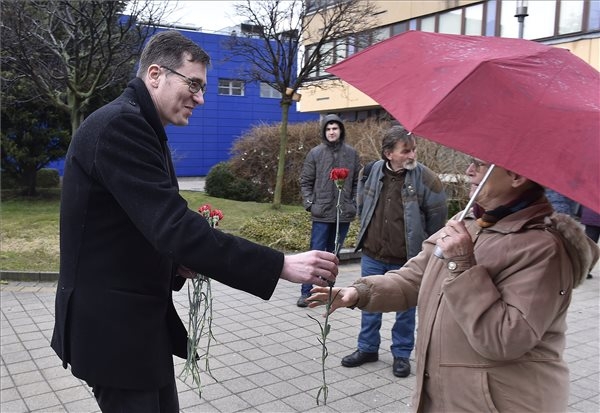 Opposition Socialist-Párbeszéd prime ministerial candidate Gergely Karácsony promised to get the Istanbul Convention ratified and guarantee equal wages for men and women if he wins the upcoming general election.

Referring to international women’s day being celebrated on Thursday, he said “the real women’s day in Hungary will be April 8” when voters go to the polls and can express their wish for the equal treatment of men and women in Hungary.

If Socialist-Párbeszéd come to form the next government, they will introduce effective measures against domestic violence, improve infant and kindergarten care, and increase the wages of women working in créches, he said.

Families will get a chance to decide how many children they want and women will not have to choose between a family and a career, he added.

Socialist board member Zita Gurmai said that as long as Viktor Orbán remained as Hungary’s prime minister, the issue of equal opportunities for women would not progress.

“Some ruling party politicians in this country take the liberty of hurting women”, she said, adding that poverty was prevalent among workers and the number of women forced to live in poverty was growing.

“It’s bad to be female, poor and a democrat in Hungary today,” she added. In government, Socialist-Párbeszéd would introduce equal wages for men and women in the constitution, she said.

Women account for only 10% of parliamentary lawmakers while they make up for 52% of society, she noted. Society with women in more roles tends to be more balanced, she said.

The Liberals, allied to Socialist- Párbeszéd, stated the same goals as the other two opposition forces in respect of women.

Ruling Fidesz said in response that the opposition parties’ women’s day messages were “empty rhetoric” because none of them had dissociated themselves from opposition Együtt leader Péter Juhász who “assaulted his partner and terrorised his family”.

Quite the opposite: they were celebrating together with Juhász, including Karácsony and DK leader Ferenc Gyurcsány, the statement said.