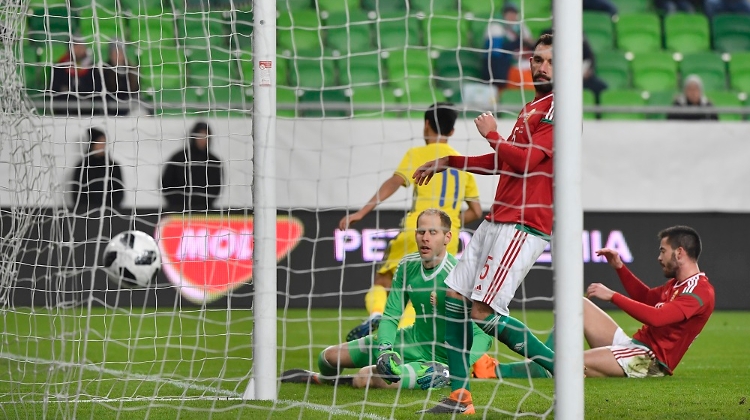 Georges Leekens’ first match in charge of Hungary ended in a 3-2 defeat against Kazakhstan in the Groupama Aréna on Friday.

Two early goals had given the visitors an unexpected advantage but Hungary staged a partial recovery with the help of Ádám Szalai’s goal and could have gone into half-time on level terms, only for Nemanja Nikolic to be denied when well-placed and for the Kazakhs to capitalise on a defensive lapse to score their third before the break.

The two early concessions were a devastating double blow to Hungary, firstly when a sixth-minute left-wing Bauyrzhan Islamkan corner evaded Ákos Elek, Ádám Szalai and Roland Ugrai on its way to Roman Murtazayev who gratefully turned the ball under the crossbar and into the roof of the net at the back post.

Four minutes later Kazakhstan doubled their shock lead when Islamkan tricked his way past two defenders and crossed to the edge of the six-yard box. Fiola got to the ball first and tried to clear but only succeeded in ceding the ball to Zainutdinov who wasted no time in shooting low towards the left corner of the net, the ball deflecting off Fiola and just evading Péter Gulácsi’s outstretched hand on its way in.

There followed a period of total shock for the home side and its supporters but hope for Hungary came in the form of Dzsudzsák’s quickly-taken 21st-minute free-kick, with which he found the feet of László Kleinheisler who had made a clever run into the right channel of the penalty area, his cut-back being diverted into the far left corner of the Kazakh net by the outstretched left foot of Ádám Szalai eleven metres from goal.

Two minutes later Kazakh defender Yevgeny Postnikov found himself a touch lucky to still be on the pitch after only receiving a yellow card for bringing down Nemanja Nikolic who had raced onto Kleinheisler’s pinpoint pass and in on goal.

The momentum was very much with Hungary at this point and Nikolic will be disappointed he didn’t haul Hungary level when he cut inside the box onto his left foot after again being sent on his way towards goal, his subsequent curling effort too close to Kazakhstan goalkeeper Nenad Erics to trouble him unduly.

At this stage it looked only a matter of time before an equaliser would come but the visitors managed to regroup and even restored their two-goal cushion before half-time, Murtazayev taking advantage of having been adjudged not to have pushed Barnabás Bese when dispossessing him and spreading the ball across the Hungary box for Erkebulan Seidakhmet to slide the ball back across Gulácsi and into the left side of the goal.

Half-time brought inevitable changes in personnel as Leekens sought to see a good amount of his squad in action, Szilveszter Hangya coming on for Endre Botka at left-back, Gergő Lovrencsics taking the place of Barnabás Bese in the other full-back position and Krisztián Németh replacing Roland Ugrai on the left wing.

It was Németh who provided the second half’s first moment of real quality when left-wing Hangya cross was cleared to him just outside the penalty area and he struck the ball soundly with his first touch and watched in delight as it fizzed with tremendous venom into the very far right side of the Kazakh net to leave Hungary only one goal in arrears with 23 minutes of the match still remaining.

Despite plenty of attacking endeavour though, Leekens’ team couldn’t find their way through a packed Kazakh defence as the clock ticked towards full-time. Central defensive debutant Kenneth Otigba’s long ball forward was flicked on by substitute Dániel Böde to eventually present another replacement Máté Patkai with a chance to find the target but his deflected shot was safely gathered by Erics

Szalai then saw another effort blocked and a Dzsudzsák free-kick stung the palms of the Kazakh keeper deep in added-time but their was to be no restoration of parity before Polish referee Tomas Musial blew his final whistle.