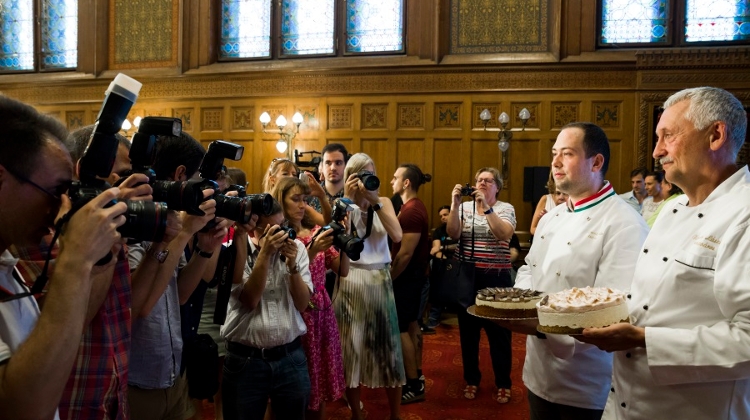 Each year a competition is organised by the Association of Hungarian Confectionery Manufacturers and the One Drop Attention Foundation to find the best traditional and best sugar-free cake in Hungary.

This year the Komáromi kisleány (little girl from Komárom) won, which is flavoured with pears, vanilla, and ginger, reports Heti Világgazdaság and cook ta. The best sugar-free cake is the Három kívánság (Three wishes) cake.

The ‘Little girl from Komárom’ was baked by Ádám Sztaracsek, a confectioner at the Jánoska Confectionery.

Sztaracsek characterised the cake with the following words: ‘the flavour is built around the pear, there is a layer of dark chocolate cream in it, a vanilla mascarpone mousse, a gingery pear compote layer, and two batters: one with walnuts and another one with walnuts and honey’. Sztaracsek entered the competition with several cakes, having used only quality, bio ingredients.

Now, the sugar-free cake: the winner is the ‘Three wishes’ nicknamed cake, the handy-work of the Nándori Cukrászda from Budapest.

Its three main components are an almond sponge-cake with chia seeds and walnuts, sour cherries and lumpy cottage cheese. There is an extra twist to it, a little bit of lemon juice and a sweet mousse on top.

Aside from being sugar-free, the cake was prepared without white flour. According to the Association of Hungarian Confectionery Manufacturers, one slice of the Three wishes cake contains 12.9 grams of carbohydrates and 242 calories.

You can try both cakes from the 18th of August in several confectioneries all across the country. You can also grab a bite at the Castle Garden Bazaar between August 18-20, when the Street of Hungarian Flavours takes place.