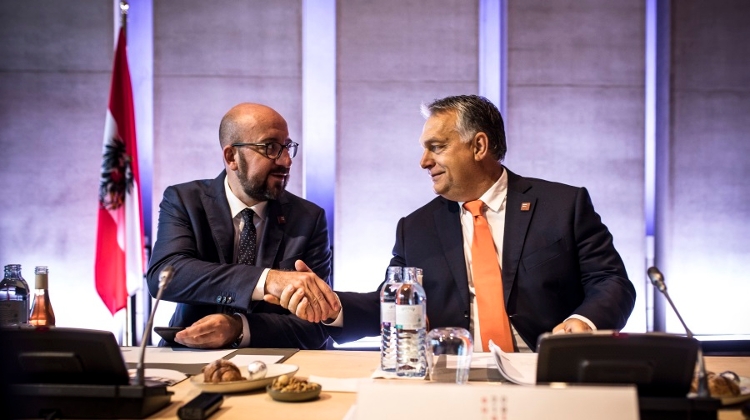 The Hungarian public still knows practically nothing about what went on at the informal summit of the European Council in Salzburg. The little information that reached Budapest came from Antal Rogán, who had a telephone conversation with MTI, Hungary’s news service.

He covered two topics. The first was the creation of a 10,000-strong border police under the aegis of Frontex, the European Border and Coast Guard Agency.

Although earlier Viktor Orbán had championed for a common defense of the European Union’s borders, as soon as the decision was made to officially propose it, he changed his mind and “arrived in Salzburg to make clear that Hungary won’t relinquish its right to defend its borders to Brussels and Frontex…. The Hungarian borders will be defended by Hungarian soldiers and policemen.”

At the summit, according to Rogán, Viktor Orbán won. The proposal was discussed, and those sections that would have infringed on national sovereignty “were thrown back,” I guess to those who proposed them in the first place.

But, Rogán added, “the battle hasn’t ended; the proposal will be discussed again between now and the end of the year.” Can anyone tell from this description what actually happened in Salzburg? No one knows. Yet most of the government papers simply republished the short MTI story.

The most innovative reporting came from Origo with an article titled “The events of the last few days confirm the victory of Viktor Orbán’s viewpoint.” What is this victory all about?

The answer was ingenious. The very fact that border defense was discussed at all at the summit is an “enormous victory” for the Hungarian prime minister.

Moreover, Origo insists that “several EU member states stood by our homeland” regarding the necessity of border defense.

As it turned out, Origo meant Bulgaria and Slovakia, two countries that support the Hungarian position.

The news about Bulgaria was incorrect at the time the article was written. Earlier in the day, the Bulgarian prime minister announced that his deputy’s previous information had been incorrect.

The other country that allegedly supported Hungary’s position was Slovakia, whose prime minister declared that Frontex should have only a supplementary function in the defense of the borders. But he also said that “European politicians should support every solution that can contribute to the defense of the Union’s borders.”

That doesn’t sound like a support for Orbán’s position, which would reject the presence of any Frontex personnel in member states.

In addition, the article contained a few ambiguous sentences about the position of Sebastian Kurz under the subtitle “Sebastian Kurz recognized that Viktor Orbán is right.” In what respect? “After embracing Viktor Orbán’s point of view, he announced that the decision to strengthen border defense was a forward-looking step.”

As if, with the exception of Viktor Orbán, all other EU politicians wanted to open up the borders and welcome millions of refugees and migrants. All in all, Origo managed to write a glowing report about Orbán’s performance in Salzburg when it seems that nothing really happened there.

The second piece of news that Rogán reported to MTI was that Jean-Claude Juncker failed to convince members of the European People’s Party (EPP) to expel the 12-member Fidesz delegation from its caucus.

We have known, at least since September 8, that if it depended on Juncker, Fidesz wouldn’t be a member of the EPP, but I didn’t realize that he was actually ready to campaign for Fidesz’s expulsion. Yet this is what happened, according to Rogán.

It is also interesting that Fidesz kept the existence of an EPP summit quiet. At least no news of it can be found anywhere. Rogán revealed that Juncker waited with his suggestion to get rid of Fidesz until just after Orbán had to leave for a face-to-face meeting with Sebastian Kurz.

Orbán apparently was beside himself and called him a “slippery labanc.” Labanc is an insulting term from the late seventeenth century for supporters of the Habsburgs. Eventually, he calmed down somewhat, and in his Friday radio interview he tried to excuse Kurz’s abandonment of him as a youthful misstep.

So, we have a fair idea what this tête-à-tête between Kurz and Orbán was all about, and I assume that it was not exactly pleasant. Not only does Kurz have a critical view of the state of Hungarian democracy, but he is in favor of a united front as far as the defense of the Schengen borders is concerned.

Magyar Idők came out with an editorial late tonight in which the author, Tamara Judi, describes Kurz’s efforts in this respect as “close to impossible.” We ought to keep in mind that since July Austria has been assuming the duties of the presidency of the European Union, and therefore the creation of a large force of border police must be overseen by Kurz and his team.

The article intimates that Kurz was co-opted and now stands on the same platform as Juncker and Angela Merkel. This is a real mistake on his part because Viktor Orbán’s supporters are many. All four of the Visegrád countries in addition to several other countries will not be cowed by Merkel, Juncker, and Kurz, “the slippery labanc.”

It is highly unlikely that Orbán will convince the Austrian chancellor to join the “kuruc” Hungarians led by Viktor Orbán. The Austrians had plenty of opportunities to learn that the “marriage” between the two countries was more often than not rather on the rocky side.