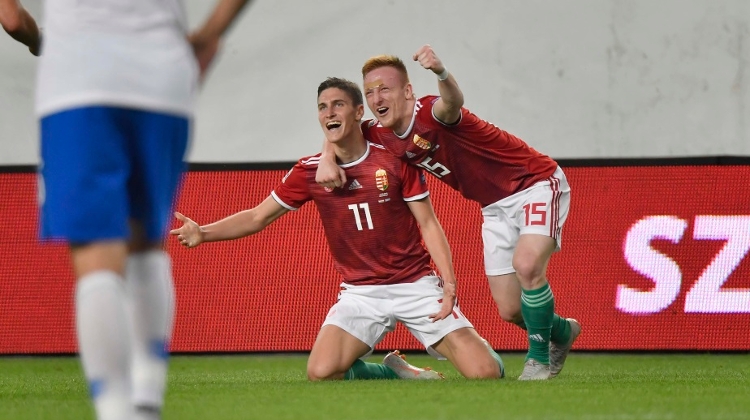 Fabulous first-half goals from Roland Sallai and László Kleinheisler against Greece in Budapest on Tuesday propelled Hungary to their first win under new coach Marco Rossi and ensured their first ever three-point haul in the new UEFA Nations League tournament.

Rossi opted to make three changes to the side which lost by a single goal in Finland at the weekend, Gergő Lovrencsics, Máté Pátkai and Zoltán Stieber making way for Barnabás Bese, Ádám Nagy and Roland Varga for this home match played behind closed doors in the Groupama Aréna.

Hungary started encouragingly, the returning Varga's fourth-minute effort only ruled out for offside and Tamás Kádár's long ball into the left channel only just succeeding in skipping away from captain Ádám Szalai and through to a grateful Vassilis Barkas in the Greece goal.

The visitors created their first opening in the 10th minute though and it came through Kostas Fortounis, the Greek playmaker outmuscling László Kleinheisler and cutting inside Tamás Kádár before unleashing a fierce drive which flew just past the post.

Varga would have been clean through on goal in the 10th minute but was again adjudged to be offside but his team were just warming up for what would be one of the finest pieces of interplay by a Hungarian team for quite a while.

Kovács started the move by sliding in Varga down the right wing, the Ferencváros winger playing the ball inside for Szalai to flick the ball first-time back to Barnabás Bese, the roving right-back in turn squaring the ball with his head to Sallai who volleyed exquisitely past Barkas down the centre of the goal.

It had been a superb sequence of passes and a marvellous finish for Sallai's first international strike but Hungary's lead would only last three minutes, Fortounis's centrally-positioned free-kick being headed past Gulácsi into the centre of the goal by a suspiciously offside Kostas Manolas after which Greece enjoyed a brief period of dominance.

A couple of minutes later, Anastasios Donis slipped a pass wide to Lazaros Christodoulopoulos who cut inside from the right wing and slammed a bobbling ball a metre wide of the far left upright.

The hosts were then indebted to keeper Gulácsi in the 32nd minute when he diverted a sharp, low, 17-metre shot from Dimitris Peikas around his right post, the second of two ensuing corners seeing the RB Leipzig custodian block a bullet downward header from Manolas.

The hosts recovered their composure though and reverted back to the free-flowing, one-touch passing football which charaterised their first goal. Indeed their second- and indeed what turned out to be the winning strike in the 44th minute perhaps even outdid Sallai's volley for beauty.

Another Varga run down the right ended with the tall winger cutting into the box and the ball deflecting to Sallai whose shot was blocked.

The rebound eventually landed at Kovács' feet and he drew an excellent save from Barkas, Kleinheisler follow-up being blocked and the ball being funnelled back out to Varga on the right who slipped in Kovács, the Videoton dynamo dancing into the penalty area and laying the ball off to the arriving Kleinheisler who thumped the ball high into the far right side of the net, far beyond Barkas' grasp, for only his second goal for Hungary following his famous debut goal against Norway in November 2015's European Championship qualifying play-off first leg.

Hungary hadn't seen two such spectacular goals in one first half for a long time but the 2-1 lead at half-time was certainly very much deserved. The second period was a very even affair, if perhaps a bit more physical and ultimately attritional.

Clear chances to score were at a premium and it wasn't until the 72nd minute that an opening presented itself, Gulácsi palming Pelkás's fierce drive over the crossbar for a corner, from which Christodoulopoulos planted a free header from ten metres straight at the Hungarian number one.

That opportunity rather opened the floodgates though, substitute Kostas Mitroglou blasting the ball to the left of Gulácsi in the 75th minute but the keeper getting down sharply to his left to divert the ball away from danger.

In the 78th minute, it was the home team's turn to threaten, Kovács being brought down 25 metres from goal and Kleinheisler stepping up to thrash the ball goalwards, only for Barkas to plunge to his right and shovel the ball away for a corner.

Greece were applying plenty of late pressure in search of an equaliser but, much like Hungary against Finland last Saturday, their forwards were not precise enough to find a way past the opposing goalkeeper, Sokratis Papastathopoulos the next to fail to hit the target when he headed disappointingly wide from a deep Fortounis free-kick on the right wing with eight minutes left.

Added time brought one more chance for Greece, an inswinging, left-wing cross glanced agonisingly wide of the far left post by the proligate Mitroglou but Hungary held on for a much-needed victory, their first this year, their first under Marco Rossi and their first in the inaugural Nations League, a result which puts the team second in Group C2 on three points, three behind Finland who boast two wins from two fixtures thus far.