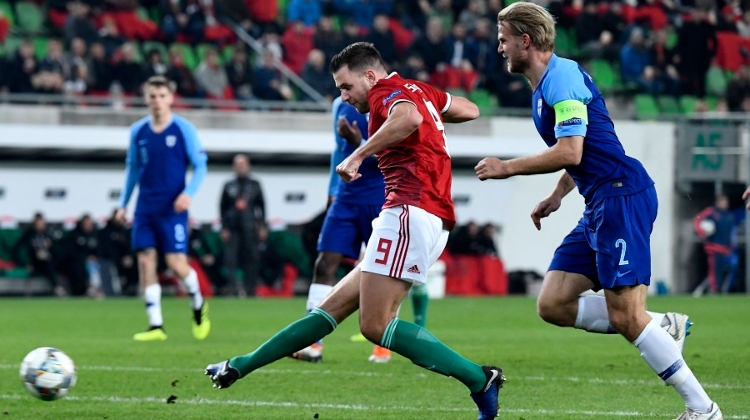 First-half goals from Ádám Szalai and Ádám Nagy propelled Hungary to their third straight home win and a second consecutive 2-0 victory at the Groupama Aréna, this time against Finland.

Hungary were already unable to win the qualifying group, this accolade already having been secured by their opponents in this sixth and final group fixture, but the home side knew a win could see them finish above Greece into second spot dependiing on other result.

With Máté Pátkai suspended after his second yellow card of the competition and plenty of options at his disposal, head coach Marco Rossi marked a return from his own touchline ban by making four changes to the team which defeated Estonia at home three days ago, Péter Gulácsi, László Kleinheisler, Gergő Lovrencsics and reappointed captain Balázs Dzsudzsák replacing Dénes Dibusz, Pátkai,

Kleinheisler volleyed over after Botond Baráth had cleverly headed Dzsuddzsák's half-cleared corner to his right where the FK Astana midfielder was waiting.

9' Dzsudzsák shifted the ball left to Ádám Nagy who then slipped it to Kálmár on the left of the visitors' penalty area, his subsequent clever turn inside opening up the chance for a low shot towards the far right corner of the goal, but he couldn't quite find the target.

Finland were twitching with intent too though and they served Hungary warning of this when Teemu Pukki stung Gulácsi's palms with a right-footed drive from a tight angle, having run through with just Baráth close to him. That wasn't the end of Hungary's worries though as the resulting right-wing corner from Sauli Valsanen was volleyed just wide by Robin Lod who had stolen in front of Tamás Kádár at the far post.

Two minutes later, Teemu Pukki had a chance to volley on goal from a very similar angle to his previous effort but again Gulácsi thwarted him at the near left post.

Those dances with danger jolted Hungary into playing a more pressurised game with and without the ball, a strategy which paid rich dividends in the remaining 25 minutes of the half, firstly when Ádám Nagy swiftly moved the ball across to Mihály Korhut in a central-left position midway inside the Finland half and Dzsudzsák's movement wide created the space for a pass into Kálmár, his neat flick inside giving Szalai the chance to stride onto the ball and rifle it past goalkeeper Jesse Joronen into the bottom-right corner of the net for his fourth goal of this inaugural Nations League campaign.

This superb piece of interplay merited that 29th-minute goal and it was just the start for the hosts, the impressive Ádám Nagy stealing the ball in midfield and surging towards goal before, surprisingly for him, unleashing a tremendously powerful, low half-volley which Joronen could only divert into the roof of the Finland net. This 37th-minute strike was the Bologna midfielder's first ever goal at international level and only his second in senior football.

As the half-time whistle blew it was clear Rossi's team were now fully in the ascendancy and despite injury-enforced substitutions of defenders Kádár and Baráth - Paulo Vinicius and Ádám Lang taking their places - this dominance continued during the second half, albeit there was little further in the way of goalmouth action.

Honvéd's Filip Holender came on in place of Korhut for his full international debut and it was he who had the first real sight of goal in the second period, Szalai and Dzsudzsák combining well to find the 24-year old free inside the penalty area in the 64th minute, but the ball seemed to skip across to him quicker than he was expecting and he could only hit the ball into the ground and up into the arms of a grateful Joronen.

Still Hungary pushed for more goals and when Szalai drew a foul on the left wing it gave Dzsudzsák the opportunity to whip a 78-minute free-kick into the box, but the ball arrived everso slightly behind Szalai and the Hoffenheim striker could only head it a metre wide of the near post.

Kleinheisler was next to threaten a minute from the end of normal time when he snatched the ball from a Finland defender close to goal and let loose with a low strike with his left instep, only for Joronen to gather safely having positioned himself well.

The away team, despite a spirited attempt to gain a foothold in the game towards the end, were unable to make any headway and Hungary were full value for their third straight home success in this fledgling comptetion.

Indeed, with Greece losing at home to Estonia, these three points took them above their rivals from the Mediterranean and into a second-place finish in Group P behind winners Finland.