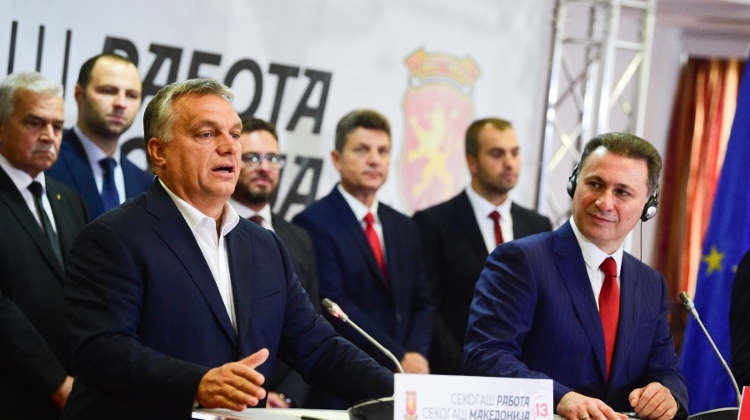 As the Prime Minister explains that his former Macedonian counterpart deserves ‘decent treatment’ from Hungary, opinions continue to sharply differ on the decision to grant him political asylum.

In his customary bi-weekly interview with National Public Radio, Prime Minister Viktor Orbán said he did not know whether the charges levelled against Mr Gruevski were well founded or not, but the former right-wing Premier was an ally, the first leader who joined Hungary in building a border fence to prevent illegal mass immigration and therefore  deserves what he called decent treatment by Hungary.

The Prime Minister also said that the organisations which criticise the decision of the Hungarian authorities to grant Mr Gruevski political asylum are the same ones which support migrants who illegally cross European borders.

In 168 óra, Gábor Miklós a former Népszabadság foreign desk editor believes that the Hungarian Prime Minister intends to become ‘the elder brother’ of other right-wing leaders in the Balkans but doubts if local politicians find such a patronising attitude attractive.

He doesn’t exclude the possibility that Mr Orbán was moved in Mr Gruevski’s case by personal feelings. He also believes that Mr Orban may have promised to lend the former Macedonian Premier a helping hand in case the latter finds himself in trouble. Miklós  nevertheless finds the price Hungary has to pay for that gesture in terms of diplomatic conflicts too high.

On Mérce, Szilárd István Pap also thinks that the Hungarian government is trying to build a network of support in the Balkans and is protecting Mr Gruevski because he was part of that network. He deplores the opposition which has no reaction to such a Balkan network, although there are left-wing parties there with whom they could cooperate.

The former Macedonian Prime Minister, he explains, must have a huge amount of information about the Balkans and it may be rational to weigh the advantages of helping him against the drawbacks.

He speculates that in case Mr Gruevski doesn’t remain in Hungary for long, it would be logical to suspect that Hungary didn’t act on its own initiative in transferring him from Albania to Budapest.

On Pesti Srácok, Tamás Pilhál fulminates against the leaders of opposition parties which accuse the Hungarian Prime Minister of sheltering Mr Gruevski because he himself is afraid of being criminally prosecuted once he loses power.

The pro-government commentator finds particularly tasteless DK chairman Ferenc Gyurcsány’s remark according to which ’jail is the right place for criminals like Gruevski and Orbán’.

If that ‘horror coalition’, he writes, were to come to power through a coup organised from abroad, the scenario would be the same as in Macedonia – political opponents would be hunted down and sent to prison.

He also rejects the argument that once Hungary considers Macedonia a safe country and turns away asylum seekers coming from there, she should not grant asylum to a politician condemned there for corruption. He doesn’t believe the judiciary is independent in Macedonia, but that doesn’t mean that Middle Eastern migrants are persecuted there.

In Magyar Idők, the other pro-government daily sold nationwide, András Kárpáti writes that Mr Gruevski was indicted by a special prosecutor’s office set up by the new government and the court ruling about the charges put forward by this new institution has been stacked with new judges by the new government.

He believes therefore that the former Macedonian Prime Minister can credibly claim that he is not treated fairly by his country’s judiciary.

In another Magyar Idők article, Kárpáti quotes Tsvetin Khilimanov a Macedonian journalist who accuses the new government of this country of having released Islamist ethnic Albanian terrorists who had been jailed by the Gruevski administration, and therefore the former prime minister can reasonably fear for his life at home.

He has already been the target of an assassination attempt and this is why he ordered his interior minister to buy an armoured Mercedes car. He was condemned this year for that order and Khilimanov thinks the charge of corruption was trumped up. Mr Khilimanov is the founder of the Macedonian ‘Stop Operation Soros’ movement which was an ally of Mr. Gruevski’s government.