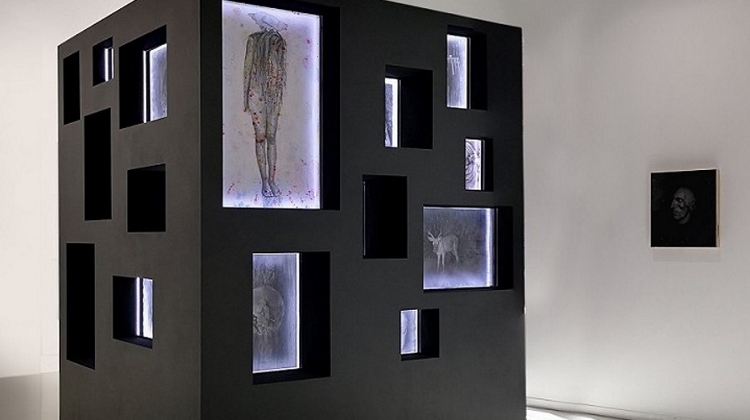 Now on until 20 October. The solo exhibition by Attila Szűcs, who shows his most recent works in Budapest for the first time since his highly acclaimed 2016 retrospective in the Ludwig Museum.

The central element of his exhibition is a massive Black Box. The art historical subtexts of a black square are associated with sharp and subversive meanings, which are broadened here by the unusual spatial expansion of Szűcs's installation.

This motif, however, is not at all unique in the practice of the artist: the ominous black square emerges on some of his most emblematic paintings, like The Death and the Maiden or the Preparing for Darkness, to mention a few.

The square or its mutations, as abstract elements, also often appear, as windows, doors, picture within pictures or even as carefully structured stack of books.

“The centerpiece of the exhibition, the Black Box, points the visitors to Stanley Kubrick's legendary monolith and to the imitated interview I made with the director after his deaths. The box symbolizes all conceiving possibilities of the fake news, that is, of the inexhaustible sources of intuitive cognition”, says Szűcs about his new work.

The fragmented interview outlines an utopical future and remarks some surprising analogies with today’s reality. There are timeless truths and parallels, just as the black box in the white gallery space is reminiscent of the peculiar monolith of Space Odyssey’s raw, pre-historical land.

The box itself is a wunderkammer, in which Szűcs hid his most recent drawings. With this gesture, he creates an unusual exhibition situation and turns the gallery space inside out. Szűcs’s Black Box can be looked at and interpreted in many ways, as a metaphor of time and its relativity, or as of the vanishing difference of real and fake, but its symbolism certainly offers keys to its individual understanding.

Attila Szűcs was born in 1967 in Miskolc. His works can be found in the most important international and Hungarian public and private collections, he exhibited extensively through Europe and the USA. Presently he participates in a group exhibition in the St Petersburg based Marina Gisich Gallery.