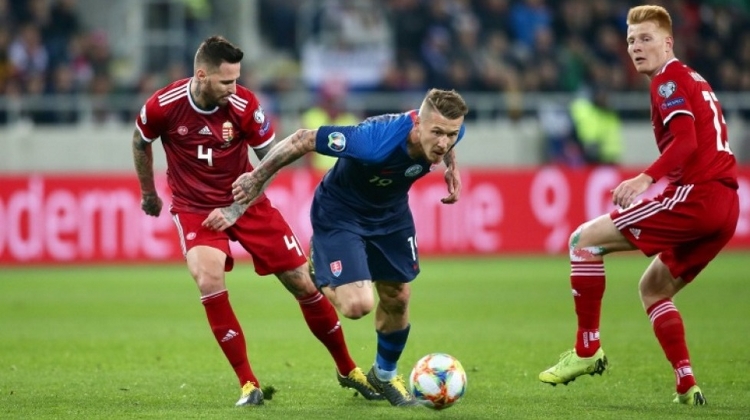 Goals from Ondrej Duda and Albert Rusnák put paid to Hungarian hopes of a positive start to their UEFA Euro 2020 qualifying campaign as Slovakia eased to a 2-0 home victory in Trnava tonight.

An even first-half stalemate was broken by a neat attacking move down the right which left Duda with a simple tap-in to put Slovakia ahead just before the break and despite plenty of Hungarian pressure in the second half, the hosts preserved their lead and even doubled it five minutes from full-time, Rusnk sweeping in from the right wing and dispatching the ball into the bottom-right corner of the net to secured victory for Pavel Hapal's side.

Hungary head coach Marco Rossi plumped for a 3-5-2 formation with the ever-reliable Péter Gulácsi in goal behind a three-man defence of Tamás Kádár, Willi Orbán and Ádám Lang.

Mihály Korhut on the left and Gergő Lovrencsics on the right provided the wing-back options while Ádám Nagy and László Kleinheisler were the central-midfield screens behind László Kálmár in a deep-lying playmaker's role and István Kovács and Ádám Szalai upfront.

A tentative first ten minutes made way for a period of home dominace and the first clear sights of goal. In the eleventh minute, Albert Rusnák pulled the ball back for Marek Hamšík but his poor first touch led him away from goal and he couldn't threaten Gulácsi with his eventual effort off target.

Next to go close for Slovakia three minutes later was Peter Pekarík who fired a right-footed shot across the six-yard box and towards the left corner of the Hungarian goal from 14 metres, but Gulácsi was alert enough to beat the ball wide for a corner.

Four minutes later, Dávid Hancko collected a pass across the edge of the area and looped a half-volley onto the top of Gulácsi's crossbar from a central position as the home team moved closer and closer towards taking the lead.

The 41st minute saw István Kovács create Hungary's first clear chance of the game but his effort inside the penalty area was blocked and the hosts took full advantage just a minute later.

Ondrej Duda was the man to open the scoring for the hosts, Pekarík sliding in Rusnák down the right wing and his low cross was eased into the net by Duda with his right foot just a few metres out.

After the break, Gergő Lovrencsics latched onto a loose ball on the right side of the box but Hungary's right wing-back could only find Martin Dubravka's arms with his shot from a tight angle.

The 62nd minute brought about one of the visitors' best chances of the match, Nagy heading forward, Orbán knocking the ball down and Szalai seeing his first-time volley acrobatically saved by Dubravka down to his right.

Back came Sovakia and Duda set up Róbert Mak for a fierce drive but Gulácsi diverted his fierce drive away from danger.

Hungary were ofter dangerous in the second half though, and when Lovrencsics's long, raking pass found Orbán on the far left channel of the penalty area in the 72nd minute a real chance to equalise presented itself, but the RB Leipzig defender's header wasn't high enough to lob Dúbravka, who was well out of his goal.

Four minutes later, Dzsudzsák capitalised on an advantage played following a foul on Szalai, but his swerving left-foot attept on goal few narrowly over.

Slovakia were close to doubling their lead in the 82nd minute, only for an offside flag to rule out Pekarík's close-range finish. They wouldn't rue that decision for long though, Rusnák gathering a long, diagonal pass three minutes later before cutting in from the right and slotting the ball left-footed inside Gulácsi's near left post.

Dzsudzsák's late free-kick was easily saved by a plunging Dúbravka as Slovakia thwarted the visitors in every way.

Hungary's next match in this Euro 2020 qualification campaign will be at home in the Groupama Aréna in Budapest this Sunday when Croatia are the visitors.