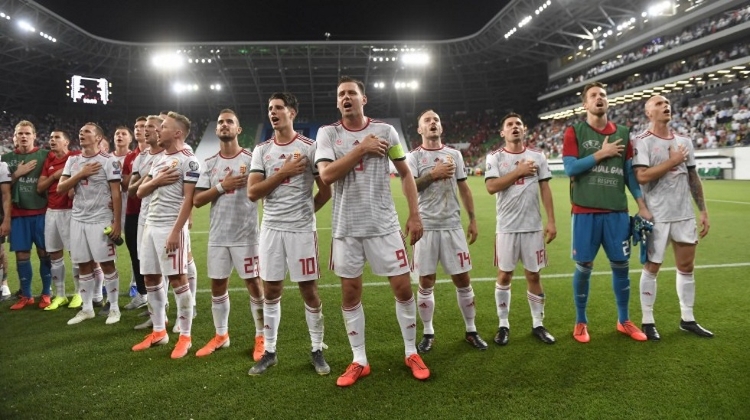 In a game largely dominated by the home team and littered with missed chances by both sides, it was Pátkai's intervention when presented with a clear sight of goal following good work from Ádám Szalai that made the crucial difference and put Hungary in pole position in a tough group comprising World Cup silver-medallists Croatia and UEFA Euro 2016 participants Slovakia as well as semi-finalists from that year, Wales.

Rossi was banned from sitting on the bench for this match due to his dismissal against Azerbaijan on Saturday but he wasn't afraid to make several changes from that winning side, Máté Pátkai and Filip Holender coming in for László Kleinheisler and Dominik Nagy.

Hungary started with confidence and a dangerous inswinging Dzsudzsák corner in the third minute had Wales goalkeeper Wayne Hennessey scrambling to tip clear at his far right post.

The hosts couldn't press home this initial advantage though and instead Wales settled into the game, Tom Lawrence flicked back-heel forcing a regulation save from Hungary's goalkeeper Péter Gulácsi after a low, skidding, right-wing cross from Joe Allen.

Next to go close were the hosts when Dzsudzsák's free-kick from the right side of their attacking half was headed half-clear to Dominik Szoboszlai 14 metres out, whose header at goal drifted just wide of the right post.

Another raucous home crowd were roaring on this young, vibrant team in their usual inspiring way and their heroes were responding, Lovrencsics shifting the ball to Dzsudzsák in the right channel who in turn slid in Ádám Szalai who'd made a well-timed run into the right side of the Wales penalty area.

The burly Hoffenheim striker had space and time to slide the ball invitingly across the six-yard box but the onrushing Filip Holender couldn't quite arrive in time to divert the ball into the waiting net.

An open, entertaining first half continued when new Manchester United signing James danced down the right and slipped a pass inside to Tom Lawrence who shot low left-footed from ten metres but disappointly straight at a grateful Gulácsi.

Dzsudzsák then swung in a dangerous left-wing cross which fell to Szalai but he couldn't adjust in time to shoot on goal, although he did still earn a corner for his efforts.

At the other end, Joe Allen will wish he'd done better with a wayward shot from distance in the 35th minute but in truth it was the home team dominating proceedings, Szoboszlai heading Dzsudzsák's inswinging, right-wing corner just wide of the near post just a minute later.

James and David Brooks brought a little mirth upon themselves from the crowd after failing to decide who'd be taking a free-kick before yet another searching cross from Hungary's captain Dzsudzsák somehow evaded Szoboszlai arriving at the near left post.

That was the last sight of goal in the first period and a brief malaise continued after the restart before Cosimo Inguscio's team - the Italian assistant coach standing in for suspended head coach Marco Rossi, who was dismissed during the 3-1 defeat of Azerbaijan last Saturday - put together a neat move in the 56th minute, one which only ended with Lovrencics crossing from the right and a half-clearance arriving at Szoboszla, who controlled the ball well enough but could only half-volley the ball narrowly over the right side of Hennessey's goal.

Wales' best chance of a goal always seemed likely to come from their quicker forwards on the counter-attack and their opportunity arose on the hour mark when David Brooks broke forward and released Tom Lawrence down the right channel.

He laid the ball on a silver platter for Gareth Bale who was first to arrive in the penalty area but the Real Madrid CF star could only scuff his shot tamely up into the air for Gulácsi to gather.

A subdued Wales were really there for the taking and with 15 minutes Hungary nearly made their supremacy in possession count. Substitute László Kleinheisler stung the palms of Hennessey with a rasping drive from 25 metres and they were again close to finally taking the lead from the resulting corner, only for the referee to judge the ball had not crossed the goal line following a goalmouth meléé.

At the other end Gulácsi struck lucky when his attempted clearance looped onto the roof of his own net after being charged down and Lady Luck was stay faithful to Hungary moments later when Szalai's turn and control saw the ball roll free to midfielder Máté Pátkai, whose first-time shot from 11 metres arrowed past Hennessey, inside his near left post and rippled the back of the net.

Another replacement Roland Varga's 86th-minute inswinging free-kick from the left missed both Szalai's head and the inside of the far right post as Hungary rode the crest of a wave and looked likely to score again with every attack.

Varga slid the ball low across the box but again to no avail and Ashley William's hook across the Hungary box was somehow missed by a waiting Bale at the back post as both teams piled on the pressure in the closing minutes. Bale did finally get an effort on goal in added time but his header from ten metres was straight at Gulácsi, the ball and therefore the three points nestling neatly in his gloves.

This latest win - their fifth in a row at home - keeps Hungary at the top of Euro 2020 qualifying group E, their nine points three more than Slovakia and Croatia who both have six. Hungary's next qualifier is on 9th September at home against Slovakia.