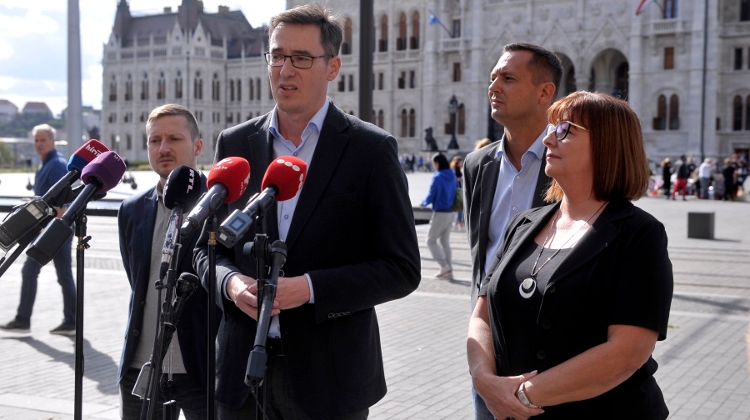 A leaked audio recording has emerged in which opposition Budapest mayoral candidate Gergely Karácsony can be heard talking about threats made against his family and clashes he has had with other opposition politicians, according to news portal 444.hu.

Karácsony has confirmed the authenticity of the recording. In the audio file edited together from separate recordings from a past conversation, Karácsony is heard saying that Csaba Tóth, head of the Socialist Party’s 14th district chapter, had made multiple threats against his family.

“Unfortunately he’s a rock in this whole construct, more so than … anyone else,” Karácsony says of Horváth. “The whole matter of removing him from this thing and convincing him to take part in the primary, that was the consolation.”

Concerning the 14th district local council, Karácsony said only a Socialist politician could keep the Socialist councillors in line. He criticised the party’s previous mayoral candidate there, saying “he would be lost within two minutes and everything would be stolen behind his back”.

“At least Csaba [Horváth] has enough brains to know what it is you can go to jail for,” Karácsony can be heard saying. On the subject of his future, Karácsony says that if he returned to the 14th district, “they’d do me in … I could tell you some stories, but we can’t run joint campaigns with the Socialists”.

He is also heard discussing his “blackmail potential”, saying it could “put everything into place”.

Karácsony also talks about Erzsébet Gy. Németh, the Democratic Coalition’s mayoral candidate in the 17th district, saying that “there’s no threat of her … winning the election.”

Asked by 444 to comment on the recording, Karácsony said the conversation in question had probably taken place “several months ago” and he did not remember who he was talking to. He added, however, that he recognised the tactic of leaking the recording as “that of [ruling] Fidesz”.

He said the conversation heard in the recording had centred on the joint opposition election campaign. Though it took a lot of debate to bring the opposition together, “the alliance is now strong”, he said. Karácsony confirmed that he had received threats on multiple occasions, though they had not come from political players.

Asked to comment on what he had meant by his “blackmail potential”, Karácsony said he was not interested in holding any office, but was concerned with fighting for issues.

Karácsony later told a press conference that he will file a criminal complaint over the recording and leaking of his conversation. He said the recording had been edited and “clearly made illegally”. He said Fidesz was “so afraid of a united opposition and of losing its power” that it was now “using secret service techniques” against him.

Karácsony insisted that he would not be intimidated, nor would the unity of the opposition parties be broken. He insisted that he does not say anything in the leaked recording that he had not talked about before in public.

Socialist Party MEP István Ujhelyi said Karácsony was the victim of the kind of smear tactics that had been used against political opponents in single-party states. He speculated that this was being done in response to Karácsony’s calls for a debate between Budapest mayoral candidates.

Rather than agreeing to a debate, “we’re seeing a dirty political smear campaign”, he said. Ujhelyi said it had become clear that Prime Minister Viktor Orbán and incumbent Budapest Mayor István Tarlós “are afraid of Karácsony”.

Commenting on the affair at his regular press conference, Gergely Gulyás, head of the Prime Minister’s Office, said the recording was worth listening to by anyone interested in how things are behind the scenes on the left-liberal side. Gulyás said the situation on the left was reminiscent of “mafia-like conditions”.

He said Karácsony was also a part of this, adding that the mayoral candidate’s “excuses” in the matter were “pathetic”. Gulyás said that though it had already been clear that Karácsony was “unfit” to lead the capital, today’s report would only make that “all the more obvious”.