Maiden Szoboszlai Goal In Vain As Hungary Slip Up Against Slovakia 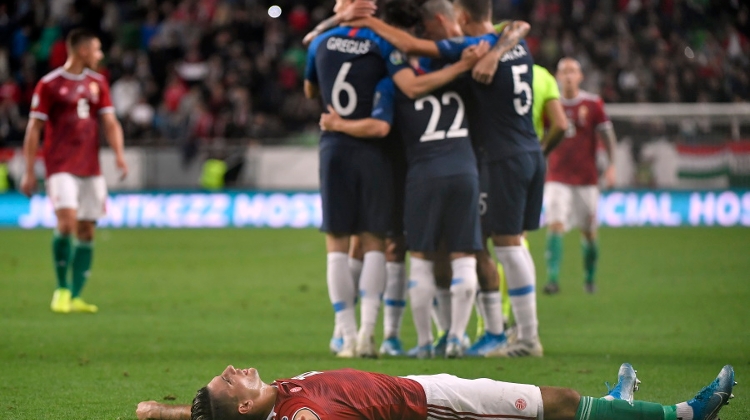 Dominik Szoboszlai's superb second-half free-kick was not enough to help Hungary secure any points from their Euro 2020 qualifier at home against Slovakia, Marco Rossi's team eventually succumbing 2-1 in the Groupama Aréna on Monday night.

Slovakia had taken a 40th-minute lead through Robert Mak's close-range finish but Hungary playmaker Szoboszlai hauled his team back on level terms with a fabulous curling free-kick, only for striking prodigy Robert Bozenik to seal a potentially vital victory for the visitors with a well-taken shot on the turn.

Ádám Nagy was deemed fit enough to take his place at the base of midfield alongside László Kleinheisler with the attacking trio of Roland Sallai, Dominik Szoboszlai and captain Balázs Dzsudzsák in front of them and Ádám Szalai ploughing his usual lone furrow upfront.

Initially, it was Slovakia who dominated possession but Hungary found a way to retain the ball and soon made inroads down both flanks, Sallai nearly wriggling free in the left channel and Dzsudzsák surging down the right before sliding in Kleinheisler for a sight of goal, only for the burly midfielder to shoot tamely, straight at Slovakia goalkeeper Martin Dubravka.

Visiting striker Robert Bozenik had the ball in the net for Slovakia near the end of the first ten inutes but that was correctly ruled out for offside before Hungary's left-winger Sallai just failed to reach a deep, inswinging cross from the right by his captain.

Szoboszlai's low drive from Szalai was well-held by Dubravka and Sallai's low, left-wing pass along Slovakia's six-yard line evaded Szalai as Hungary really started to threaten at every opportunity.

At the other end, Gulácsi had less to do, but still had to be alert to dive to his left and smother Robert Mak's crisp, low shot from twenty metres. Kleinheisler's persistence in central midfield then forced a mistake which yielded the ball for Szalai to turn and test Dubravka's reflexes again in the 24th minute, but the hosts were dealt a blow when Lovrencsics was forced off with a hip injury, the Ferencváros full-back replaced by Barnabás Bese.

Still, all the signs from general play were that Hungary were on the right track, but they were suddenly knocked off course five minutes before half-time. Szoboszlai failed to notice Marek Hamsik creeping up on the right-wing so when a crossfield pass was played from left to right, it left Kádár facing two attackers and Hamsik with time and space to send in a low cross to a suspiciously offside Bozenik.

The linesman saw the situation otherwise though and although Baráth pressured the forward into a miskick, Mak was on hand behind them to bury the rebound low past Gulácsi from eight metres.

This was tough on Rossi's men, who surely deserved to at least be level at the halfway stage but it wouldn't be long before they did restore parity. Szoboszlai played a pass into Sallai just outside the left side of the Slovakia area, who drew a foul from defender Dennis Vavro, set-piece specialist Szoboszlai then stepping up to curl a sumptuous fiftieth-minute free-kick over the away team's defensive wall and inside the top-left corner of the net for his first goal at full international level.

The fiercely-partisan capacity home crowd went wild as they celebrated an equaliser and, at the same time, the emergence of another promising young international player, but unfortunately Hungary's players couldn't capitalise on their foothold in the game.

Instead, it was Slovakia who drew blood next, Stanislav Lobotka playing a nice one-two with Junaj Kucka in the 56th minute and cutting in from the right wing before playing in Bozenik, the 19-year-old MSK Zilina striker showing admirable composure and deadeye accuracy to fire the ball low and just inside Gulácsi's left post and edge his side into a 2-1 lead.

That advantage was nearly doubled in disastrous circumstances a few minutes late when Orban let a high ball drop off his thigh and into the path of Hamsik but his shot was blocked by Gulácsi and his desperate defenders and the ensuing rebound was volleyed over an empty goal by the wasteful Mak.

Dzsudzsák twice nearly took advantage of that miss midway through the second half, firstly a shot from distance scuttling wide of the right post and then a superb turn and high, right-footed effort which Dubravka did really well to tip over the crossbar.

Hungary kept up their search for another leveller but they seemed to tire more and more as time ran out, the exhausted Nagy and Kleinheisler replaced by Máté Pátkai and Filip Holender respectively as the entrance of fresh legs preceded a final assault.

However, it was Slovak captain Hamsik who came closest to scoring the next goal, his 84th-minute drive from close range beaten behind by a sprawling Gulácsi. This setback now leaves Hungary third in the group - one point behind leaders Croatia who drew in Azerbaijan earlier today and level on nine points with Slovakia, who leapfrog Rossi's team by virtue of a better head-to-head record.