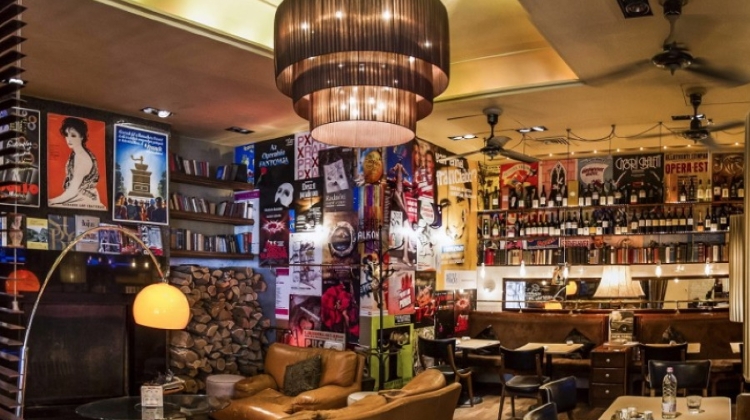 Michelin stars aren't the be-all and end-all at every decent restaurant in town – not at Déryné Bisztró, for instance, where the proprietors feel it's much more important to maintain their good reputation that rests on the family-like service they have painstakingly built up over the years.

The formal atmosphere and fancy menus of fine dining establishments simply aren't the goal at Déryné, and instead they have established a congenial and warm atmosphere, much like when friends come together for a pleasant evening at someone's home.

And somehow it all seems so effortless and natural: everything fits nicely and there's no feeling that they're straining to impress – the food and drink, the service, décor, music, even the gently turning overhead fans and the plants somehow all combine nicely to form an impressive whole.

Newspapers hang from the wall. There are old photos and posters. The pianist is on hand or there is a band that plays light jazz or Gypsy swing. Iced fish and oysters imported fresh are displayed on metal trays at the centrepiece of the place, the circular bar. A silver hand-bell is pinged often as a signal that courses are ready to be served. The mood is just right.

The history is part of the fabric and the popular spot has been a city institution on the Buda side for more than 100 years.

It began as a coffee house and patisserie that was opened there in 1914 by the Auguszt family, after whom it was named initially and whose name remains prominent on a handful of cake shops in the city today.

The establishment is therefore into its second century, and this is an important heritage that the current owners, the Kovács family, don't take lightly, as Kristof Kovács explains:

"This was the Auguszt family's first patisserie-coffee shop, and one of the largest on the Buda side. The family became one of the two or three patisserie dynasties in Hungary.

"Coffee houses then were institutions in Budapest and Vienna, and had comforts that often weren't found at home, such as telephone, heating and lighting. They became a second home for artists and writers or an office for doctors and lawyers.

The city helped coffee houses to develop facilities that it couldn't itself, and granted them tax relief to stay open 24 hours.

"We continue this tradition of a typical French patisserie combining the spirit of a coffee house with a simple basic dining experience. The menu only has one page but there's always something to eat.

This is where our heart is. We aren't a restaurant but serve as a public meeting place, whether it be for businessmen having a meeting or grandmothers enjoying a cake."

The Auguszts ran their establishment on a very elegant, high-quality basis until 1951, when the communist state took over.

The authorities renamed it Déryné, inspired by the once-celebrated actress Déryné Széppataki Róza, born 1793, died 1872, who often performed on a summer theatre stage in Horváth Kert just around the corner.

The Socialist era does seem to have been a lively period though, with a bar, music and dancing each evening, and plenty of actors around from the summer theatre. But it was also a time of Hungarian ersatz "espresso", curled sandwiches, no pastries and poor service. Rot had set in.

In 2007 the Kovács family made an offer to the district council and took over. The roof was in a life-threatening state, the kitchen was ancient, there was no ventilation and the 200-year-old basement and its underground tunnels were full of Second World War debris.

Almost a year later the whole place had been fixed up with a modern kitchen and the patisserie had been rebuilt. Important original features were retained, such as the white wall tiling, tall wall mirrors and a baby grand piano that had been there for 60 years. Some old wooden waiter stations surfaced from the basement.

The effect when you enter through the original 1914 doorway is near perfect: a historic coffee house bustling with activity that looks and feels nicely authentic. Period photographs show what the rooms looked like back in the days of the Auguszts, and the old charm can still be felt.

After her facelift, the good old lady gives an appearance of being very nicely worn in but without showing the ravages of age.

Even on this Monday evening all tables are occupied inside, and the regulars have their favourite spots: a regulation table, a high table with stools, the long brown couch running all along one wall, a padded comfy chair at the bar or perhaps next to the open kitchen where the chefs toil.

At one point in the evening candles are placed on the tables and the lights suddenly dim. Outside, the autumn chill is settling in and the normally lively terrace, set back from the busy road under red umbrellas, won't be buzzing again until the daytime sun.

In the early morning a small kiosk sells Déryné's variety of own-brand bread and pastries, savoury and sweet. Croissants might be in almond, chocolate or marmalade flavours, for instance.

The bakery is actually the backbone of the place and Déryné is very proud of it. Much loved in the area, it opens at 7am – sometimes with a queue – and closes at 5pm – if it hasn't run out of goodies earlier.

Business people on the way to work call in for breakfast or a lunchtime meeting. When the pianist is on in the afternoon the atmosphere resembles that of a typical French patisserie with the spirit of a coffee house. Déryné aims to suit every time of day and every taste.

The word gets around, because Woody Allen, Tom Hanks, Harrison Ford and Danny De Vito are among those who have dined there when they've been in town.

Once the raw materials for dining have been brought in, says Brigitte Kovács, everything is artisan and made on the premises, from mayonnaise to jam to butter, with no artificial ingredients and using age-old recipes and methods. The only import is ketchup.

"By about your third visit to Déryné Bistro we'll probably already have remembered your name and how you like your coffee," she says. "I know all our customers. We take everything easy and no pressure is applied to anyone. It's not strict or elegant and you should feel like you do at home.

"The opening hours are long and the service is friendly. Because everything is fresh, we may sometimes run out. Our family feels obligated to serve Déryné as an institution, not a business. We try to understand what a coffee house means to people. This is behind every decision we make."