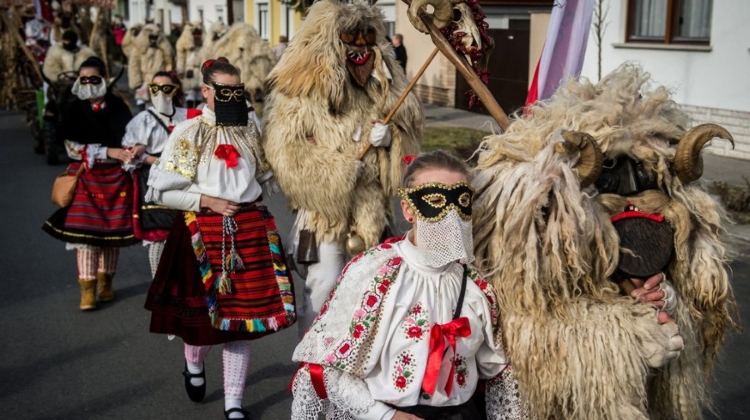 According the legend the native Croatians, who escaped to the moorland of the Mohács Island, grew tired of the Turkish dominations; so they dressed in frightening masks and armed with self-made rattles and noisy instrument they crossed the Danube in boats under the cover of the night to drive the Turks away from Mohács.

The woolly cloaks are fastened up by belts or tethers and a cattlebell is hung on it. In their hands they held the essential rattle or wooden maces with many spikes.

The women, whose faces are covered with veils, the men dressed in wedding clothes and the people dressed in costumes are also part of the masqueraders in Mohács.
Today's Busó parade starts at the Kóló Square, the centre of the old folk custom.

The carnival is celebrated with enormous noise on the bank of the river Danube and in the surrounding streets. At nightfall the masked crowd returns to the main square to dance around the giant bonfire and fool about with people.

1 pm at the Šokac Circle (Sokac Kör, 17 Táncsics Street): Wreath-laying at the memorial plaque of Anka Kersics. Music by the group Komšiluk, followed by the traditional visits of Busós to the houses on Kóló Square and in the surrounding streets

6 pm on Széchenyi Square: Lighting the bonfire – burning of the coffin, featuring the Buso Club

9.30 am  “All dress up for Carnival” – Carnival preparations

4 pm Demonstration of tools and accessories of the Busó Carnival

7 pm Dance house with the Busós with music by Dunavkinje and Mladi Tamburaši at Duna Office House (4-6 Szabadság St.)

2 pm Performances of the folk-dance groups, Busó groups and music groups orchestras on the open-air stage on Széchenyi Square

3 pm Performances of the folk-dance groups, Busó groups and music groups orchestras on the open-air stage on Deák Square

5 pm Opening of the exhibitions “Masks, Busó tools and other handicraft objects of folk art” Exhibition of selected works of Busó-mask carvers, accessory makers and other handicraft masters and “Scenes from the lives of the Šokci people” by painter Mária Pecsuvácz at Kossuth Movie Theater (1 Deák Square), featuring music group Šokadija and the Carnival pipers

10 am in the city centre: folk art and handicraft fair

10 am in the court of the Serbian Church: Performances of tambura ensembles, dance groups and Busó groups

10 am Tastes of Mohács – open kitchen at the Busó Court, cooking with Busó group Vesele Buše

10 am „Jankele Court“ – Get acquainted with the Jankeles. Interactive exhibition and workshop with Busó group Sebaj, Tastes of traditional dishes and dance lesson (Eötvös Str. 6)

10 am on the Folk Stage at the Busó Court: Performances of tambura groups, Busós and dance ensembles

10.30 am Performances of dance groups, music groups and Busós on the main stage on Széchenyi Square

3.20 pm ”Rebirth of the legend” the Drugovi Busó Group remembers the 2nd Battle of Mohács, with wreath-laying at the statue of the Three brave soldiers on Széchenyi Square

4 pm Performance of dance group Zora, then dance house on Széchenyi Square with music by Poklade

6 pm Folk rock concert on the stage on Deák Square

9 am in main street: Folk art and handicraft fair

10 am Tastes of Mohács – open kitchen at the Busó Court, cooking with Busó group Vesele Buše

10 am on Széchenyi Square: Short introductions of Busó groups

10 am Meeting members of Busó group Kolompos and food-tasting in the court of the Serbian Church (1 Szerb St.)

10 am on the stage at the Serbian Church: Performances of bands, dance groups and Busó groups

10 am on the stage at the Busó Court: Performances of music groups, Busós and dance ensembles

10 am „Two in one“ – Two masters of folk art in one creative workshop, 7/a Kígyó St. (with entrance fee)

12.30 pm at Šokac Haven (Sokac-rév): performances of dance groups, pipers and Busós followed by Busós crossing the Danube in boats

1.30 pm on the stage on Széchenyi Square: Folk-dance show of the nationalities

1.40 pm on Kóló Square: Gathering of the Busós and Carnival groups

2 pm on the stage of the Busó Court: Performances of folk dance groups and tambura players

3.30 pm Busó initiation ceremony and welcome speech by the Mayor on the open-air stage on Széchenyi Square

3.40 pm Free Carnival celebration with the Busós in the city center

5.30 pm Music by Mohács tambura groups on the stage on Széchenyi Square

5.30 pm on Széchenyi Square: Lighting the bonfire and dancing Kóló with the Busós

8 pm Dance house with the Busós at Duna Office House (4-6 Szabadság St.) music by the group Bácska (with entrance fee)