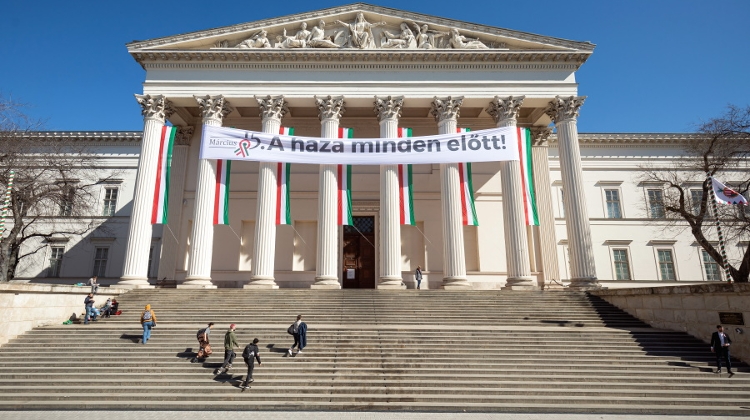 The national flag was hoisted with military honours in front of Parliament on the March 15 national holiday.

The ceremony was attended by President János Áder and House Speaker László Kövér. The single central event of this year’s March 15 national holiday was attended by only a few people in Kossuth Square.

All other central events, including Prime Minister Viktor Orbán’s speech, which had been due to be delivered in front of the National Museum, and the award ceremony of the Kossuth and Széchenyi prizes, have been cancelled due to the new new virus outbreak.

March 15 marks the beginning of the 1848 revolution, part of a series of uprisings in Europe that year. On March 15, citizens of Pest gathered in front of the National Museum and demanded independence from Habsburg rule.

Hungary’s first independent government with Count Lajos Batthyány as prime minister approved a reform package called the April laws. Later, the uprising grew into a war of independence, stifled by Austria and Russia in late 1849.

In his televised address, President János Áder said the strength of March 15 lies in freedom and loyalty. Referring to the coronavirus outbreak, Áder asked Hungarians to commemorate 1848 at home “at this time under more modest circumstances, with a little bit more concern, but with trust”.

If Hungarians were able to trust one another 172 years ago, “we then can count on each other and rely on each other today”, he said. “Despite the historical perspective, March 15 still feels close to us, because this day marks the birthday of a civil Hungary,” Áder said, adding that the history of 1848/49 was full of “outstanding human achievements” that “keep the past alive for us even after such a long period of time.”

“March 15, 1848 is a common legacy and celebration of all Hungarians. Wherever we live in the world, we all remember the young heroes of the revolution and those who fought together under the banner of Hungarian freedom.”

Orbán said this year’s celebration is given a special emphasis by the fact that the year 2020 marks the 100th anniversary of the signing of the WWI Trianon Peace Treaty under which two-thirds of Hungary’s territory was ceded to neighbouring countries.

“Just as 172 years ago, Hungary cannot exist today without the Hungarian communities in Transylvania, Northern Serbia, Southern Slovakia and Transcarpathia, and it is our shared duty and responsibility to strengthen these communities and protect their rights,” he said in his letter.