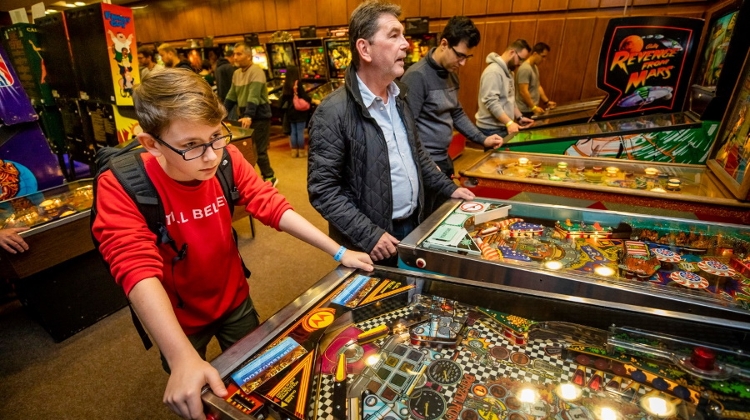 Budapest Pinball Museum organises its arcade game exhibition in Budapest, called Arcadia for the 5th time in a row between the 25th and 27th of September, 2020.

This year the event will feature more than 300 pinballs, video cabinets and other arcade machines, out of which 50 are ones never previously displayed at Arcadia Exhibitions.

This year’s event holds several surprises for the visitors. For instance, on Saturday and Sunday, the event’s new venue, The Budapest Railway Museum’s services (railway, draisine, steam locomotive) will be available free of charge for all Arcadia visitors.

BBC comedy ‘You Rang M’Lord?’ from the 90’s is still widely popular in Hungary. Although pinballs might not be closely associated with this 4 seasons TV show about the late 20’s, according to the organisers, ‘You Rang M’Lord?’ was as integral part of growing up in Hungary in the last few decades as were pinballs.

The following 5 ‘M’Lord’ actors had already agreed to come:

Tickets to the fan meeting (to be held on Friday and Saturday) will be sold on a first come first served basis, for the first 800 persons buying Arcadia tickets. Presale will most probably start in June.

A refund is also available on Arcadia tickets: should you change your mind until the 31st of August, 2020, the organisers give your money back. Refund is of course also available, without a time limit, if the event gets cancelled or any changes in the program occurs (even in the list of guests).

About the organizers:
Budapest Pinball Museum deploys more than 140 machines (pinball, arcade video cabinets and other games), making the venue one of the biggest ongoing pinball collections in Europe.

It is the most popular museum in Hungary, and the 9th out of some 600 Budapest tourist attractions on Tripadvisor. The place was featured, among others, in The New York Times, Sydney Morning Herald, Frankfurter Allgemeine Zeitung, BBC, CNN, and some 100 other leading international media outlets. The machines exhibited in the museum spans the entire history of the game from the 1800s to date.

Budapest Pinball Museum: A Nostalgic Playground For All Ages