Budapest Pinball Museum: A Nostalgic Playground For All Ages 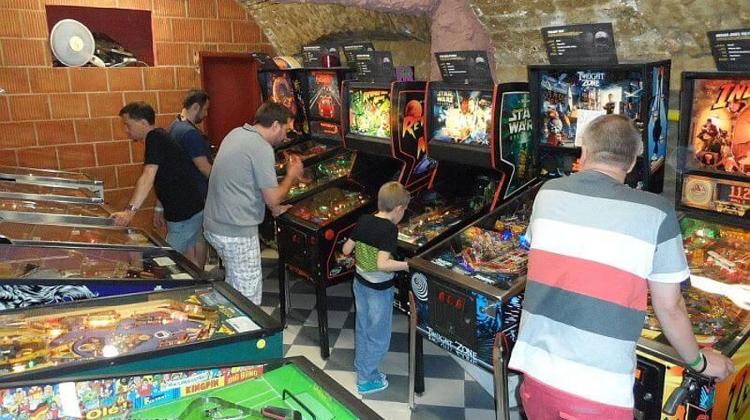 Hidden in a basement in Újlipótváros lies an arcade underworld. Illuminated to flashing lights that would make a Christmas tree blush, the underground chambers stripped back to the brick echo with the sound to rattles, chimes, bleeps and laughter. This might be an unusual attraction, but it’s certainly a hit with visitors.

Visitors the world over make a pilgrimage to Budapest just to check out this quirky, interactive museum dedicated to keeping pinball machines and its tribe alive.

To find out why such a niche museum earned such a high rating on TripAdvisor, while growing a multinational cult following, we paid a visit to see what it was all about.

The foundation behind the museum’s success stems from the passion in which it was created. Owner Balázs Pálfi began with his own modest collection of pinball machines, which grew into a museum where he could share his beloved collection with other pinball fans.

The Pinball Museum has become a nostalgic playground for all ages. From families who come with children, where the smaller members reach up to play the machines by standing on little plastic stools that are readily available tucked under the machines, to couples together on a playful date or even adults who are simply looking for a nostalgic regression back to their childhoods – it’s one of the few museums in the city that can boast such a broad demographic.

But it’s not just a vintage style arcade. Even though visitors can play on the machines to their heart’s content, it is actually a museum, although in a more unconventional sense of the word.

Some of its older pieces qualify as truly unique antiques, like the 1920s table hockey where a few young boys played in one of the side rooms near the entrance, to the classic Humpty Dumpty, one of the first pinball machines ever made with flippers, dating back to 1947.

Pinball’s predecessors are also on display, such as the unique bagatelles from the 1880s, a tabletop ball game that relied more on chance rather than the more modern combination of probability and skill.

The sheer interactive element is the secret behind the museum’s success, which is why the moment the doors close for the day, the epic maintenance measures begin for all the machines so they’re in top-notch playing condition the next morning.

And for those who an alternative space to host a children’s birthday party or an alternative corporate event, there is a private event room tucked in at the back. However, for thirsty players, there is a non-alcoholic bar located by the entrance – perfect for refuelling before the next game.