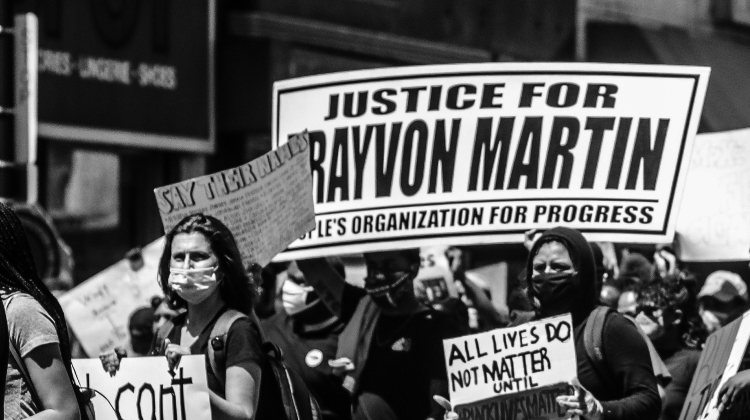 Art succeeds when it triggers different responses from an audience. The reading each observer makes from an artwork can be explained by how they perceive the world and the current social and economic situation. And Péter Szalay’s artwork has accomplished its purpose, in light of the started debate.

Last year, Budapest’s ninth district, Ferencváros, launched a tender for public art and seven artwork pieces won the competition. All of them will be on display at Ferenc Square, for two weeks in April 2021.

Krisztina Baranyi, Ferencváros’ Mayor and one of the organisers of the art competition, defended the piece and the artistic freedom. In her opinion, the Black Lives Matter movement is as important in Hungary, as in any other place in the world.

On the other hand, Prime Minister’s Chief of Staff, Gergely Gulyás, claimed that the movement and the need to erect a statue with this thematic are racist, therefore the piece should not be included in the exhibition.

Behind the recreation of the Statue of Liberty, Péter will use 3D printing to make 12 pieces in thermoplastic, and then assemble the pieces using magnets. The statue, which has in its core values of liberty, peace, human rights, abolition of slavery, democracy and opportunity, is kneeling and holding a tablet with the inscription “Black Lives Matter”. The installation will also have multi-coloured layers, an allusion to the LGBT-rights.

What Patrisse Cullors, Alicia Garza and Opal Tometi have started with the movement #BlackLivesMatter and later, with the organisation Black Lives Matter Global Network Foundation, Inc., was to light a fire of hope around the globe.

They founded the organisation in 2013, while United States of America were suffering an uproar caused by the acquittal of Trayvon Martin’s murderer. Trayvon’s death gained the news media attention, but it was not the only case throughout the years.

Around the globe, many victims of racism and racial profiling have followed. On 25th May 2020, George Floyd was another name added to the list. He was pronounced dead after a white Minneapolis police officer knelt on his neck for several minutes, despite his repeated protests that he could not breathe. 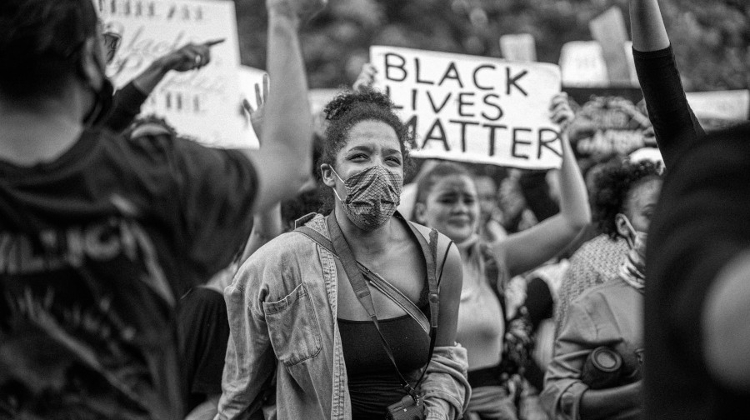 June 2020 sparked several petitions, protests and memorials across the globe, all in solidarity and support to George’s death and so many others. In Hungary, on 7th June 2020, more than 1000 people gathered in front of the US Embassy on Liberty square (Szabadság Tér) for a peaceful Memorial – Szolidaritás a rasszizmus áldozataival.

The goal of the demonstration was to stand in solidarity with all the victims of racism globally, for justice and unity, and for systemic radical positive change. “Racism is a pandemic” and “No freedom until we are equal” were some of the messages written in signs held by the people.

The Hungarian reggae singer G Ras (Gergely Komáromy) led the event with a speech, highlighting the need for empathy, real compassion and love. Minutes of silence and kneeling followed, precisely 8 minutes and 46 seconds.

Starr Session Varga, also known as the blogger Black Girl in Budapest, described the day as overwhelming and emotional, but with a hint of hope: “Black Americans have been crying out for centuries that there is injustice for our people in America.

With the many peaceful demonstrations all over the world, it was beautiful to see the many people in Hungary come out and show their support. As an expat it meant that I wasn't alone in the fight, and that there was a community of people around to support me. It's important to share your voice however far you are away from the problem.”

Written by Dalila Lopes for XpatLoop.com.
Dalila is a Biomedical Engineer, known for her passion about debating and communicating social issues. Her dream is to publish a book, but until then, you can read her blog Lila's Doo-Wop, where she writes about traveling, life and people.