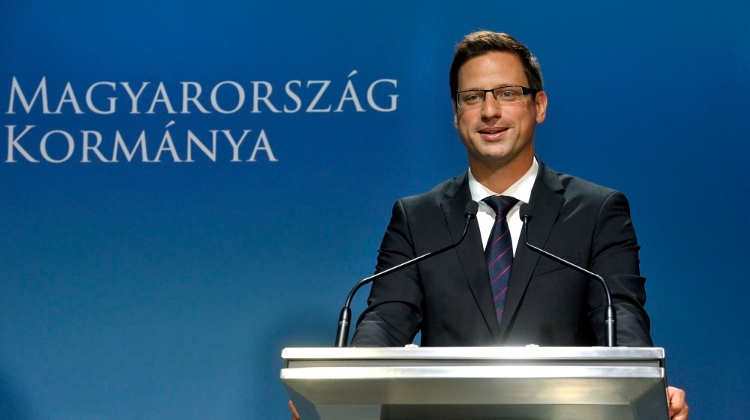 Hungary has been “the first to overcome the coronavirus pandemic” enabling its economy to recover earlier than in other countries, the head of the Prime Minister’s Office told regional daily Északmagyarorszag on Wednesday.

Gergely Gulyás welcomed as a first sign of recovery that industrial output had grown by 16.5% in March, and noted that the finance ministry expected a GDP growth of 4-5% for the full year.

He added that he was hoping for an even higher figure in 2021 and a ratio over 5% next year.

On another subject, Gulyás welcomed that the European Union had made arrangements for coronavirus vaccine purchases, but added that “those vaccines would not have been enough to ensure the inoculation of 55% of Hungarian adults with at least one shot by now”.

He said it had been “ill-advised to make a political out of the provenance of the vaccines”. “Hungary did not make that mistake and Hungarians will regain their accustomed lifestyle earlier,” he insisted.

Fully 82 patients, generally elderly with co-morbidities, died over the past 24 hours, while 1,416 new infections were registered, koronavirus.gov.hu said on Thursday.

The number of active infections has declined to 165,769, while hospitals are treating 2,782 Covid patients, 354 of whom need respiratory assistance.

Since the first outbreak, 795,200 infections have been registered, while fatalities have risen to 28,970.

Tamás Menczer, the state secretary for communications and international relations, said in a video posted on Facebook that the Croatian authorities require Hungarians to present the slip of paper containing the dates of the two jabs they received as well as the plastic vaccination card, and will allow entry from the 14th day after the second shot.

As regards Turkey, the country has agreed to allow non-immunised minors accompanied by parents carrying an immunity card entry, Menczer noted, adding the ministry is negotiating to reach similar agreements on minors with the other countries as well.

“We can talk about travel abroad because our country is far ahead of other European countries in terms of its vaccination drive,” said Menczer.

Hungary is sending 6,000 doses of the AstraZeneca vaccine to North Macedonia to aid the inoculation of 3,000 border guards, Foreign Minister Péter Szijjártó said on Wednesday, after talks with his Macedonian counterpart Bujar Osmani.

Thanks to its policy of buying Eastern as well as Western vaccines, Hungary is now in a position to help other countries, Szijjártó told a joint press conference. Effective protection efforts in other countries will also increase security in Hungary, he said.

As North Macedonia is situated on the Balkan migration route, it has to face the challenges of the pandemic and of migration pressure simultaneously, he said. If they fail to stop the migration wave, it will add to the pressure on the European Union’s external borders, he said.

He thanked Macedonian border guards for their work and pledged that Hungary would continue to send 30 men to serve on the southern border of the country.

Starting on Friday, vaccinated citizens of the two countries will be allowed to travel to each other’s lands without mandatory testing or quarantine, he said.

Osmani said Hungary had been the first to send aid to North Macedonia last year when they saw a shortage of masks.