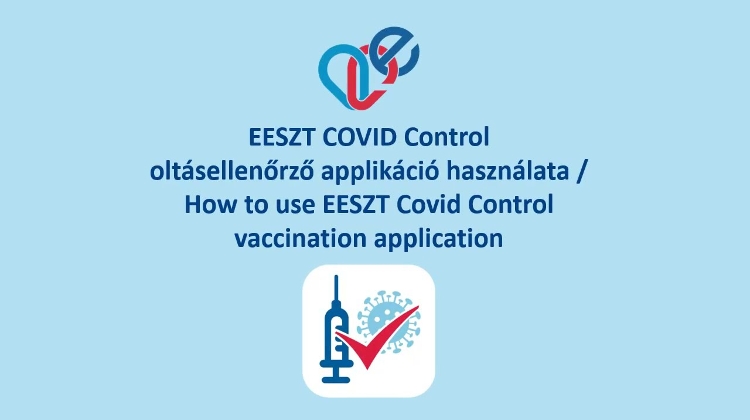 An app that serves as a Covid immunity certificate has been launched in Hungary. The EESZT app available for Android and iOS is currently running in test mode.

To use it citizens must register at www.eeszt.gov.hu. Hungary earlier started issuing plastic Covid immunity certificate cards to citizens who have been inoculated against the coronavirus.

Meanwhile, a new shipment of the Sinopharm vaccine, 1.2 million doses in all, arrived in Hungary on Sunday.

With the latest delivery, Hungary has received a total of 4.5 million doses of Sinopharm, Péter Szijjártó, the foreign minister, told MTI.

Hungary, he added, was grateful to China for making the delivery over two weeks in advance of the May 31 deadline.

“Certainly, every day counts,” he said.

So far 6.5 million vaccine doses “from the East” have arrived in Hungary, he said, adding that without them the current number of recipients of jabs would not have reached 4.6 million.

The minister noted that the World Health Organization (WHO) recently approved the Sinopharm vaccine.

“Everyone can rest assured of this vaccine’s efficacy and safety.”

Fully 38 patients, generally elderly with co-morbidities, died over the past 24 hours, while 426 new infections were registered, koronavirus.gov.hu said on Monday.

The number of active infections has declined to 138,384, while hospitals are treating 2,259 Covid patients, 258 of whom need respiratory assistance.

Since the first outbreak, 798,573 infections have been registered, while fatalities have risen to 29,213.

There are 16,297 people in official quarantine, while 5,649,027tests have been officially carried out.

At the same time, the pandemic is not over yet, Orbán warned, and urged Hungarians to observe the regulations “necessary for a safe life.” So far, 4,483,598 people have been inoculated, Orbán said, adding that the country may pass the five-million mark by the end of May, “maybe even around Pentecost”.

Restrictions regarding wedding celebrations and other events, as well as the curfew currently imposed between midnight and 5am, will be lifted then, he said.

Immunity certificates will be required to attend “certain events drawing large crowds” until early to mid-August, he added. The total tally of vaccinations may reach 6 million in Hungary, he said, adding that it was the personal responsibility of Hungarians whether they accepted the vaccine.

Meanwhile, Orbán slammed the opposition for its “pathetic failure on the pandemic front”. Protection against a pandemic is a national cause, and “trying to dissuade people from taking the vaccine or sowing mistrust against certain products is more than just a mistake,” he said.

Commenting on Hungary’s inoculation rate, ranked 10th in the world and first in the European Union, Prime Minister Viktor Orbán said in an interview with public broadcaster Kossuth Radio that it was a “good result … but the race is for the lives of Hungarians”.

While Hungary’s vaccination campaign is among the best, “compassion and help in dealing with pain will have to be a priority,” Orbán said, as “we have sustained heavy losses”.

EU countries lag behind the Hungarian vaccination plan by 1-2 months, Orbán said, adding that Hungary is inoculating 16-18-year-olds “while Western Europe is still [vaccinating] pensioners.” He thanked the Hungarian youth for over half of them registering for the vaccine.

There are currently 944,000 people who have registered but did not take the available vaccination, Orbán said.

They are presumed to be waiting for vaccines currently not in stock, he said.

“Right now, that is mostly Pfizer,” he said, adding that once the 16-18-year-olds have been inoculated, 150,000 adults will be able to get the Pfizer vaccine ever week.

Orbán said that based on a report by the working team on vaccine management, sufficient amounts of vaccines are on stock in case a third jab is needed, possibly in the autumn or in the first quarter of next year.

Meanwhile, the government will start a campaign on Monday to encourage Hungarians abroad “from Tierra del Fuego or Patagonia to Miercurea Ciuc”, to register for vaccination in Hungary if they want to get the jab, he said.

Regarding his Thursday meeting with research biologist Katalin Karikó, the patent holder for mRNA-based vaccines, Orbán said her assertion that the method developed by her research team enabled swift responses to new virus mutations “should boost the nation’s sense of security”.

Hungary employment back at pre-crisis level

The work of doctors and nurses has greatly contributed to economic performance because “they cured everyone humanly possible”, Orbán said. He added that only 2,600 Covid patients were now in hospital, including 338 on ventilators and some 608,000 had recovered.

Finance Minister Mihály Varga has done “an excellent job in putting together next year’s budget” covering such expenses as the gradual reintroduction of 13th month pensions, the payment of pension premiums and tax exemption to under 25 year-olds, Orbán said.

The 2022 budget will enable Hungary to embark on an outstanding growth path in European comparison and to emerge stronger from the crisis, he added. Orbán said the operative body responsible for overseeing the relaunch of the economy and “life beyond economy” will be set up next week.

Meanwhile, family support measures such as tax allowances after children must be further increased along with other incentives to convince families that having more children makes them better off financially, Orbán said.