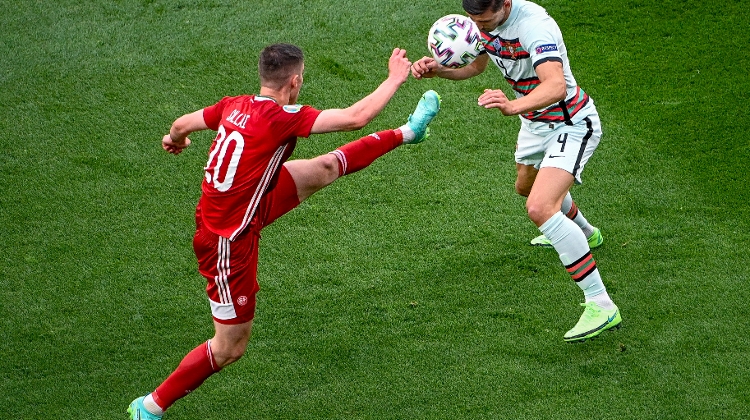 A brave and often hugely impressive counter-attacking display from Marco Rossi's Hungary invigorated a 61,000 crowd in the Puskás Aréna in Budapest on Tuesday evening, but three goals in the last ten minutes gave Portugal victory in the two teams' opening European Championship encounter.

Reigning European champions Portugal certainly dominated possession and fully tested Hungary goalkeeper Péter Gulácsi on several occasions, but it was by no means one-way traffic and a near-capacity crowd must even have thought substitute Szabolcs Schön had won the game for the hosts late on, but his finish after a darting run was ruled out for offside when the game was still goalless.

Instead, a low Raphael Guerreiro shot from just inside the penalty area deflected off the unlucky Willi Orbán and into the net for Portugal's first goal in the 84th minute, a penalty was awarded against Orbán three minutes later which Cristiano Ronaldo converted, thereby breaking the European Championship all-time goalscoring record, and the same player showed great control to go around Hungary goalkeeper Péter Gulácsi and slot the ball into an empty net again in added time after doing well to stay onside.

Before the match, Hungary head coach Rossi had opted for a 3-5-2 formation with Gergő Lovrencsics at right wing-back and Attila Fiola in a less familiar position on the opposite side.

The pattern of the game was set early on when Portugal created the first chance, Gulácsi diving to his left to beat away Diogo Jota's fierce strike in just the fifth minute.

In the 26th minute, only a superb last-second challenge from Willi Orbán prevented Bernado Silva from latching onto Ronaldo's sweet pass deep inside the Hungary penalty area.

Although Portugal were dominating, Hungary still sought to trouble the opposing defenders during their rare forays forward.

Ádám Szalai earned a free kick out on the left but his header from Roland Sallai's inswinging cross was well claimed by Rui Patricio under his crossbar.

Cristiano Ronaldo missed a golden chance from close range in the 43rd minute as the home hung on for the half-time whistle.

Both sides had early sight of goal in the second half, Pepe's downward header drawing another impressive save from Gulácsi diving down towards his right post before Ádám Szalai found room to shoot 20 metres from the Portugal goal, but Rui Patricio was well place to gather the ball.

With just over 20 minutes left, Bruno Fernandes forced Gulácsi into a sprawling finger-tip save with an 18-metre effort but it wasn't quite all one-way traffic, Sallai scuffing a right-wing cross just wide from ten metres and Schön straying offside just when he had a clear run behind the Portugal backline on the right, his shot squirming under Rui Patricio but ultimately being disallowed.

Then the floodgates opened at the other end and a tiring Hungary were somewhat harshly punished for late errors.

Rossi's charges take on France in the Puskás Aréna on Saturday afternoon next, while Portugal face Germany in Munich later the same day.