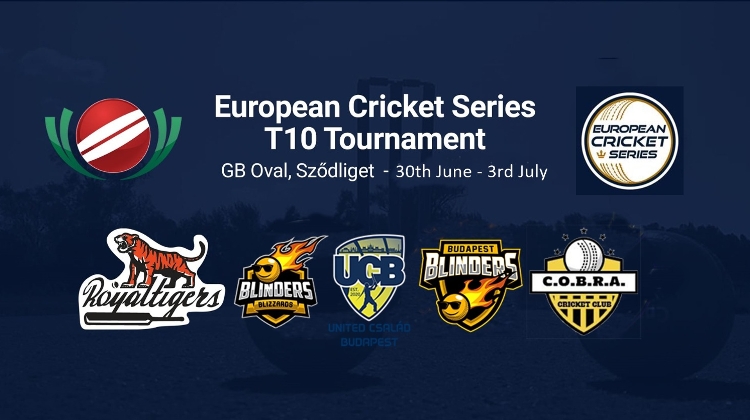 Five teams are now showcasing their skills, until July 3rd, in the FanCode European Cricket Series which is now underway here.

Every game is streamed online on the European Cricket Network and on FanCode - a multi-sport aggregator platform, from the house of Dream Sports for the Indian Sub-Continent.

ROT will be eyeing the silverware once again under the leadership of Marc Ahuja, also the skipper of the Hungarian national team.

Cobra finished runners-up, pushing the Tigers all the way, and will aim to go one better in Budapest this time around. Satyadeep Ashwathnarayana is the figurehead, club founder, president, ex-captain, vice-captain and wicket keeper of the Cobras.

Budapest Blinders, Blinders Blizzards, and United Család are all making their ECS debuts.

While Budapest Blinders are a new team, BUB can boast a talented all-rounder in Steffan Gooch, holder of ECS record bowling figures of 6-2 from last summer and cousin of England legend Graham Gooch.

Blinders Blizzards are the second string of Budapest Blinders, led by Sachin Chauhan who has been a fixture in the Hungarian cricket scene for the past six seasons.

Rahul Goyal has been in great form with bat and ball this season and will be one to watch, along with big-hitting Turkish all-rounder Onur Ozkul.

United Csalad are another new side, but many of their squad featured for Dunabogdány CC and Baggy Blues last time around in Hungary, including the talented player Vinoth Ravindran.

United Csalad has high hopes in Ashrith Darapureddy in his first season in Hungary, who is a quality left-arm spinner and top-order batter who has played at a decent level in India. He once hit 11 sixes in a T20 game.

Sződliget in Pest county, Hungary, is situated on the east bank of the Danube, and has good train and road links to Budapest.

By train: From Nyugati station direct to Szodliget (direction Vac),

More about the tournament is available online here.