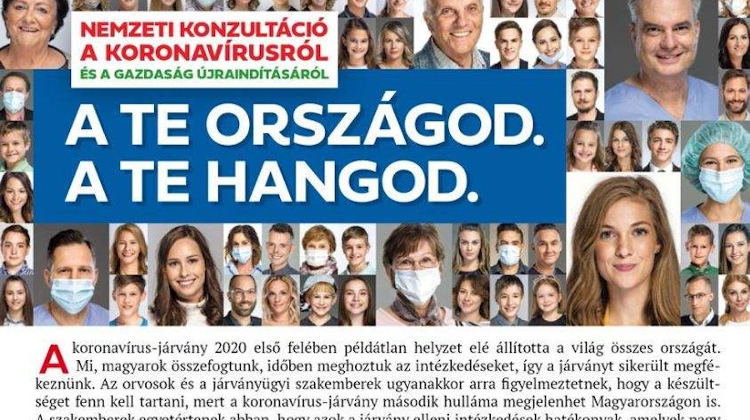 The government's new National Consultation public survey contains 14 questions covering a variety of issues, including the minimum wage and the moratorium on loan payments.

Voters have until Aug. 25 to return the questionnaire.

The public is asked whether the minimum wage should be raised to 200,000 forints (EUR 575) per month so that not only companies but also the Hungarian people enjoy the benefits of economic growth.

The government asks whether family support, pensions and low labour taxes should enjoy constitutional protections to prevent future governments from depriving the public of them in times of crisis.

Whether Hungary should enjoy the lowest taxes on labour in Europe and whether a planned measure to allow parents earning below the average income the chance to reclaim their 2021 personal income tax in 2022 if Hungary’s growth rate exceeds 5.5% in 2021 are also matters to be put to the public, as well as whether the moratorium on loan repayments should be extended from the current deadline of September to July 2022 for families and businesses in trouble.

Should Brussels be Allowed to ‘Impose its Will on the Hungarian People’? Survey

The National Consultation asks whether Brussels’ plans to launch procedures against Hungary and “impose its will on the Hungarian people” are acceptable or not.

The survey is meant to gauge public response to the climate tax Brussels has proposed levying on Hungarian families’ flats and vehicles to finance the costs of reducing pollution caused by multinational companies and tackling climate change.

The questionnaire also covers the recently adopted anti-paedophile law that triggered massive international protest by organisations the government says are financed by US billionaire George Soros.

The National Consultation survey asks people whether Hungary should stand against illegal migration to Europe or yield to pressure from “Soros-backed organisations”.

The public is also asked if those arriving from pandemic-hit countries should only be allowed to enter Hungary’s territory if they hold a valid immunity visa.

Another question asks whether the plan in Brussels for the mandatory resettlement of migrants should be allowed to go forward in the post-pandemic years.

The survey also gauges people’s opinion on the government’s proposal to put a hold on migration to Europe for a period of two years after the pandemic.

The last question is about the need for Hungary to reduce its dependence on foreign vaccines in the era of pandemics by establishing a vaccine factory of its own.