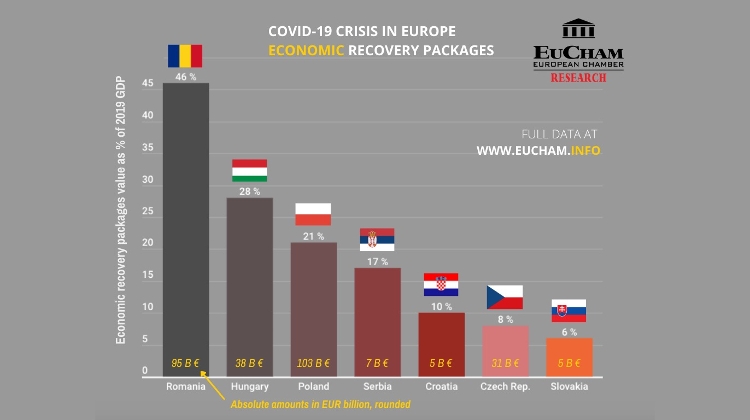 A study carried out by EuCham - European Chamber, together with the help and contribution of the governments of different European countries, including Hungary, shows a general comparison of the financial expenditure executed by each of the governments in search of the longed-for economic recovery during the COVID-19 crisis.

The differences in spending between 46 countries in the same continent, give a glimpse of the big disparities in the responses given.

The significant variability shown by these figures raises questions. Given that a large part of these figures correspond to loans that will have to be repaid, have the countries that have spent the most done the right thing?

Patricia Lojo, a researcher for this comparative analysis, states: “The government of Hungary has made a higher expenditure compared to its neighbours Slovakia and Croatia, but much lower than other countries such as Poland and Romania”.

In order to have a fair comparison between the different economies, the absolute amounts have also been recalculated in relation to their respective 2019 GDP (Gross Domestic Product).

Financial spending and government efforts differ heavily between countries, and this will be one of the factors influencing recovery and how the well-being of their economies will look in the future Michele Orzan, the president of the European Chamber with extensive knowledge about Eastern and Central Europe, points out that the Hungarian government took the decision to be somewhere in the middle between higher and lower spending, on the basis of its economy: “Borrowing excessive money may lead countries to face a tougher situation than the one they are trying to address, due to the additional debt that they will have to cope with in the future”.

Orzan continues: “However, in the context of the coronavirus outbreak, the economy needed to be supported by governments to compensate for the negative effects caused by the crisis”. That's why he suggests keeping an eye on sustainability and concludes with the following reflection: “It is not who spends the most, but who spends the smartest."

According to the president's statements, Patricia Lojo adds: “To ensure a faster economic recovery, the government should maintain a supportive fiscal policy, strengthen measures to preserve jobs especially in the areas more affected by the crisis, boost policies that support productivity and improve business environment”.

Patrik Kovács, the EuCham board member representing Hungary at Business at OECD as president of the SME & Entrepreneurship Committee, acknowledges: “It is a challenging situation, but to ensure the recovery, the right policies supporting companies and the entire economy are the best response."

In order to better understand these numbers, the amounts can be compared from different angles, such as per capita expenditure.

The governments of the countries will have to demonstrate the reasons for these large differences between one country and another, especially when the money spent brings, or does not bring, the desired benefit.