How Celebrity Chinese Chef Master Wang & Fruccola "Found Each Other" 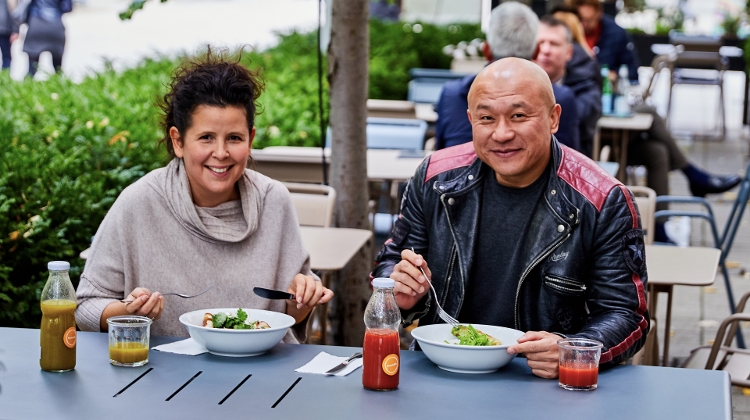 When entering Fruccola, you may have noticed that an interesting-sounding dish appeared on the menu recently: the so-called ‘biangbiang’ noodles. Thanks to a fresh and crispy collaboration, the legendary noodles of the most famous Chinese chef in Hungary, Master Wang, can be tasted in Fruccola restaurants.

“I’ve already tasted biangbiang noodles before, it’s been very-very tasty and I’ve been looking for it since the first tasting. I also wanted to show it to our guests. However, the thing is that I couldn’t get it anywhere. So far. That’s how I got the idea to have these Chinese noodles on the menu” - says Petra Saás, one of the owners of Fruccola.

Biangbiang is originally from China, more precisely it’s from the north-western Chinese province, Shaanxi, where biangbiang is also referred to as one of the 8 wonders of the region.

Centuries ago it was mainly the food of the poorer, but today the biangbiang enjoys great popularity not only in the small Chinese buffets but in the high-class restaurants as well.

The Chinese spelling of the word “biáng” also helped a lot, as it’s one of the most complex and most exciting characters in the Chinese language: the traditional version consists 58 strokes.

The peculiarity of the note was inspiring for Master Wang as well, which is why he also chose Biang as the name of his downtown buffets. And that’s how and where Petra met the noodle.

“I thought that the difficulties of this recent pandemic period have made the hospitality actors more open and I thought there is also a greater need and willingness to cooperate. That’s why I dared to contact Wang to see if he would be interested in such a joint work” - the owner of the Fruccola explains.

“I’ve known the Fruccola before and I’ve even been to their restaurants several times” - says Master Wang, who immediately adds that he found the cooperation project interesting from the very first second.

So far there was no example of supplying raw materials to other restaurants. Especially not his noodles. “I’ve been thinking about similar projects earlier too, but I didn’t have the time and energy to make it real. So this request from Petra came just in time, I was very happy about it.  I think it’s a great idea” - he says.

“I think that it would be extremely important nowadays that the participants in the hospitality sector get together and get to know each other’s working methods and products. I believe that this can be one of the keys to long-term survival. Unfortunately, I think this kind of cooperation is still quite rare. That’s why I was surprised that Master Wang nodded so quickly, honestly and with a smile to work together” - Petra explains.

She also adds that there is a lot of work behind it, as they have a lot of questions about the biangbiang in the Fruccola. There are many questions about how it behaves, what works with it, what’s good about it, what’s not and so on. For the time being, however, this process is exciting for both parties.

“Wang didn’t start this cooperation either, because that’s how immeasurable wealth will fall on him. This is not about selling thousands of servings a day. It is much more important to get to know each other and be able to call each other  with a calm heart if there is a challenge to be solved or there is a need for help. Plus, we get inspired by each other” - Petra says.

The biangbiang noodles available at Fruccola are, of course, not the same as what guests may have already known at Biang Bistros. More specifically, the garnish, the seasonings and the toppings are not the same.

The ginger-soy, slightly spicy sauce is given by Wang, but the rest of the steps are made by the Fruccola. The noodle is served with small onions and lotus roots.

You can also taste it in vegetarian, chicken and crab-salmon versions. “It’s up to everyone to decide which direction to go” - Petra adds.

The two parties’ joint work is not over here: through the FruccolaBird application (and thus the Fruccola’s hot food vending machines) several dishes are made available and can be ordered.

For example the Yu Xiang chicken, which is based on Wang’s secret recipe for Yu Xiang sauce, which is delivered with rice topped and crispy vegetables. It is said to be slightly hot and spicy, and essential for the necessary endorphin production of your body.