Video Update: 'Every Refugee From Ukraine Must be Helped', Says PM Orbán 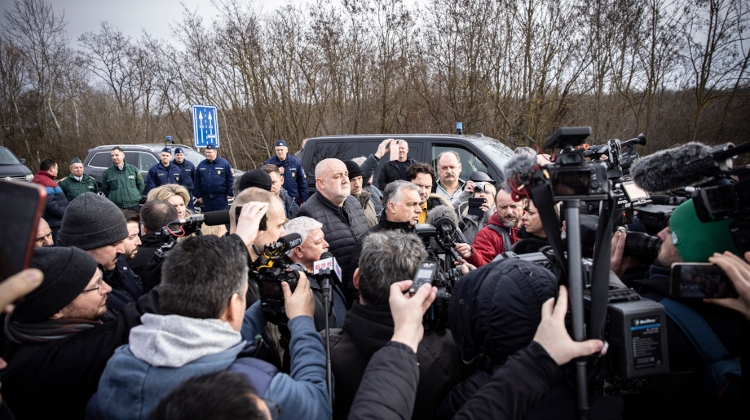 Every refugee arriving in Hungary from Ukraine must be assisted, Prime Minister Viktor Orbán said in an interview on Sunday evening.

Refugees arriving from neighbouring Ukraine “can be assured they will be welcomed by friends in Hungary”, Orbán said on news channel M1.

“We’ll feed them, shelter them and provide for their children,” he added. He said assisting refugees from Ukraine is an “elementary human, Christian instinct”.

Commenting on the show of support for the refugees by Hungarians, Orbán said. Hungary “is a good country, with good people”.

He said one doesn’t have to be a “rocket scientist” to see the difference between “masses arriving from Muslim regions in hope of a better life in Europe” and helping Ukrainian refugees who have come to Hungary because of the war.

The Hungarian Army has all of the weapons it needs to defend the country’s eastern border, if necessary, Prime Minister Viktor Orbán said in an interview on Sunday evening. He noted that Hungary started to develop its defence industry several years earlier, but “the factories are only now being built”.

“Even if it wanted to, Hungary couldn’t put military equipment at the disposal of others, but it doesn’t want to,” Orbán said.

He said Hungary’s defence industry developments were launched “in preparation for peace”, adding that the coming decade would be about “who can ensure security for their own country and the everyday lives of their own people”.

He said a “war of information” is underway and cautioned against disinformation. Orbán said the upgrade of Hungary’s sole nuclear power plant at Paks and the matter of energy must be excluded from the issue of sanctions, “otherwise we’ll pay the price of the war, which nobody wants”.

Orbán conceded that he is “no believer in the benefit of sanctions”, but said “there’s a war going on, and it’s not the time to be clever, but to be united”.

“Whatever sanctions EU member states agree on, we’ll back them,” he said. Reports to the contrary “are lies”, he added.

Orbán warned that the longer the war drags on, the greater the risk that there will be targets in Transcarpathia, bringing the war “closer to us”.

He said “those people in Brussels” can’t be counted on to defend the EU’s external borders, noting the lack of EU financial assistance for Hungary’s defence of its southern border during migrant crisis.

“That’s why we need NATO, because if danger approaches Hungary’s border…only within the bonds of NATO can we ensure the full defence of Hungary,” he said.

Hungary is a “friendly place” for people arriving from Ukraine, Prime Minister Viktor Orbán told journalists during an inspection of the border with Ukraine in Beregsurány on Saturday.

Orbán said the front line is far from Hungary for the time being, but stressed that military action in Transcarpathia, the westernmost region of Ukraine, bordering on Hungary, must also be anticipated. He said “soldiers and mayors must step up their discipline” as the front line moves closer to Hungary.

He added that the coming weeks “will require stronger composure, because we don’t want to become involved in this armed conflict”.

Answering a question, Orbán said speculation that Hungary was the only EU member state to oppose Russia’s exclusion from the SWIFT global interbank payments system was “fake news” and warned that “disinformation is commonplace in war”.

“Hungary made it clear at the EU summit on Thursday that it supports all sanctions on which there is consensus in the EU. We’re not blocking anything,” he said. Assessing the situation at the border, Orbán said the willingness of local councils and authorities to help would see them through these difficult times. In spite of the severity of the situation, work is proceeding in a calm and organised manner, he added.

Orbán said Hungary is letting in everyone crossing the border from Ukraine, even those without travel documents and people from third countries, after the appropriate screening. Even though work is “going smoothly”, he warned that “the hard part is yet to come”. Orbán acknowledged the hospitality and willingness to help of local residents.

“I see there is a Hungarian-Ukrainian friendship among those who live here that is now a tangible advantage to Ukrainians,” he said.

Answering further questions, Orbán said he and a number of other European leaders, including the German chancellor and the French president, had put peace initiatives to Russian President Vladimir Putin during the past ten days.

“We did everything that was humanly possible to avoid war, but all efforts by the EU proved to be without success,” he added. Now, he said, efforts should be focused on turning from war to peace. He added that Hungary has implemented EU sanctions.

Asked whether Hungary would accept Ukrainian men escaping conscription, Orbán said anybody who enters the territory of Hungary is under Hungarian authority, “so we’ll help everybody”. “The rule is that all refugees must be assisted.”