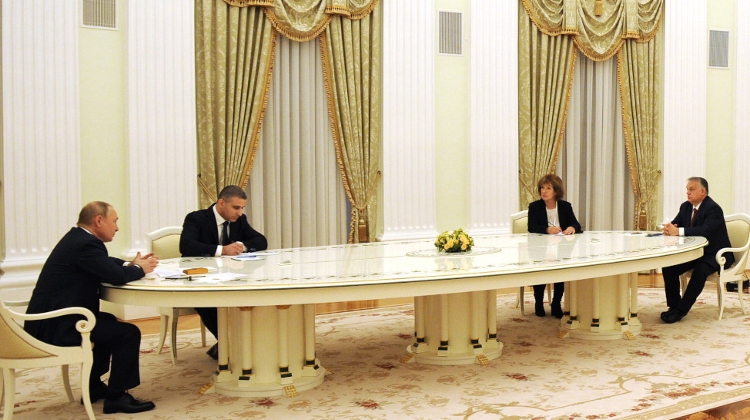 In their five-hour meeting on Tuesday, Prime Minister Orbán and President Putin discussed economic cooperation between Russia and Hungary. Among other things, they agreed that Russia will increase the volume of natural gas transfers by one billion cubic meters a year to Hungary.

President Putin said that in Europe, Hungary buys Russian gas at the lowest price. President Putin and PM Orbán also discussed the Ukraine crisis. Prime Minister Orbán said that no European leader wants war with Russia, adding that Hungary as member of the EU and NATO wants to maintain good relations with Moscow.

At the same press conference, in his first public remarks on the Ukraine crisis for several weeks, President Putin accused the West of breaching an agreement with Moscow by admitting former Warsaw Pact counties to NATO.

Magyar Nemzet’s László Szőcs sees the meeting as a ‘diplomatic bravura’.  The pro-government columnist thinks that despite Moscow’s tense relations with the EU and NATO, President Putin and PM Orbán brokered deals that are beneficial for both countries, including gas transfers, the opening of a Sputnik vaccine factory in Hungary, the possibility of more direct flights between the two capitals and speeding up the Paks II nuclear plant project.

Such economic deals serve the interest of Hungary, and are purely of a business nature, rather than part of greater geopolitical arrangements that Hungary as a small country has no leverage over anyway, Szőcs contends.

In Heti Világgazdaság, by contrast, Gábor Kovács writes that Putin used PM Orbán for his own purposes without offering anything meaningful in return. The liberal commentator downplays the importance of the announced trade agreements.

He suggests that some had in any case already been agreed on, and the rest are simply vague promises, lacking concrete detail. As for the natural gas deal, Kovács notes that as market prices will change in the future, it cannot be taken for granted that Hungary made a good deal in the long run. Kovács also believes that President Putin will use PM Orbán’s endorsement to strengthen his image in Russia through the state media.

The most important message of the meeting, as he sees it, was President Putin’s demand that Eastern European countries should not be part of NATO. This applies to Hungary as well, even if President Putin did not mention the country by name, Kovács concludes.