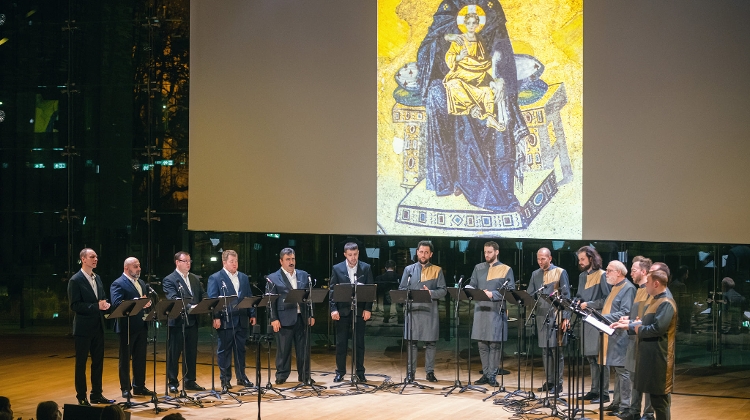 On February 19 at 6:30 p.m Saint Ephraim Male Choir - which is celebrating its 20th birthday this year - will participate in the mass at the Parish Church of St. Teresa the Great in Avila, then will give a free concert.

There will be a double premiere with two new works by Miklós Fehér written specifically for the St. Ephrem Men's Choir. Anastasia Bednarik plays the organ in the first piece, and then Miklós Fehér's Requiem is performed.

From the very beginning, the promotion of Hungarian contemporary classical music and the presentation of new works have been of paramount importance for the vocal formation, which is unique in Hungary.

Several contemporary masters - László Sáry, Barnabás Dukay, Miklós Mohay, Péter Zombola, Péter Tornyai, Boldizsár Csiky - loves the unique sound of the 20-year-old Saint Ephraim Male Choir and so composed works for the ensemble and many others wrote pieces for the ensemble. Among them is Miklós György Fehér, whose works have been sung by the male choir for more than 10 years.

On February 19, 2022, at 6.30 pm, a double premiere will take place in the parish church of St. Teresa the Great in Avila (Address: Budapest, Pethő Sándor u. 2, 1065) as part of a free concert following the mass. Two new works composed by Miklós György Fehér written specifically for the Saint Ephraim Male Choir will be presented.

At the evening Mass, a mass composed for men and organ will be played, in which Anastasia Bednarik will play the organ. After the four-part mass, the audience can also listen to Miklós György Fehér's Requiem.

Miklós György Fehér is a composer, born in 1951 in Budapest. From 1956 to 1971 he studied piano, oboe and composition at the Bartók Conservatory in Miskolc, then in Budapest and later again in Miskolc, and then in 1976 at the Liszt Ferenc College of Music where he received his diploma in composition.

Hungary’s most popular chamber vocal ensemble was established in 2002 by Tamás Bubnó, Hungarian Artist of Merit and Liszt Award laureate. The choir’s name comes from Saint Ephraim the Syrian (306-373), who was a celebrated hymn composer, aptly nicknamed “harp of the Holy Spirit’ by his contemporaries.

They consider the establishment of intercultural dialogue to be a kind of peace-building role between the East and the West, but at the same time they put great emphasis on the playing of new compositions of European contemporary music and the nurturing of the Hungarian male tradition (Liszt, Bartók, Kodály).

In 2012, the Saint Ephraim Male Choir received the Pro Cultura Minoritatum Hungariae Award for nurturing Ruthenian ethnic culture, and in 2014 it received the Hungarian Heritage Award. In the same year, the General Assembly of the Capital of Budapest awarded them Budapest Brand Award for their outstanding cultural and artistic activity.

They have performed with renowned musicians such as King's Singers, Lebanese singer Abeer Nehme, are regular contributors to the productions of the State Folk Ensemble and the Danube Artists' Ensemble, and are happy to tour other genres with performers such as Anna and the Barbies, Palya Bea and László Dés, Gábor Presser, János Lackfi and János Háy writers, as well as the Óbuda Danubia Orchestra, the Szent István Orchestra and the Budapest Strings.