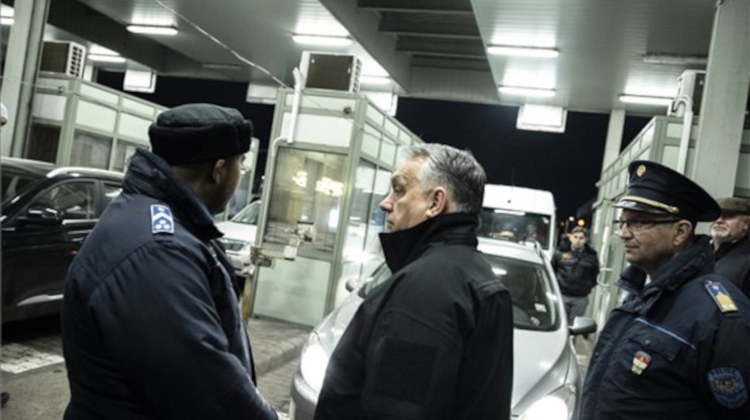 With an increase expected in the influx of refugees from Ukraine next week, Hungary must strengthen its border crossing point with Romania at Csengersima, Prime Minister Viktor Orbán said on Facebook on Wednesday night.

Orbán inspected the Csengersima border crossing between Hungary and Romania on Wednesday evening.

Orbán, who was accompanied by government spokeswoman Alexandra Szentkirályi and others, was briefed by senior police officers on the situation along the border section and the growing wave of Ukrainian refugees in the area.

The prime minister then visited the volunteers at the local aid point of the Hungarian Red Cross.

On Thursday morning, the prime minister handed over documents granting temporary residency to a refugee family arriving from Ukraine. Orbán and Sándor Pintér, the interior minister, later on Thursday visited a centre in Nyíregyháza, in north-eastern Hungary.

At the centre, disaster management staff and other state agencies register the number of refugees, arrange for their transportation, as well as their accommodation.

The Hungarian, Greek and Slovenian ombudsmen on Thursday visited the Ukrainian-Hungarian border and were briefed of the current circumstances and the measures taken to help Ukrainian refugees, the Hungarian ombudsman’s office said.

Ákos Kozma of Hungary, Andreas Pottakis of Greece and Peter Svetina of Slovenia visited the border crossing at Záhony-Chop (Csap) and an aid point in Beregsurány where Kozma also inaugurated a temporary office of the Office of the Commissioner for Fundamental Rights in Hungary, the statement said.

Kozma said office employees had been working on the border since the Ukraine-Russia war broke out three weeks ago. They provide legal aid and help in procuring documents to refugees arriving through Záhony, he said.

Many requested information on travel documents or employment in Hungary, he said. Since the war started, over 438,000 refugees arrived in Hungary from Ukraine, he said.

Pottakis, who also heads the European office of the International Ombudsman Institute (IOI), praised the Hungarian office’s efforts for refugees.

The IOI will support Hungary further, and Greece is also offering legal, financial and humanitarian support, he said.